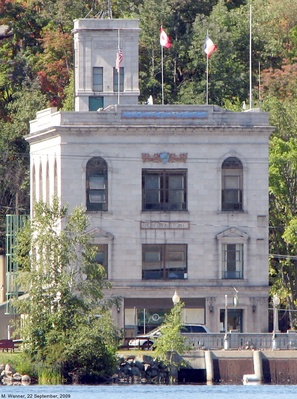 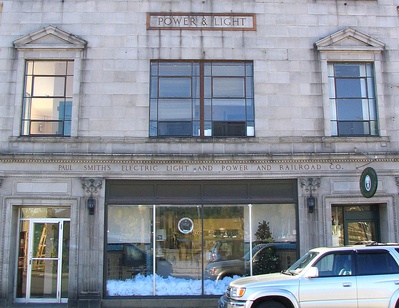 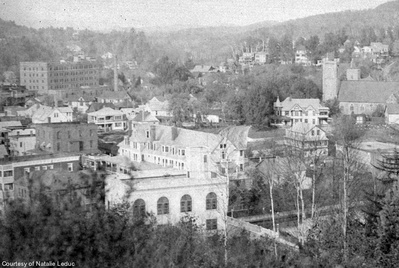 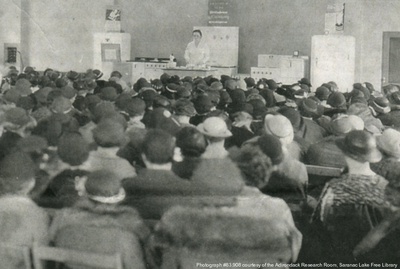 Architect: John Sweeney's name appears on some of the drawings for the building.

Paul Smith's Electric Light and Power and Railroad Company Complex was the headquarters of Apollos (Paul) Smith's major operations apart from his hotel.

The site was first developed by Captain Pliny Miller who, by 1827, had established a dam and a sawmill at a natural waterfall on the Saranac River.

In 1894, the Saranac Lake Electric Company was formed to generate electricity at the site of Miller's sawmill. In 1905, Paul Smith and his two sons formed the Paul Smith's Electric Light and Power Company based at Franklin and Union Falls. In 1907, Smith bought the Saranac Lake company for $125,000 and substantially modified the plant, which at that time was housed in the power house — the rear section of the building.

After Smith's death in 1912, his son, Phelps Smith took over, and in 1927, constructed the present office building directly above the old flume. The building is a three-story, Neo-classical steel frame, terra cotta structure with an electric elevator.

After Phelps Smith died in 1937, leaving the bulk of his estate to establish Paul Smiths College, the College owned and operated the power company until 1941 or 1942, when the equipment was scrapped to aid the war effort. The Paul Smiths Power Company merged with Niagara Mohawk in 1966, and NiMo used at least the first floor of the building — otherwise vacant — for its offices until 1986, when the village of Saranac Lake acquired the property. 1

WE, the subscribers, constituting all the stockholders of the Paul Smiths Electric Light and Power Company, a domestic corporation of the State of New York, incorporated under the transportation corporation law of said State, having not less than five stockholders, and being actually engaged in carrying on business in this State, all being persons of full age, and all being citizens of the United States and residents of the State of New York, by this its amended certificate of incorporation, do hereby, pursuant to Section 31 of Chapter 39 of the laws of 1890, and the acts amendatory thereto, the same constituting Chapter 39 of the general laws, known as the railroad law, certify: —

1. The name of the corporation is to be the Paul Smiths Electric Light and Power and Railroad Company.

2. The term of its existence and the number of years it is to continue Is fifty years.

3. The specific objects for which it is organized and incorporated are the following, via: Manufacturing, generating and using electricity for producing light, heat and power, and in lighting streets, avenues. public parks and places and private buildings of villages and towns within this State as follows, to wit: in the towns of Brighton, Franklin, Bellmont and Harrietstown. Franklin County, New York, and in the towns of St. Armond and North Elba, in the county of Essex, New York, and in the towns of Black Brook, Saranac and Dannemora in the county of Clinton, New York, and in the village of Saranac Lake in said town of Harrietstown, and in the village of Lake Placid, in said town of North Elba, and in the village of Bloomingdale, in the town of St. Armand, to build, construct, maintain and operate a standard gauge surface railroad, or railway, to be operated by electricity as a motive power, extending from Lake Clear railroad station, in the town of Harrietstown, in the county of Franklin, to Paul Smith’s hotel, in the town of Brighton, with a branch leading from said main line to the Upper St. Regis Landing, in the said town of Harrietstown.

4. The total length of said road is nine miles, and the termini thereof are the said Lake Clear station, Paul Smith's hotel and St Regis Landing, and the whole thereof is situate less than twenty-one miles from the power station of said company.

5. The whole length of said road extends within the county of Franklin.

6. The amount of capital stock is one hundred thousand dollars.

7. The number of shares into which the capital stock is divided is one thousand, and the whole thereof is common stock.

8. The company has, and is to have, five directors.

11. The principal offices of the company are situated at Paul Smiths, in the town or Brighton, in the county of Franklin and State of New York.

12 The name and post office address of each subscriber to the certificate, and the number of shares of stock he agrees to take are as follows:—

In witness whereof, we nave made this certificate this 12th day of April, 1906, and we hereto subscribe our respective names and the number of shares of stock which each of us agree to take in said corporation…

On this 13th day of April, 1906, before me the subscriber, personally appeared Paul Smith, Sr„ Phelps Smith, Paul Smith, Jr. and Arthur C. Banker, to me personally known to be the same persons described in and who executed the foregoing instrument, and they severally acknowledged to me that they executed the same,