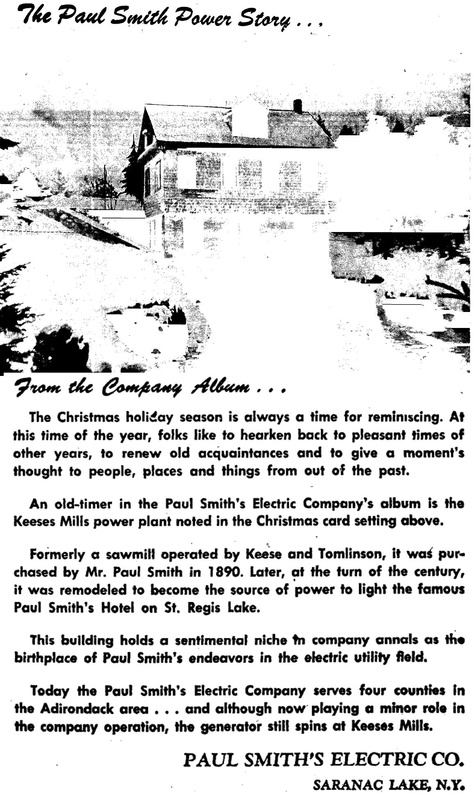 Adirondack Daily Enterprise, Au Sable Forks Record-Post, December 20, 1956 Paul Smith bought the saw mill at Keese Mills from Keese and Tomlinson in 1890. At the turn of the century, he developed it into a hydro-electric plant to light his hotel, the start of what would become Paul Smith's Electric Light and Power and Railroad Company.

John Gibbo, a brother of George Gibbo, of Malone, who for four or five years has been one of Paul Smith's best carpenters, got his hand into a gummer at Paul Smith's mill one day last week: one finger was taken nearly off and several others were badly mutilated. An endeavor is being made to save the hand at the Royal Victoria Hospital, Montreal.

B. S. Martin, who has been employed in Troy and Albany, visited his parents Tuesday. Mr. Martin left here, to install an electric plant at Paul Smith's hotel. The plant will be sufficiently large to run 1,000 incandescent lamps. Twenty arc lights will also be used for lighting the grounds.

The Paul Smith Hotel Company will light their buildings throughout with electricity next season. A fine dam has been erected at Keese’s Mill, about three miles from the hotel with two eight feet tubes to conduct the water to the wheels. Double wheels have been put in connection with one of the tubes, which, will give all the power needed for the big hotel's present needs. The fall is about 18 feet and the dam has been constructed in the most substantial manner of concrete, both front and back, with supporting wings both up and down stream, the space between being filled with tons of gravel. All is in readiness for the dynamo, which will be placed long before the opening of next season's business, and this brilliant watering place will continue to outshine many of its competitors. The plant will cost about $25,000, but cost is not considered in the equipment of this princely summer resort.    —Malone Farmer

Work on the electric light plant at Paul Smith's, in Franklin county, is about completed. The new plant will have a capacity of 3,000 lights. The hotel and cottages will be lighted by incandescent lights-and the grounds by arc lights. All the machinery in and about the hotels will be operated by electric power. The Paul Smith's Hotel Company has just completed a stone dam with an eighteen foot head. In the construction of the dam 1.500 barrels of cement were used. .The plant complete cost $30,000.

The same company has purchased the power at Franklin Falls, which is sufficient to light Paul Smith's, Saranac Lake and all the surrounding country.

At Paul Smith's all the cottages are rented and the bookings for the hotel are the largest ever known at this time of the year. The same is true of all the prominent resorts of the Adirondacks. The outlook favors a record-breaking season.