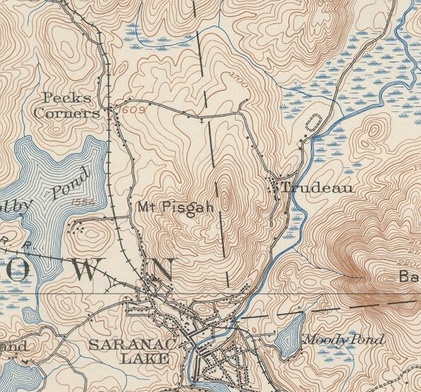 A book in the Adirondack Room of the Saranac Lake Free Library entitled Places and Names of Franklin County, New York has the following information about Peck's Corners. Chester Peck farmed the nearby land in the 1870s and the area consisted of ten homes, a store, a blacksmith shop, a post office, and a saloon.

John Henry Morgan, who lives on a farm near Peck's Corners, was held up by a masked man in the dining room of his own home shortly after 10 o'clock Friday night, and robbed of two dollars in cash, all he had on his person at the time. When Morgan reported the affair to the police he told them he had recognized the voice of the holdup man as being that of a farmhand who had been employed at the place.

But for the fact that he had put several hundred dollars in a Tupper Lake Bank that morning it probably would have been taken from him.

After attending a dance at the State Armory on Friday evening the four started for a ride. When about two and a half miles outside the village their machine skidded while trying to pass another car, went into the ditch and turned over.

State Police are investigating the case as it was outside the village limits.

The Public Service Commission today made public a list of railroad grade crossings, the elimination of which has been suggested for consideration during the year 1932.

…Three are listed for Franklin county: one at Peck's Corners on the Saranac Lake-Lake Clear highway which engineers state would cost approximately $93,000. A crossing is also suggested for East Main street, Malone village, on the Malone-Chateaugay highway at a cost of $83,000. Others are over New York Central tracks on the Gabriels-Bloomingdale road and the Gabriels-Paul Smiths highway.

The Commission announced that a public hearing will be held on this list of crossings at its office in the state office building at Albany, October 27, 1931, at 10 a.m. …

Struggling with a 17-year-old youth, who with a loaded shotgun demanded that he turn over his store's money, Frank Hillman of Pecks Corners near Saranac Lake on last Thursday night managed to discharge the gun and hold the would-be robber until aid came. Charles Yates of Ridgewood is being held for the Franklin county grand jury on a charge of attempted robbery.

Hillman, an elderly man, conducts a service station and store at Pecks Corners. According to justice records, and testimony by Yates and Hillman, the youth entered the store and asked for a drink of water. Hillman went to the rear of the store and as he did so, the youth stepped behind a counter and grabbed a single barrel shotgun from the wall. When Hillman  returned, the youth said, “Hand over your money, all of it." Altho Hillman knew that the gun was loaded, he grappled with the young man, managed to point the muzzle towards the ceiling and with his other hand pulled the trigger, discharging the gun.

Aid came from a nearby residence and the youth was held until Patrolman Edmund Duprey of the Saranac Lake police force arrived.  Duprey turned the case over to state police.

Yates was arraigned last Friday Morning before Justice of the Peace C.J. Stickney of Saranac Lake.  He was taken to Malone Friday afternoon where he will be held in Franklin County jail pending action by the grand jury.

Yates, it is said, hitch hiked to Saranac Lake from Ridgewood, where he resides. He has no police record.

Raymond A. Comstock, 16, son of Mr. and Mrs. Arthur W. Comstock of Saranac Late was fatally injured shortly after 4 p.m. Saturday when his bicycle collided with a dump truck driven by Claude Perry, 18, of Canton. The youth was taken to Saranac Lake general hospital where he died at 5:30 p.m. from a broken back, skull and internal injuries. Transfusions given by Dr. E. M. Jameson were futile.

Saranac police are holding Perry on charges of driving without a license and for driving with faulty brakes.

According to Patrolman Everett Garwood, the youth was struck as he turned from Broadway into the siding of the New York Central railroad at Pecks corners.

Perry told police he did not see the youth riding his bicycle. He asserted the victim ran into the truck.

The youth was picked from the roadside by William J. Young of Malvern, L, I. Young drove to Broadway and Olive street where he picked up Patrolman Garwood and the two took the youth to the hospital.

The youth was a student in Saranac Lake high school. He is survived by his parents, five sisters and two brothers.

The truck is owned by Mannay Perry of Canton who police say was contracting to haul stone for a construction company.

1.8 Miles in Franklin To Be Reconstructed

A low bid of $252,609.50 from M.K. Engineering Co., Inc., of Albany, was received at Albany lately by B.D. Tallamy, New York State Superintendent of Public Works, for construction with asphalt concrete on 1.8 miles of Route 86 northward out of Saranac Lake toward Harrietstown. State engineers had estimated cost of this work at $281,000. [Work] will begin in the village of Saranac Lake just north of the intersection of Ampersand Avenue and Broadway and proceed northerly on Broadway for about 1,000 feet before cutting off to the west of existing Route 86. Proceeding on new location generally northwesterly along the east shore of Colby Pond, the route will rejoin existing Route 86 about 1,900 feet north of Pecks Corners, where the project will terminate.

[This section of the route was built on an abandoned railroad bed.]