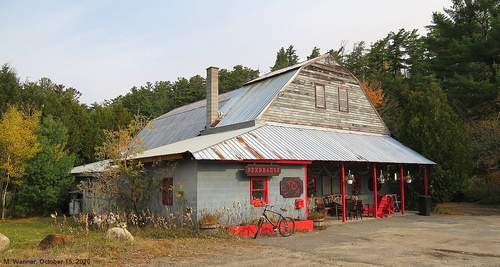 Pendragon Theatre Pendragon production history. Pendragon Theatre moved to 150 River Street, the location of a former dairy, in 1986, and remodeled and improved the property as a theatre over the next thirty years.  In 2019, they announced plan to move to the former Newman and Holmes building at 66 Church Street.

SARANAC LAKE — The Pendragon theater company is in the final stages of negotiating to buy a new home at 148 River St.

The new building will replace the 68 Main St. Theater as the six-year-old company's home. The building that housed the theater has been sold.

Pendragon founders Susan Neal and Bob Pettee said in a recent interview that the new building has lots of potential for improving arts in the community.

“We want to extend the space to all sorts of people,” Neal said. ''We hope the community feels it's theirs.”

Neal said NCCC President David Petty has indicated the college is interested in using the facility. They said the theater may allow NCCC to expand its drama program.

The building will house the Java Jive Coffee House and is suitable for other small shows, such as classical music concerts sponsored by the Essex-Franklin Lyceum, according to Neal. Art exhibits by local artists will be exhibited in the theater lobby area. Pendragon will conduct acting and directing workshops in it.

Seating capacity will increase nearly a third from some 65 seats in the 68 Main St. Theater to accommodate Pendragon's growing audience. It grew from 2,400 viewers in 1984 to 3,800 people last year, according to Pettee.

Pendragon's annual operating budget will nearly double after the move from about $15,000 to $25,000 to $30,000. The not-for-profit corporation will file for tax-exempt status.

Pendragon will launch its first major fund drive in May to finance the venture. Pettee said it hopes to raise $40,000 to finance the purchase and renovations. The building's sale price is $20,000. An anonymous patron has given Pendragon a long-term, no-interest loan to cover initial expenditures, Pettee said.

The fund drive will kick off April 26 at 8 pm with a benefit concert by the Harpur Jazz Ensemble at the Lake Placid Center for the Arts. The concert also will benefit the newly established Lake Placid Summer Music Theater.

In May, Pendragon will seek contributions in letters to people on its mailing list. The company will also seek grants. It will raise prices for the summer season from $5 and $4 to $7 and $5 and may Schedule more performances.

Pendragon plans to enlist the aid of volunteers this spring to help move its lighting and sound equipment, props and costumes to its new home.

Neal said Pendragon, which started seeking a building last summer, was led to the site by Peter Lesser, who runs the Java Jive Coffee House. They've been negotiating terms with Dr. Lopez since December.

The company plans to open its summer season in mid-June at its new location. The barn-like building will be revamped to accommodate the theater. There are plans for a box office, attic storage space, lobby and coat room in addition to the theater.

The 30-foot by 40-foot theater space with its 12.5-foot ceiling will allow Pendragon to improve the technical end of its productions, according to Pettee. The new theater also will be more comfortable for audiences. It will include more comfortable chairs and a lobby in which to stand during intermission. The company may sell refreshments.

The increased storage space also will allow the fast growing company to catalogue and properly store the costumes and props it has accumulated over the years. Now, they are piled up in a room adjacent to Neal and Pettee's apartment at 68 Main St., which served as the former theater's “green room.” The married couple said they will continue to live there.

The move to a theater of its own is a big step toward Pendragon's long-term goal of establishing itself as a regional theater. The company, comprised of a handful of professional actors and numerous community players, will continue to travel for occasional performances in Old Forge and Blue Mountain Lake and perhaps Malone.

Neal and Pettee hope to travel to the Dublin Festival to perform in Lake Placid playwright Jack Kendrick's drama “First Class Carriage.” The play won an award on the “fringe” at the 1983 Edinborough Festival. Pendragon also dreams of participating again in that event in 1987. Another long-term goal is to stage a Pendragon production in New York City.

This summer's repertory season will include “What the Butler Saw” by Joe Orton, “Getting Out” by Marsha Norman and “Ring Round the Moon”. Two professional actors from Boston, including a drama instructor at Boston University, will join the company this slimmer.

Neal said Pendragon members are largely unpaid for their work. Summer repertory members earn a small salary; the highest salary last year was $925 over four months for a person who served as a director, actor and backstage worker.

Pendragon also mounts productions in the fall, winter and spring.