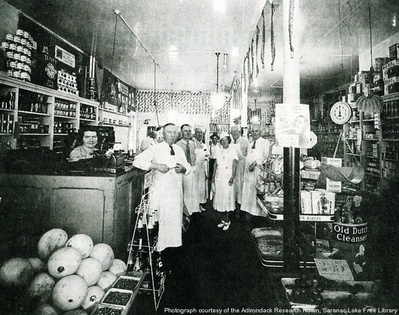 Mullen's Cash Store, c. 1930. Lucele Hatch is behind the counter; the gentleman in the foreground may be Percy Mullen Adirondack Daily Enterprise, August 20, 2011 Born: July 4, 1886

Percy S. Mullen, proprietor for many years of the Mullen's Cash Grocery Store on Bloomingdale Avenue, in Saranac Lake, died at 3 a. m. Sunday at a Malone Nursing Home. He was 82 years of age and had lived in Saranac Lake for 81 years.

Survivors are a daughter, Mrs. Ruth James of Saranac Lake; a son, Edward, of Liverpool; a grandson, Lance Corp. Hugh J. Mullen with the Marines at Danang, Vietnam; four other grandchildren; and several nieces and nephews.

Friends may call at the Fortune Funeral Home where the funeral will be held at 2 p. m. Wednesday. The Rev. William G. Vigne, pastor of he Adirondack Community Church, will officiate at the funeral. Interment will be in Harrietstown Cemetery.