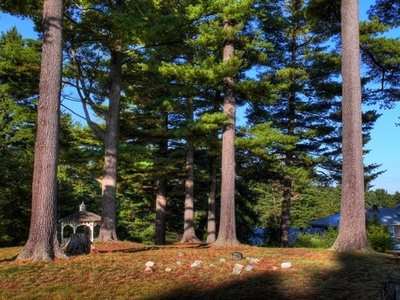 Pest House Pine Grove Among cultures around the world, groves have been places of sanctuary and worship since time immemorial.

This is the Pest House Pine Grove, situated at the highest point of college hill and the North Country Community College Saranac Lake campus. In the foreground are the stones of a medicine wheel that had become disarranged over time, but the wheel was restored October 31, 2009. It was put here in the year 2000 by Ellen Creighton and her Native American Culture students. At right background is Hodson Hall, which was originally the General Hospital of Saranac Lake.

The trees are tall and stately White Pines. They look like they’ve been here forever, but they were planted in 1914 to shelter a small brown bungalow called the “Isolation Cottage” by the hospital staff but colloquially known as the “Pest House” (as in pestilence), which took its first patients that same year. The purpose of the pest house was to isolate highly contagious patients from the general hospital population, yet provide them with a healing environment that was more like a home than an institution. The cottage could house four people, and it had a front porch that faced south toward a grand vista of Scarface Mountain and the Sawtooth Range. When the hospital moved to its current location in 1967 and the college acquired the property, the Pest House was abandoned. By 1985, though there were ideas for using it, the college could not afford the repairs the house required; and it was torn down.

Some sites acquire their power as much through what people experienced there as by the inherent nature of the place. Anyone standing in this grove, surrounded by the college campus and its activities, may feel a certain suspension of the stressors that are dominant just a few yards away. The space within the grove imparts a sense of serenity which is itself a special kind of power.

What sort of residual spiritual energy was left in this place by people regaining their health and hope here over a period of decades? Was it the essence of gratitude? Of relief? Of peace?

The Isolation Cottage was built and made ready for use in 1914. This has been made possible by a gift of $2,500 by Mrs. Robert W. Bliss. It accommodated four patients. The Cottage was opened for a month in the summer of 1915 for diphtheria patients. The Cottage was unfurnished but thanks to the Ladies Auxiliary and other friends sufficient furniture was obtained to make the rooms tolerably comfortable for patients and nurses. There still was a need for painting the Cottage inside and outside and to complete furnishing with aseptic furniture, also screens for windows, doors, and porch. Marie A. Haase  provided cedar logs for steps and grading of the ground. The Village Improvement Society furnished some seedling pines and cedars which were planted on the ground.