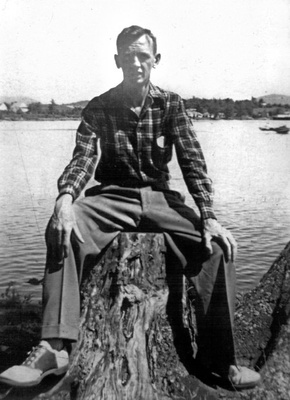 Peter Troy and his two brothers, Thomas Troy and Denis Troy came from New York City for the cure at the Ray Brook Sanatorium in the early 1930s. Peter returned to Saranac Lake often and bought a home at 3 Maple Hill in 1958. He retired here in 1973 from the Bronx. He became very active in the Saranac Lake Lions Club. Pete also knew Christy Mathewson and Larry Doyle.

He was born April 2, 1911, in Greenwich Village, New York City the son of Denis and Mary (Cusack)Troy.

He came to Saranac Lake in 1935 to cure for tuberculosis and returned every summer until he moved here in 1974, following his retirement.

He was married June 29, 1946, to Catherine E. Delaney, who survives and who now lives here.

He worked as an estimator for Thomas F. Collins Plate Glass Co. in New York City for 35 years. He was a member of St. Bernard's Church and the Lions Club here. He was a past vice-president of the Saranac Lake Lions Club. He was also a past president of the Greenwich Village Lions Club and was voted Lion of the Year in 1975 and 1976 by that club. He was a member of the St. Bernard's Finance Committee and was involved with and supported many other community activities.

He is survived by three sons, Denis of Pearl River, Peter Jr. of South Chatham, Mass. and Richard; of Jackson Hole, Wyo. and seven grandchildren.

He is also survived by one brother, Thomas of Westchester, Pa. and one sister, Mrs. James (Catherine) Gallagher of Merrick, Long Island.

Arrangements are in care of the Keough and Son Funeral Home of Saranac Lake.

Calling hours have been tentatively set for Friday afternoon and evening at the funeral home.

A Mass of Christian Burial is tentatively scheduled at St. Bernard's' Church here, with burial in St. Bernard's Cemetery.

Information provided by Peter's son in 2012.