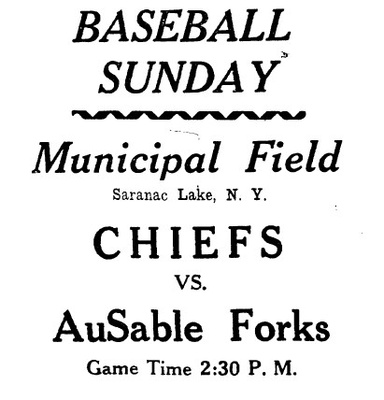 Adirondack Daily Enterprise, Jun 13, 1953 Petrova Field, a portion of which is known as Ken Wilson Field is the 15-acre athletic field behind Petrova School, off of Petrova Avenue.  In 1930-31, it was known as Trudeau Memorial Field, and later was known as Municipal field. It was renamed Ken Wilson Field in 1987.   Until the 1980s it was owned by the village.

Before the school was built it was known as Jenkins Field as it was originally the site of the Jenkins Farm; Walter Jenkins raised cabbages on the land that would become the ball fields. In the 1930s, '40s and '50s, Saranac Lake's semi-pro baseball teams, the Saranac Lake Red Sox and the Saranac Lake Chiefs played their games there.

The Circus on what would become Petrova field

Between 1949 and 1951, the field was used by the New York Football Giants as their training quarters. From 1946-1948 the field was rented to the Philadelphia Eagles football team for pre-season training. 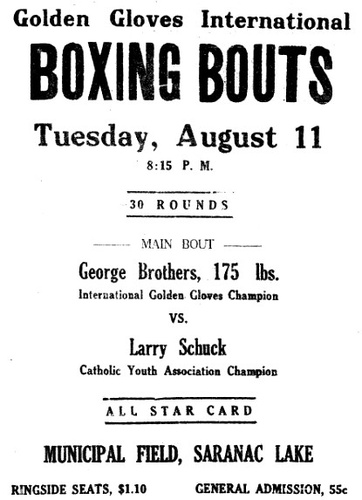 Lake Placid News, August 7, 1936
Until the 1980 Winter Olympics the fields would be flooded in the winter to form the Petrova Rink for skating.

Beginning in the late 1940s the Petrova Field was the home to many local softball teams beginning with fast pitch softball in 1948. In 1973, slow pitch softball started, and eventually became known as the Blackfly Softball League.  The Ladies softball league has also used this field for several decades starting in the 1970s.

It was also used by the circus.

Development of Trudeau Memorial field as a recreational center by the combined efforts of the Saranac Lake village and school district now looms as the plan most likely to be adopted as the result of the survey being conducted by the village board of trustees.

Although the proposed purchase of the Ampersand Bay property of Lower Saranac Lake for a sport center was defeated at a referendum of taxpayers a week ago, there was sufficient votes in favor of the project to indicate a recreational field of some kind is favored by the people. The village fathers, therefore, formed a committee to make a further study of the situation.

The board of education is to be consulted regarding a united effort of the village and school district for development of Trudeau field, which is owned by the school district. As development of this site could include almost every popular sport at less cost than other sites proposed, it seems probable the boards will come to some kind of an agreement.

Col. Kenneth Gardner, member of the school board, proposed development of Trudeau field when an active movement for a sport center was started about a year ago, and it is believed he and other trustees of the board of education will favor cooperation of the village at this time. The field was purchased recently by the school district at a cost of slightly more than $13,000 for seven acres.

Trudeau Memorial field is the only athletic ground in the village of Saranac Lake and has been the scene of high school football and baseball games for a number of years. In addition, to these sports, it has been pointed out that the field provides ample room for a track, skating rink, hockey pen. toboggan slide, tennis courts and other facilities.

The school authorities are Interested in providing recreational and sport facilities for youngsters and high school children, and feel that a properly supervised field will afford adults as much pleasure as children without either interfering with the other. It has been pointed out that children and adults use the same skating rink at Lake Placid Club.

It is felt that the proximity of the school to the field would stimulate interest among the children in various Sports. It also has been suggested that an expert skater, possibly Ed. Lamey of that village, former international champion, might be engaged as an instructor.

The old Pines Club and Ampersand Bay also are to be given further consideration as a sport site for the coming winter, but as Trudeau field permanently is in possession of the school board, it is probable it will be selected as the site for further development.

SKATING RACES TO BE HELD AT SARANAC LAKE

North American Championship Events to be Held in Resort Village

The North American championship speed skating races were given to Saranac Lake village Saturday at a meeting of the Amateur Skating Union of the United States in Cleveland.

The decision is subject to approval by the Canadian union which is expected to ratify the award at its next meeting.

Word of the award was received Sunday afternoon by Charles Goldsmith, a member of the skating committee of the Saranac Lake Athletic association under whose auspices the races will be conducted.

The races will be run off at the municipal field February 12 thru 14.

Sananac Lake will be host to the skaters this winter for the first time since 1931. The races had been staged there on several occasions prior to that time.

There will be over five hundred dogs entered in the show and it is considered one of the most important events of the its kind ever conducted in this area.

No Injuns Here But, Heap Big Rodeo Due

Maps of 1779 placed the present location of Saranac Lake in "Indian Country."

Now, the nearest Indian reservation is at Hogansburg, some 60 miles away, but nevertheless, the residents of Saranac Lake and the surrounding communities are looking forward to a genuine Wild West Rodeo which will take place at Saranac Lake's Municipal Field.

LIGHTS ARE OUT FOR S.L. FIELD

The lights are out insofar as Saranac Lake's Municipal Field is concerned. At least for the time being.

There was an item of $8,000 for them in the bond resolution adopted last night by the Village Board. Since the item was inserted, the Trustees were informed that an efficient lighting system would cost approximately $18,000.

The matter was discussed for twelve minutes after Village Attorney Joseph Stephen asked for a vote. This was followed by a 23-minute discussion about a new National Guard Armory for Saranac Lake. The Trustees then spent four minutes studying a new Chamber of Commerce folder. Trustee Edward Worthington, in answer to a question, then informed the Board that Robert Liddy had attended a wild-life association meeting in Washington.

The Trustees then came back to the matter of the $8,000 for a lighting system. They voted it down.

The bond issue as approved by the Trustees, subject to a vote of the taxpayers June 30, provides for:

By resolutions of the Board the following expenditures were approved — not subject to referendum: