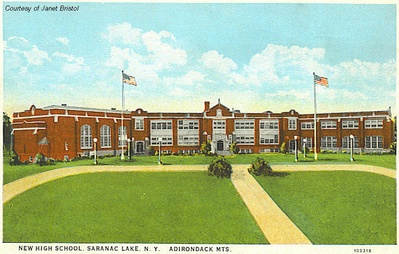 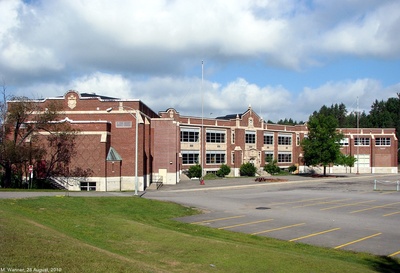 Petrova Elementary and the Middle School, 2010 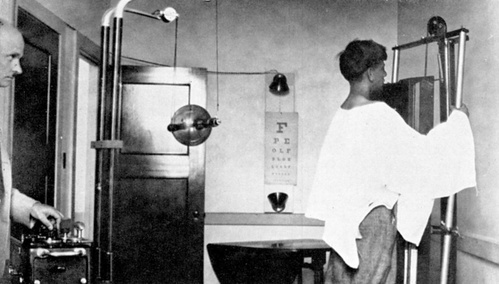 1933 Canaras: "X-ray equipment is yearly brought to the high school from the Trudeau Foundation by a specialist who, with the assistance of Miss Caroline O'Brien, the health teacher, X-rays the lungs of all the students." 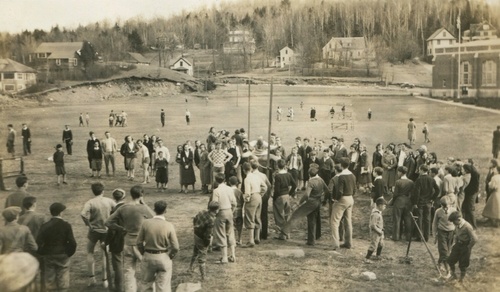 Track meet at Petrova, 1930s (Note high jumper, mid-jump, center). This field is where the present faculty parking and bus circle is located, before the LaPan Highway was built. (Courtesy of Priscilla Christine Mackay Goss) 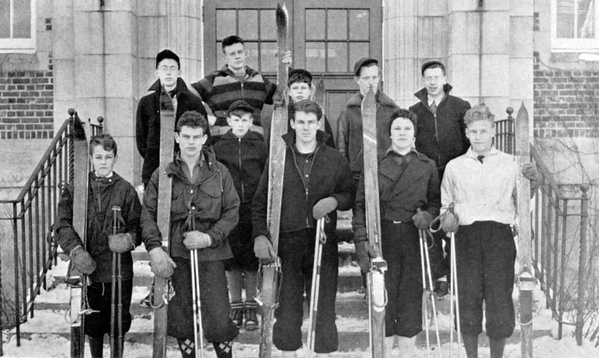 1939 Canaras: The uncoached and unprepared ski-team of 1935-36 accepted Northwood's challenge to a meet. They didn't come home with garlands on their shoulders, nor crowns on their heads, but they did come back with the resolution to organize, and to bring fame to themselves not only as individuals, but as an organization that our school could be proud of. This year their dreams came true and after hectic weeks of waiting for good skiing weather, on February 27, 1937, the ski-team, consisting of such able veterans as Dave "Tarzan" Blanchet, Ben "Shoulders" Downs, "Bill" Cantwell, Howard Thompson, and "Bill" Distin, traveled to their arch-enemies' skiing grounds and came home—victorious. — The different events have claimed their own heroes from among the team. The most outstanding were Dave for his capture of the Slalom event; Benny for his victorious flight to fame from the Placid Jump; and Cantwell for his undaunted speed down the Mt. Whitney Run. Thompson and Distin, although they claimed no first places, raised the team's standard by attaining many seconds and thirds. — As only three members are being lost by graduation, next year's team should be a fine one, for around a nucleus of the veteran skiers that remain, may be built a really first class team. Address: 141 Petrova Avenue

From an undated, unidentified news clipping, probably the Enterprise, from a scrapbook kept by John G. Coogan during his school years.

CONTRACTS ARE GIVEN TEACHERS IN THE SCHOOL

Few Changes in Prospect For Next Year in Instruction Staff Here; Changes Are Made in Duties Outlined

Teachers in the Saranac Lake public schools this week have had under consideration their contracts for the school year of 1931-32 following action of the board of education recently on recommendations of the superintendent, H. V. Littell.

Signed contracts are to be returned to the board on or before April 2, at which time will be determined how extensive the changes in the school organization are to be.

One resignation, that of Miss Alice Ferriss as mathematics teacher in the high school, was received before the special meeting last Friday night at which the board took action on the recommendations.

The question of continuing to maintain a special librarian has also been raised, and this matter was placed on the table for further consideration.

Salaries provided in the new contracts include increases called for by state laws except in the cases of teachers whose salaries have reached maximum figures.

Following are those to whom contracts were offered and the salaries provided: 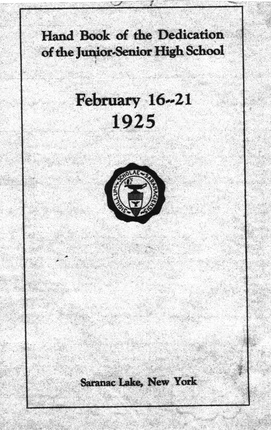 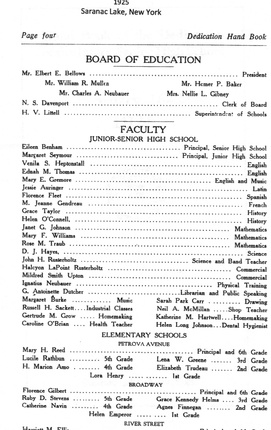 Through error the salary of Willard Greene, teacher of instrumental music at Saranac Lake High school was given as $2200 instead of $2700 on the list of contracts published yesterday offered teachers in the local schools for the next school year.

The name of H. V. Littell, superintendent, was omitted from the list. The school board voted his reinstatement at a salary of $5,200 per year, representing an increase of $200.

It was also announced at the school office today that at the last regular board meeting held Monday night Stanley J. Appleyard, chairman of the board, and Col. Kenneth Gardner, trustee, were made a budget committee to prepare the financial plans for the school year 1931-32.

An invitation was sent the board of trustees of the Ray Brook school district to meet with the Saranac Lake board next week Thursday discuss the question of tuition to be charged pupils attending the school here from that district.

Mr. Greene was given permission to attend a conference of instrumental music teachers held in Utica the last three days of this week.

From an unidentified news clipping, probably the Enterprise, from a scrapbook kept by John G. Coogan during his school years.

Saranac Lake as a community acknowledged the honor that has been brought to this village by the Saranac Lake high school football team, which this past season brought home the championship of the Adirondack Interscholastic league for the sixth successive year, when 160 representative citizens gathered at a banquet Saturday night at the Hotel Saranac given by the board of education.

Tribute to the team's prowess was paid by several speakers who lauded the players for their sportsmanship, clean playing, courage, harmonious and cooperative spirit. At the same time while praises of the boys who made up the 1930 team were being sung, one of the prominent players of the football team of the three preceding years who passed to the great beyond only a few days ago was not forgotten. The [??]er was Harris H. Ryan of Lake Clear, who died of accidental suffocation in an automobile accident on New Year's Eve.

Col. Kenneth Gardner, member of the board of education, spoke feelingly of Ryan's character and his ability in all school and other activities.

Colonel Gardner told the football team assembled before him that while victory in contests is important, the playing of a clean game was of far greater importance and should be the first thought of all in their minds.

Kenneth Wilson, coach of the six title winning teams, said he was proud of his players and was immensely pleased with the willing spirit of cooperation and harmony they showed throughout the season. He mentioned the fact that Saranac Lake high only had three veterans left from the 1929 team and how of the players who came out for the team this fall never had been in a football game before, and were willing to work and fight hard to win a place on the eleven and help their school.

The coach also expressed his thanks and appreciation to the Student's association of the high school and the board of education for their effort in supplying the football team with splendid equipment, and to the townspeople for the support given all school athletics.

Dr. J. C. Russell, president of the local board of education a number of years ago, also spoke briefly and told the diners how he and his fellow members of the board in 1907 felt the need of a proper field for athletic contests and how the board in office at that time had been instrumental in getting the site where the high school now stands.

Dr. Edward N. Packard, president of the school board, acted as toastmaster and introduced the speakers. The dinner was featured by the singing of three popular songs by Joseph Asselta, tenor. He sang "Dream," "Wasn't It Nice?" and "Sa-lu-ta" accompanied at the piano by Mrs. T. J. Meury.

The high school orchestra played throughout the dinner, much to the enjoyment of the crowd, and for the dancing which followed. The military airs and other peppy numbers by the orchestra were well done, and the music also came in for some compliments at the hands of the toastmaster and the speakers. Willard Green led the musicians.

At the conclusion of the speaking the roll of the 1930 championship football team was called and as each of the 14 players who had won their letters in this sport heard his name, he stood up to receive from Colonel Gardner a miniature gold football with his name engraved upon it along with an appropriate message. This was a gift from the board of education.

The three managers of the football team, Emil Matthews, Irving Edelberg and Leonard Berwick, were also praised for their excellent work this year, and Colonel Gardner stated that the board felt they had also done their job so well that they ought to be given miniature gold footballs along with the players.

The six-room addition to the Saranac Lake high school was approved last week by the PWA and announced ready for occupancy. The addition was built under the direction of Moore Parland and Reinhardt, PWA engineers and with the contractors, L. F. Murtagh, Carson Brothers and William C. Shackett. A final inspection of the building was made by the engineers, contractors and Clerk Walter Noble of the board of education. The building will house the fresh air school which was formerly in River street in a small frame building. The annex is three stories high and encloses six rooms. The school district's share of the cost was $23,000 while the PWA granted $18,000 for the project. 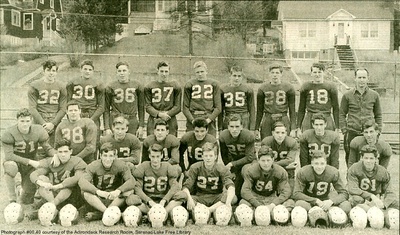 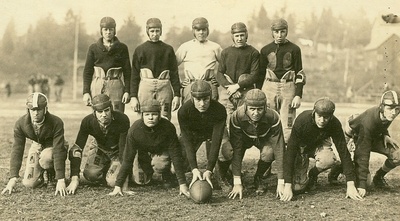 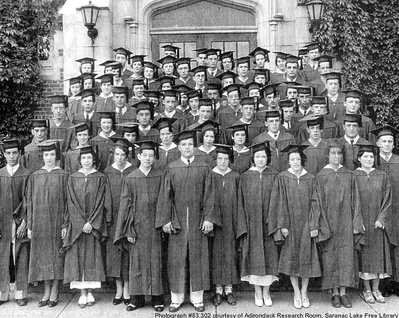 Those pictured in the Enterprise on October 7, 2013, attending their 50th class reunion were:

Red and White, the school paper