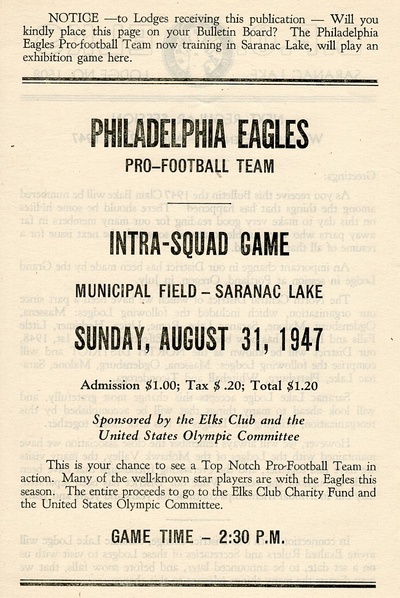 The Philadelphia Eagles were inducted into the Saranac Lake Village Walk of fame in 2017. Their plaque hangs on the Thompson Building on Broadway.

The building formerly known as the Thompson Building was constructed by the Dupree Brothers of Saranac Lake in the 1940s at the request of Alexis (Lex) Thompson, the owner of the Eagles. The Eagles were in Saranac Lake and held their training camp on the Petrova Field for three years from 1946-1948. The Eagles won the National Football League Championship in back to back years in 1948 and 1949.

Residents of the North Country will have, an opportunity to witness a big league football team in action on Sunday, August 25, when the Philadelphia Eagles, who have been training at Saranac Lake since August 6 for the 1946 National Football League campaign, will hold their first intra-squad game.

The 57 gridders now on the Eagles' roster, will be divided into two squads—the Reds and the Whites— for the contest, which will be staged with all the trappings of big-time football.

Many of the great stars of professional football will be on view that afternoon, including the redoubtable Steve Van Buren, the National Football League's leading ball carrier and scorer; Al Wistert, All-America tackle from the University of Michigan, and twice named to All-League pro teams; Vic Sears, another All-League tackle; Augie Lio, former Georgetown grid star, and now regarded as one of the game's great place-kickers; and Joe Muha, triple-threat fullback from Virginia Military Institute.

Calling the signals for the opposing teams will be Roy Zimmerman, the Eagles' great passer and kicker, who has converted for extra points 87 times out of 95 tries in the last three years; Tossin' Tommy Thompson, who finished third in league standings as a passer in 1941 and 1942 before joining the U. S. Army; Al “Lefty” Sherman, southpaw tosser from Brooklyn College; and Warren Harris, who comes up for his first chance at the big time with a college record of 17 touchdown passes in a season.

The game, which will be played at High School Field in Saranac Lake, is for the benefit of the Elks Charity Fund, and is being sponsored by the B.P.O.E. 1508. The kickoff is scheduled for 3:00 pm.

Saranac Lake -- A large squad of husky football gladiators, trotted down Lake street hill Monday morning to the field for their first workout of the season.

The big fellows ranging from 190 to 271 pounds. will wear the uniform of the Philadelphia Eagles professional football team owned by Alexis Thompson, during the 1947 season.

Coach Greasy Neale stated that he had one of the best teams this year he has had since he took over the coaching berth of the Eagles seven years ago.

His prediction for the coming season is that the Eagles should go places."barring accidents.”

The players will be put through the summer training period on the Saranac Lake Municipal athletic Field.

Forsaking a day of practice at their “Eagles' Nest” headquarters in Saranac Lake, the Philadelphia Eagles of the National Professional Football League came to Sunmount yesterday afternoon to put on an exhibition for the hospitalized war veterans.

More than 300 fans turned out to watch the Eagles, divided into two squads, run through their paces, and scores of patients watched from their rooms. Among those who took part the the exhibition drill were Steve Van Buren, league-leading pro scorer in 1945; Pete Pihos, Indiana's All-American of last season; Armstrong of the Oklahoma Aggies, also an All-American last year; McHugh, who starred for Georgia Tech in the Sun Bowl last season, and Alex Wojie, Fordham All-American.

This football was signed by members of the 1947 Philadelphia Eagles and given to Carrie Stott, a Saranac Lake resident and their cook at the Eagles Nest on Lake Street. Carrie Stott passed this football onto her daughter and son-in-law Carol and Dick Gladd, who in turn passed the football onto their daughter and son-in-law Tina and John Clark. Many decades later 26 of the approximate 30 signatures are still legible. For 70 years this football has been well cared for by the Stott, Gladd, and Clark families. 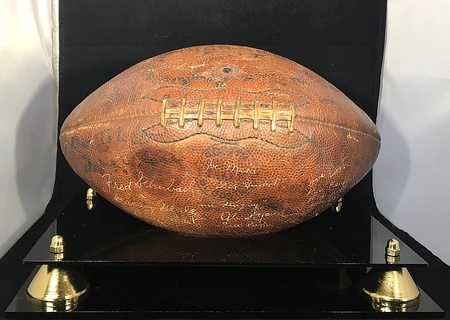