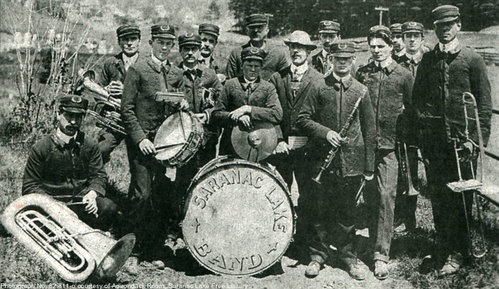 Phillip L. Steneri is at far left in the second row. Probably on Decoration Day c. 1910, the men of the Saranac Lake Band posed at Pine Ridge Cemetery, in uniform jackets decorated with braid, for a photo by Kollecker & Co. In 1980, George Ford Towner identified his father and some other members of the band. Seated at left: Nelson Trombley (bass tuba). First row, from left: Roy Lobdell (snare drum); Earl Lobdell (bass drum); 2 others unknown. Second row (L to R): Phil Steneri (baritone), 4 others unknown. Third row (L to R): Archie Nimmo (leader and No. 1 cornet). Pop Duso (cornet), H. Ford Towner (trombone), one other unknown. In 1970 Towner also wrote that several of these men from the Saranac Lake Business Men's Band, which he said had been in existence for many years, taught members of the Saranac Lake Boys Band. Nimmo taught the trumpets, Towner the trombones, the Lobdell brothers the drums, and Mr. Trombley the basses. Adirondack Daily Enterprise, May 28, 2011 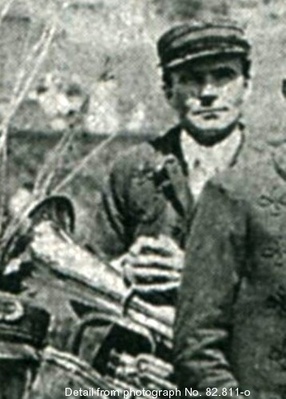 Phillip L. Steneri was a carpenter and glazer at Branch and Callanan and a master carpenter who lived on Dorsey Street.

He was also the music director of the High School, and a music teacher who directed the Saranac Lake Boys' Band and the Mandolin Club.

Mr. Steneri was born Sept. 26, 1882, in New York City, a son of Louis and Louisa Steneri. He was educated in New York City schools. As a young man, Mr. Steneri moved to Saranac Lake where he was associated for thirty years with Branch & Callanan Co., lumber and contracting concern, as head glazer.

While in Saranac Lake, he taught music and instruments, and conducted community bands and orchestras. On Feb. 11, 1907, he married Minnie Lesperance in St. Bernard's Church, Saranac Lake. She died Nov. 2, 1923. In 1934, he moved to Albany, where tie continued his music work. Mr. Steneri came to Utica in 1952 and had resided here since. He was a parishioner of Our Lady of Lourdes Church.