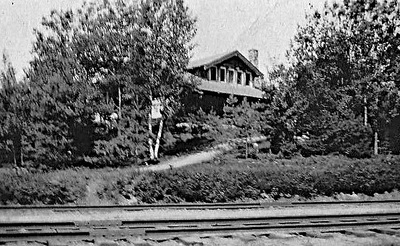 Richard J. Donovan, of New York, visited his tree plantation at Pine Park on Rainbow Lake last week to inspect the work on his new camp and connecting buildings now in process of erection there. Mr. Donovan is the most extensive individual reforester in the United States, having set out 630,000 trees on his tract. There are seven lakes in his park, together with the North Branch of the Saranac River and [Negro Brook], all good trout waters. The main camp is of the Swiss Chalet type and faces Lily Pad Lake. It also commands views of Rainbow and Pine lakes. The exterior of the camp is of cobblestones and the interior of logs. It is already enclosed and the heating plant installed so that interior finishing can go forward in any kind of weather. The garage, stables, ice house and cooler are ail completed. The water supply is a fine spring about 400 feet from the camp.

AIR MAIL WAS IN ITS INFANCY back in 1922. '"Lewis M. Cameron of Moody, superintendent of Pine Park Camp at Onchiota, writes that John M. Larsen, the famous air mail man, and his family are at camp for the season. Mr. Larsen is the maker of the all-metal airplanes which have just begun to carry mail from Central Park, L.I., near New York City, to San Francisco, under direction of the U.S. Postoffice Dept. Mr. Larsen himself is one of the passengers in three airplanes which started off on July 29th for the Pacific coast." A plane trip to the west coast still took four or five days back in 1922.