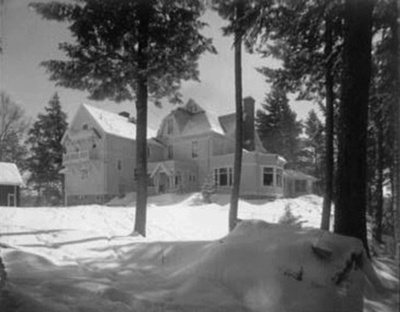 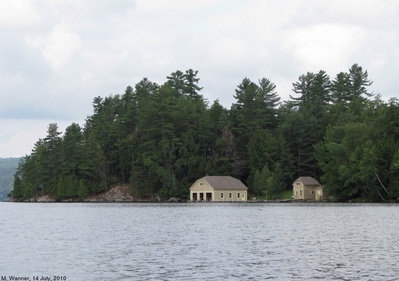 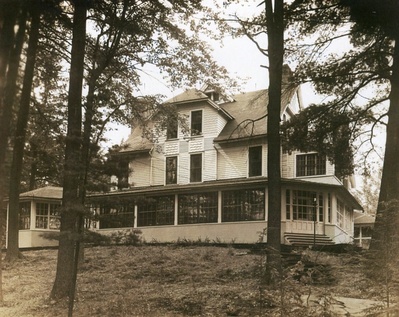 Historic Saranac Lake collection. Pinehurst on Lower Saranac Lake, was probably started in 1885 under the ownership of the Ehrich family, founders of Ehrich Brothers department store in New York City. William J. Ehrich bought the property from the Mutual Life Insurance Company of New York. Ehrich was only 45 when he died suddenly of a heart attack in his stable on the property, in 1889. 1

During the winter of 1887-88, Robert Louis Stevenson enjoyed the hospitality of William's brother Louis Ehrich and his wife Ida Morganthau Ehrich at their comfortable, steam-heated house about two miles from the village. On June 6, 1890, the Plattsburgh Sentinel reported that "Mrs. Lemburger [sic: Limburg or Limburger] of New York, has rented the Ehrich cottage and will bring with her a party of twelve or fifteen."

In May of 1907 William H. Haase purchased the Ehrich camp. Upon taking possession, he and his wife, Marie Saussenthaler Haase, began a rebuilding project which eventually transformed the property into the beautiful buildings and lovely grounds that became "Pinehurst." In November of 1908 a son was born to the couple at Pinehurst; he was to be their only child. Named Peter, he later became well-known in the area as an ardent sportsman sharing his hunting and fishing trips to his Canadian camp with many local friends.

Pinehurst was operated as a hotel and restaurant from 1942 until at least 1953.

The Priscilla Club enjoyed a delightful outing at Saranac Lake on Friday in response to an invitation from Mr. and Mrs. James White, Jr., of that town. On arriving at the station they were met by Messrs. James and Will White with carriages and conveyed to their cottage at Pinehurst, the magnificent Adirondack home of W. H. Haase, a St. Louis millionaire and of which Mr. White is manager, where a cordial welcome awaited them and a banquet was shortly served. The table decorations were exquisitely beautiful and flowers bloomed everywhere. After ample justice was done to the delicious viands the various points of interest claimed attention followed by a boat ride over the waters blue. While near Knollwood Club the cry "an airship, an airship" flew from lip to lip and sure enough something very like one was seen hovering in the distance over the city of healing and momentary excitement ensued. The return to shore was followed by such a supper that airships were forgotten in the present delights. A visit to the theatre and a drive about the town formed a perfect ending of a perfect day. The club takes this opportunity of expressing their appreciation of the hospitality enjoyed at the hands of their hosts and hostess on this the red-letter day in its history.

An aerial view of Pinehurst from the southSeveral members of the Saranac Lake Fish and Game Club have received settings of pheasant eggs from the State Game Farm at Shelburne, and the eggs have been given over to setting hens. The setting takes place at camps where the newly hatched pheasants will readily find cover in the adjacent woods. The pheasants liberated in the neighborhood of Pinehurst, the estate of Mrs. W. H. Haase on Lower Saranac Lake, have flourished, and are frequently seen dusting themselves in the roadways and sand cover thereabout. Automobiles sometimes have to stop and let the birds finish their dusting operations before they will leave the road and let the car continue its journey.

Ernest Upton, said to be employed as a tutor for Peter Haase, son of Mrs. W. H. Haase, owner of Pinehurst Camp, at Saranac Lake, was accidentally shot in the foot and was rushed to the General Hospital for an operation. 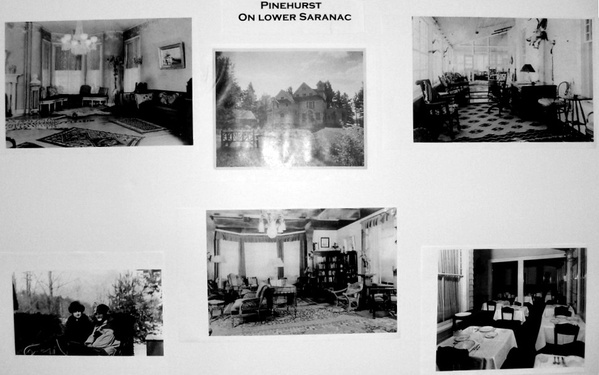 Pinehurst Display by Terry and Lynn Birdsong, Shown at History Day 2008. Click on the image to enlarge the display

Miss Norma Goff has accepted position at Pinehurst, Saranac Lake, for the winter. 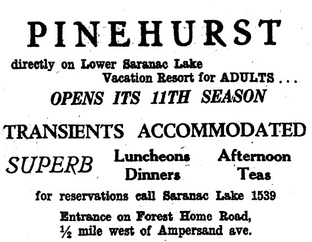