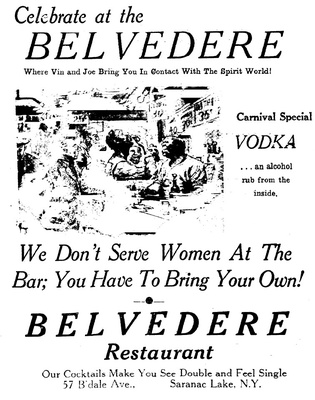 Pioneer Lodge was first mentioned in area newspapers in 1892.   Although it burned "to the ground" in 1893, it was rebuilt starting the same year.  Its final mention is in 1912.

It seems to have served as a sanatorium under different owners between 1928 and 1932.

It first appears in the village telephone directory in 1936.

Friday the boarding cottage at Saranac Lake known as "Pioneer Lodge," was totally destroyed by fire. It was owned by M. C. & J. P. Meagher, and was insured with O'Neil & Hale for $7,000, including furnishings, most of which were saved. The fire caught in the kitchen annex near the chimney, and although great efforts were made to save the building they were unsuccessful. It was a handsome two-story wooden building.

—The Pioneer Lodge, burned in November, is being replaced by a new one on higher ground than the old site, and therefore a preferable situation. The new building is already well along, and the work is progressing- finely.

A Saranac Lake correspondent says "While holding a horse attached to a cutter in front of the Pioneer Lodge, on Saturday afternoon of last week, Patrick O'Neil, a contractor formerly of Mineville, N. Y. was painfully injured. The animal, which belonged to M. C. Meagher became frightened at a passing locomotive, jumped and pitched Mr. O'Neil against a hydrant, breaking his left limb in two places. He was carried to the Lodge where Dr. Wicker was summoned and attended to his injuries. The horse was badly cut up and injured internally. It was not necessary to kill it however."

Big tips at the bell

Delivering [newspapers] to the Belvedere restaurant was always special. We were allowed to carry an extra paper and some guy at the bar would usually buy it and give you a big tip. Mr. Cavallo, Joe's father and Jerry's grandfather, used to sit at a table in the right hand window with Steve Carpenter playing cards. They could watch the passing parade on Bloomingdale Avenue which was a very busy place.

The McGoverns and the Nesbitts lived next door, then the Hushion sisters, the Duffys, the Sarbanes, Elise Baker, Jesse Robare and the Henry Larom family.

April 14, 1930, 7 p.m. – There seems to some trouble between Mrs. Halsburg making a nuisance of herself at No. 57 Bloomingdale Ave. where her husband is a patient being kept by the county. Dr. Packard seems to think that she has a right to be with her husband. The county officials do not want her around after 9:30 p.m. as she is annoying to the nurses, fighting with her husband and disturbing the other patients. — Officer Jones