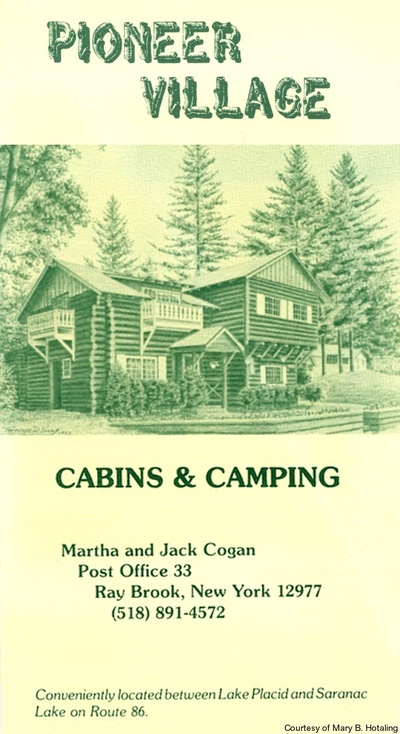 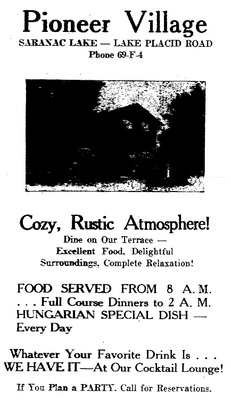 Pioneer Village was owned by Martha and Jack Cogan in 2001. The main building burned in 2005, and the rest of the cabins have since been torn down. In 2018 the property is the site of a large Tractor Supply store, set back from the road.

In 1950, it was owned by Joseph and Cornelia Bergmann, according to a liquor license notice.

Leonard L. Hofmann, former editor of the Free Press and manager of radio station WHDL here, expects to purchase Pioneer village, a cabin settlement at Ray Brook, two and one half miles from Saranac Lake. Hofmann expects to close the deal soon after he returns from his home in South Bend, Ind.

Pioneer village includes 10 cabins and a lodge. Each cabin is equipped with improvements and the capacity accommodations for each cabin is from four to eight persons. There is also a central sewage system, central water system and other improvements. The lodge contains a dining room and a business office. 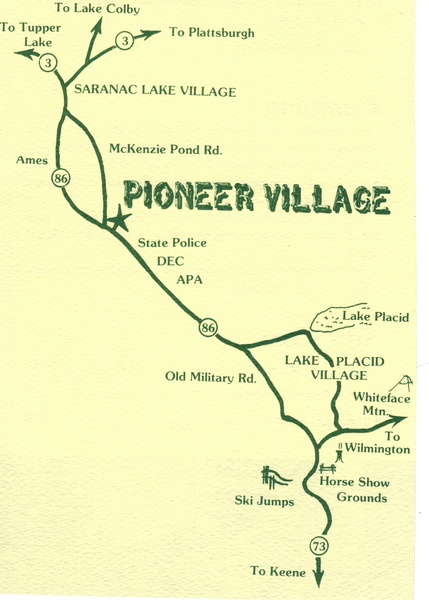 Map from Pioneer Village Brochure, (undated).The property is owned by William Parsons, formerly of Saranac Lake. While the sale price has not been announced, it is understood to be in the neighborhood of $25,000.

Hofmann said in the event the deal is closed, he will open the cottages within a few weeks. They were closed by Parsons two years ago.

Hofmann left Tupper Lake to manage WHDL at Olean, NY., and subsequently served with a South Bend advertising agency where he was an account executive several years. He returned to New York state two weeks ago.

Lake Placid News, August 11, 1950From the Lake Placid-North Elba Historic Preservation Commission survey, September 30, 1991, Ray Brook Auto Tourist Accommodations section: Pioneer Village, on the north side of Route 86 at the corner of McKenzie Pond Road (the route of the former Old Military Road) is marked by the handsome, L-shaped, two story log office with chalet-style detailing. The one-story rustic cabins, with a total of fourteen rooms, extend east along the road from this main building, but they are principally oriented to an interior square away from the road.

The fire started in the living room of the main log house on the seven-acre property, according to Saranac Lake Fire Chief Robert Girard.

Derby said the only occupant of the building escaped without harm, and no one else was injured as firefighters battled the fire during the morning hours and returned to the station shortly after noon, using approximately 400,000 gallons of water to extinguish the flames.

Derby said the main building was “gutted by fire,” but the other cabins on the seven-acre property sustained no damage.

Derby said the fire department had Adirondack Ventures listed as the owner of the property; however, the Enterprise was unable to make contact with the owner as of press time this morning. The owners of the property were present at the scene Sunday, Girard said. 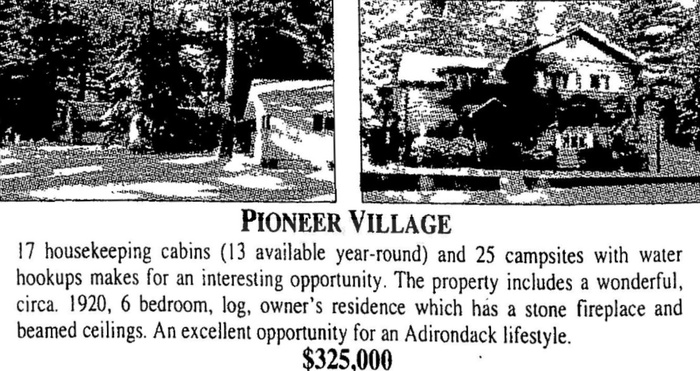 Luthier Rosenthal, of New York City, known as the “Stradivarius of the 20th Century,” is visiting Saranac Lake and staying at the Pioneer Village. Mr. Rosenthal, who has made violins for Heifetz, Kreisler and Mischa Elman, is one of the most noted craftsmen in his field. He charges a minimum of $2,000 for each instrument that takes many, many months of painstaking care and know-how to finish. He is also an expert bow maker, with $250 the “low” price for one of these.

Russian born and educated in Europe, he lectures yearly at Columbia University on the history of violins.