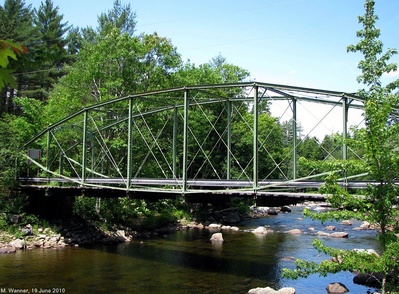 The Walton Bridge was originally constructed c. 1890 for the Western Plank Road Company to cross Black Brook. In c. 1924 it was moved to a crossing of the AuSable River in Keene, New York. It was destroyed by the floodwaters of Tropical Storm Irene on August 28, 2011

"Let the words of my mouth and the meditation of my heart, be acceptable in thy sight, O Lord, my strength and my redeemer —Psalms 19:14.

"There are nettles everywhere, but smooth green grasses are more common still; the blue of heaven is larger than a cloud." —E. B. Browning.

Perhaps you, too, have heard the old expression, "He was going two-forty on the plank road," and have wondered, as I have, just how fast "he" was going. I've never been quite sure, but suppose it must have been some super-speed attained because he was traveling on the "plank road." And in its day the plank road was the height of luxury in a road.

When this country was first settled the roads were only trails, then they were widened out for ox-cart travel, and for horse-drawn wagons. Of course the roads were of dirt or whatever kind the local territory happened to be—clay, sand, gravel and oft-times mud. Clay is hard and rough in dry weather, and when wet it is gooey and sticky and very hard to travel in. Sand when damp isn't too bad, but when dry how it rolls and blows, and it is hard traveling through it when if lays inches deep in the road. Some gravel packs down and makes a very good road. Other gravel will not pack and is somewhat like the sand, only coarser. And mud — well, mud is mud and sometimes there's no getting through it.

In the early days the muddy spots were often corduroyed, which was a system of laying small logs crossways on the road, close together, thus bridging the muddy spots. (The logs layed thus close together makes the same sort of ridged pattern that corduroy cloth has and hence it kept the name—corduroy.) It was rather bumpy to travel over, but at least it kept you out of the mud.

The more a road was traveled over the worse it got. The heavier loads cut into the ground deeper and deeper, and made the hauling of such loads a hard task for both the horses and the driver. Something had to be done — therefore, men who had much hauling to do went through necessary proceedings to form themselves into road companies to construct roads.

It seems that the first such company in the Town of Franklin was the Western Plank Road Company. The record does not say if the Company was made up of local men or of outsiders but wood was plentiful and it seemed the only solution for the problem of building better roads. The Western Plank Road Company must have had a lot of hauling to do for it is recorded in August, 1850, that this Company paid "One dollar for a grant . for the purpose of constructing a plank road . . . between McLenathan Falls" (now Franklin Falls) "and the Town line of Black Brook and Franklin." The record goes on to state that the road must be so constructed that the intersections [illegible word] ing of other roads could be conveniently entered upon. The company was also to keep [illegible line] as practicable" during the building of the road.

What a job with the machinery of those days to grade a road so that planks would lay evenly from end to end across the road, and for each to lay smoothly beside its neighbor on each side. And what an enormous number of planks it must have taken for it is nearly three miles, from Franklin Falls to the Town line of Black Brook.

The record states that the "grant" was for a period of thirty years. The late John R. Merrill was Supervisor: Alidon Amadon and Thomas Goldsmith were the road Commissioners and their are signed to the record.