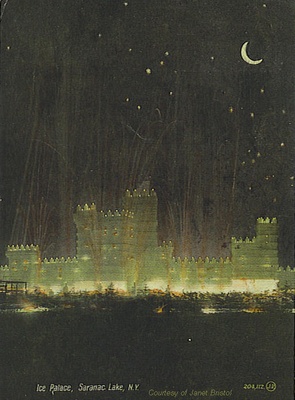 Fireworks over the Ice Palace, 1901 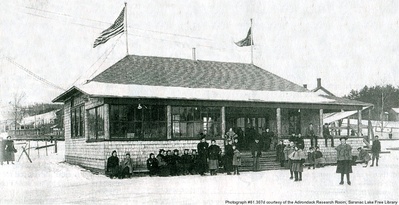 The Pontiac Club House was located in what is now the park across River Street from the foot of Franklin Avenue, roughly the location of the Ice Palace today. The simple but stylish structure appears to be primarily a warming house for skaters. The left-hand end of the porch is equipped with windows to break the wind that sweeps in across Lake Flower: many cure porches were then being provided with similar glass screens. Barbara Parnass made this print from a glass plate negative attributed to photographer William L. Distin. The Pontiac Club was established in November of 1896. It sponsored the first Winter Carnival that was promoted ahead of time in 1898. However, a one-day event reported after the fact in the Essex County Republican as a Winter Carnival was held in the early months of 1897. It seems the Pontiac Club held a trial activity the first year, and developed it into a full-blown carnival the next year, complete with the first Ice Palace. 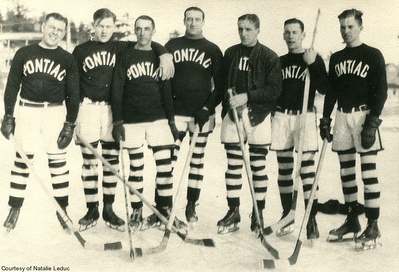 Organized winter sports made their debut in North Elba in November 1896, when a group of civic leaders in Saranac Lake formed the Pontiac Club, to encourage outdoor sports and games and not incidentally for the healthy entertainment of tuberculosis patients who were staying through the winter in the village in greater and greater numbers. The group built a clubhouse on Lake Flower in an area that came to be called Pontiac Bay. In front of the clubhouse on natural ice were an eight-lap-to-the-mile skating oval and a hockey rink. The highlight of the club’s season was its Mid-Winter Carnival, first celebrated in February 1897, the origin of the Saranac Lake Winter Carnival still celebrated today. Athletic events included hockey (the Pontiac Club team played a team from Malone); speed skating races; a figure skating competition; and a one-mile run on snowshoes. An Ice Palace was built, beginning in 1898, and a fancy dress ice skating party was held. A parade with decorated floats wound through the streets, in which there were “many ski processions,” according to a participant, Henry Baldwin, son of a prominent Saranac Lake doctor. The Ice palace was “stormed” on the last night, with torches and Roman candles providing ammunition. “Skaters from all over the world came to compete in the international championships at the Pontiac Club,” wrote Bruce Coulter, another eye-witness. Ed Lamy of Saranac Lake became “the champion speed skater of the world,” breaking the tape “in front of the great competitors from Norway, Sweden, Canada, and the United States.” 1

In 1896, just 20 years after Trudeau's arrival, a group of young men made up of some local enthusiasts, and possibly some of Trudeau's more ambulatory patients, joined to form the Pontiac Club. The main purpose of the organization being "the promotion of outdoor sports and games, and the encouragement of social intercourse." Their clubhouse was located beside a bay of Lake Flower nestled between River Street and Lake Flower Avenue and quite naturally it became Pontiac Bay.

Two years after the club came into being the members came up with a brand new idea: Why not a Mid-Winter Carnival to ward off the doldrums that usually occurred after the gaiety of Christmas and New Year's holidays? Putting their ideas into action during the winter of 1898 the first carnival was a huge success, and Saranac Lake was on its way to becoming a popular winter sports center. The huge Ice Palace was a major attraction which served as a centerpiece for an impressive list of activities that included competition in all of the major winter sports and games. There were bobsleds, hockey games, ski jumping, costume balls, a parade of floats and fancy skating, but most of all there was speed skating races. The Pontiac Rink played host to international speed skating events that drew participants from around the globe. To further enhance these races Saranac Lake could boast of its local son, Ed Lamy, as being the greatest champion that the sport had ever known...

A January 1906 magazine ran an article which printed in part: "Time was when the Adirondacks were cut off from the rest of the world in winter, but all of that is now changed. It is less than a 12-hour ride from New York to Saranac Lake, the metropolis of the woods, a thriving village, with good hotels and boarding houses, and stores where evey need may be satisfied. As a result, excursions into the woods, with a view to enjoying delights of winter weather such as are foreign to the average city resident, are becoming more numerous every year.

"In no other town or village in me state is there such systematic and successful effort made for the promotion of winter sports as in Saranac Lake. It has a permanent organization and directing agency, represented by the Pontiac Club, which has been in existence for eight years. The club provides for and maintains a fine outdoor skating rink, which is open every weekday and evening, and in addition, a clubhouse, warmed, and with suitable conveniences, in charge of a superintendent."

What the article failed to mention, in regard to the skating rink, was that the one-sixth-mile oval and the hockey rink in the center were both illuminated by electric lights shining from poles set in the ice. In addition, music from a loudspeaker floated out over the rink from the clubhouse to add to die pleasure of skating under the lights; what could be more romantic?

Some free advice was being offered for me uninitiated city-dwellers who were planning to come to the mountains to enjoy winter sports. Canadian snowshoes could be purchased for $2.50 and die necessary moccasins could be had for anywhere from $1 to $3.50. Two pairs of heavy wool stockings should be worn inside the moccasins. In addition to snowshoeing there is also "skeeing" and the skee is described as "a narrow, smooth piece of wood, several feet in length." In Norway there were "skee" jumpers noted for their dexterity and by 1918 our own Saranac boys were ski jumping from a platform on Blood Hill above Lake Flower. The late Russell Demerse was one of the brave lads to tackle this sport...

SARANAC LAKE, N. Y., Jan. 23.— One of the chief attractions of Saranac Lake this Winter is the Pontiac Club, which has been organised by a number of residents and visitors for the promotion of sports, such as tobogganing, skating, snowshoeing, and hockey.

An elegant toboggan slide has been built on the high hill back of Tousley's, and the momentum received thereon is sufficient to carry one all the way across Lake Flower, and even to the skating rinks far up the bay. This large skating rink is always kept cleared of snow, and a good skating surface provided by the club. A handsome and convenient clubhouse has also been erected, and it is the purpose of the management to provide the patrons with all the conveniences in the clubhouse, for the comfort of spectators. It is confidently anticipated that carnivals and exhibitions will be features of the Winter amusements, and nearly every one in the vicinity is heartily interested in the enterprise.

Electric lights have been placed around the rink and at frequent intervals along the toboggan track, and hundreds of men and maidens gather here in the evening and, cheered by the brilliant lights and the music, play games upon the polished floor which the great North King has made for them. Others, less used to the glittering skate, seek the slide upon the hillside, and, gaily decked in colored flannels, shoot on toboggans down the white path between banks of snow, shouting in joy at the glorious sport.

Usually for several months the sleighing is delightful, and almost any day hundreds may be seen driving gaily decked horses harnessed to handsome sleighs. The groves of pine on every hand contrast in the most poetic way with the leafless forests embraced in the same range of vision. The green of the former becomes more beautiful by comparison.

The members of the Pontiac Club of Saranac Lake have decided not to hold a carnival in that village next winter. These carnivals have been uniformly successful, the receipts of last winter's sports being $1,970.46 as against $1,955.62 for the preceding year. At the annual meeting of the club last Tuesday Mr. Duryee called attention to the fact that the Pontiac Club, as at present conducted, is open only during the winter months. There is an active demand for the opening of the club house during the summer also, and there was much discussion of this feature of the club life at the meeting Tuesday. It is not unlikely that the scope of the Pontiac Club will be broadened to include this feature. Officers were elected as follows: President, John Harding; vice-president, W. F. Roberts; secretary, C. P. Heyl; treasurer, George V. W. Duryee; executive committee, the officers together with William Minshull, Dr. F. E. Kendall and W. H. Larom.