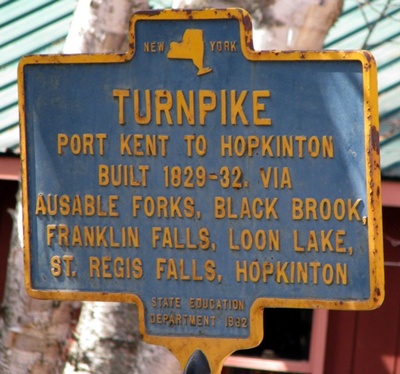 The Port Kent and Hopkinton Turnpike was once one of the most important roads through the northern Adirondacks. It was a plank road that began in Nicholville, a small hamlet in the town of Hopkinton on the north bank of the St. Regis River. It headed east on what is now Port Kent Road to Saint Regis Falls and Everton, to the hamlet of Duane via the Red Tavern Road and thence to Loon Lake and Merrillsville via County Route 26 (formerly 99); this road is still known as the Port Kent–Hopkinton Turnpike, one of only two highways along the turnpike's route that still makes reference to the old toll road name.

From Merrillsville, the turnpike continued east (crossing modern New York Route 3) via Alder Brook Road to Union Falls and thence via Union Falls Road, Silver Lake Road and Turnpike road to Guide Board Road to Au Sable Forks. Then following what is now a series of state-maintained highways (now part of NY 9N) from Au Sable Forks to Keeseville and then to the hamlet of Port Kent on modern U.S. Route 9 and NY 373.

From "Reminiscences of Clintonville, New York" by L. Grant Palmer, 1921

Old residents used to tell of the travel on this road, they said that it was not unusual to see a string of teams nearly a mile long taking their produce to and from the markets along the river and shipping at the Lake ports. This plank road was made of planks about eight feet long and three inches thick. The land on each side of this old turnpike was taxed on each side for a width of three miles. There were tollgates at intervals along this road, and I presume that the income from those sources was quite large. After the railroad was built to the point of rocks [Point au Roche], the Rogers Co. and the Peru Steel Iron Co. made that their shipping point and the plank road from Clintonville to Keeseville was abandoned.

A person riding along our fine highways now in their expensive automobiles cannot have any idea of the business activities that were so extensive along the valley years ago, or of the benefit to the teaming operations, that the old plank road was to the early settlers and the early business activities. When my mother's father settled on the farm two miles this side of Ausable Forks, there was no highway along the river between Ausable Forks and Clintonville, the road at that time went over the plains and for years while the tollgates between Ausable Forks and Clintonville were kept open people traveled the road over the plains to avoid paying the toll.