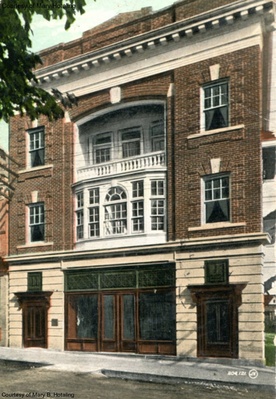 The Post Office Building was apparently the first independent location for the post office named "Saranac Lake, New York." From the beginning of service here, it apparently moved around from the home or business of one postmaster to that of the next. These locations do not appear to have been recorded. There were other post offices operating concurrently in the vicinity, several of which were eventually centralized at Saranac Lake. The Post Office Pharmacy, while named for its nearness to this post office, did not occupy the same premises.

This building was later the location of the Mountain Home Telephone Company and then the Grand Union grocery store and finally Meyer's Drug Store. It succumbed to fire on November 18, 1958, when it was described in the paper as a three-story brick block with eight apartments upstairs. All occupants were safely evacuated. By November 30, "wreckers were already beginning to knock down the top floors of the burned building." Bill Meyer said that "25 feet of additional land had been purchased behind the store, and that the new store would be one story high but half again as big." The remodeled store housed Meyer's Drugs, and later Meyer's Gifts, until it closed 2007. After being vacant for several years, it is now [2011] home to the Downhill Grill. 1

—A new building to be used as a post office is in progress near the corner by the Berkeley. A stand is put up near it for the band. Their open air concerts are much enjoyed.

"After sitting vacant for four years, the former Meyer's gift and drug store on Main Street is now the village's newest restaurant. Joe and Ken Lawless, who had run the Downhill Grill in Lake Placid for 14 years until last month, open a Saranac Lake version of the restaurant Friday." From the Adirondack Daily Enterprise, Thursday, May 26, 2011.

2010-04-28 21:19:27   You're right— it was in Milote Baker's store. Take a look at that page, and you'll see the story in the last paragraph. Sounds like we should do an article on Thomas Ward. Do you have much information on him? Any photos? —Mwanner