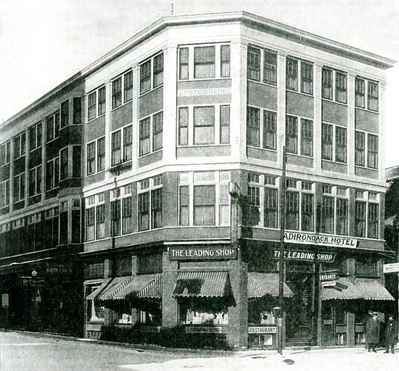 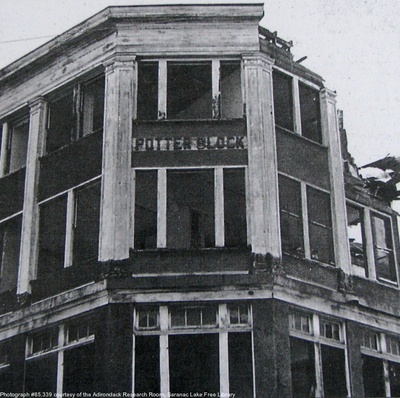 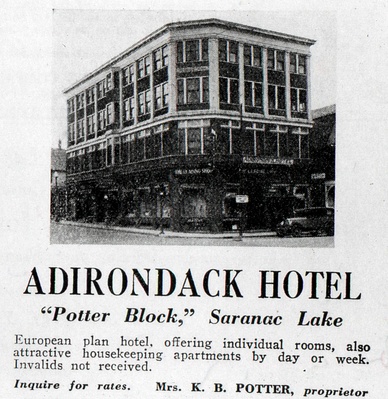 Potter Block advertisement, Journal of the Outdoor Life, 1931 Address: torn down in 1978

The Potter Block was located on the corner at the west end of of Bloomingdale Avenue. Across Broadway stood the seven-story Alpine Hotel, and the St. Regis Hotel was across Bloomingdale Avenue on the southeast corner. Three multi-story masonry buildings made the busy corner a very urban spot.

Sanborn maps show grocery and plumbing businesses on the site in 1895. The building seems to have been remodeled and named The Arlington by 1899. In 1975, Bill McLaughlin wrote that Dave Durgan constructed the three-story corner hostelry but sold it to James Leonard very soon after its completion. The Arlington was a family hotel, and always full of guests, visitors, salesmen and travelers. Its porches were popular with crowds gathering to watch Winter Carnival parades and other Broadway delights. The Arlington boasted a regular dining room for its patrons and a side dining room. There was also a bar, barbershop and a private livery stable for Leonard's race horses but big enough to accommodate the horses of guests. Johnny Patnode had charge of the stables, which were reached through the alley on Bloomingdale Avenue. In 1919, the Adirondack Record reported that the hotel - then owned by George L. Starks and James A. Latour — closed abruptly when the manager disappeared with everything that was movable and of value. In 1920, a vocational training school was established there for tubercular servicemen from World War I.

The Arlington was sold to Kit Potter about 1920. By 1924, the building had been redesigned, the porch spaces enclosed, and a fourth story added, with the name "Potter Block" inscribed near the top of the new brick facade. "Kit" was likely a nick-name for entrepreneurial Katherine Brown Potter, who in 1931 advertised the Adirondack Hotel in the Journal of the Outdoor Life.

From the end of 1971 until 1977, the street-level storefront of the Potter Block housed Jerry's Giant Subs, a submarine sandwich and pizza restaurant managed by David Bodah. Jerry's was the Saranac Lake branch of a restaurant of the same name that had existed in downtown Plattsburgh and had a branch in Tupper Lake for some years prior. Jerry's re-opened next door, at 4 Bloomingdale Avenue, on September 1, 1977,2 prior to the demolition of the Potter Block, and remained there until going out of business in 1980.

From: Phil Gallos, "Throw-away Buildings. A Saranac Lake Notebook," from the Newsletter of the Center for Adirondack Studies, North Country Community College, c. 1980.

The intersection of Bloomingdale Avenue and Broadway once boasted three of the largest and proudest buildings in Saranac Lake: the four-story Adirondack Hotel (commonly known as Potter Block) , the five-story Hotel St. Regis, and the Hotel Alpine. . . .

Although the Alpine and Potter Block were both habitually labeled "fire traps," the bureaucrats (who were doing most of the labeling) got to them before fire had a chance.

Both structures had sprinkler systems -- good ones. The men who demolished the Alpine were quite impressed with the building. Those I spoke with didn't believe it was a fire trap. As for the Potter Block, one Saranac Lake fireman said this: "Potter Block had the best sprinkler system in town. We had lots of small fires in there, but they never got anywhere."

Then after a moment's thought, he added, "Of course the best sprinkler system in the world doesn't do you much good if it's shut off."

Potter Block had been softened for the kill by years of neglectful ownership. Toward the end, the building was systematically gutted, mostly for plumbing and heating salvage.

Everyone could agree that the Potter Block was an eyesore. Few, however, would venture that such a fate might have been avoided or should have been prevented. . . .

So the Potter Block and the Alpine were lost. For a month in Autumn '77 and a month in Spring '78, people stood around with horrified expressions and watched the engines of destruction reduce practically every  part of the two buildings to useless rubble. About the only things the demolition crews saved were the great, six-by-twelve inch hardwood beams from the Potter Block and the steel from the lower floors of the Alpine--steel which, according to a number of the building's critics, wasn't there.

I often wonder how many houses could have been built with the materials from the Alpine and Potter Block. . . . All those bricks and timbers and fixtures, all those doors and windows and beams and pipes, all those sinks and lamps and windows were trucked away as fill for a parking lot on Ampersand Avenue.