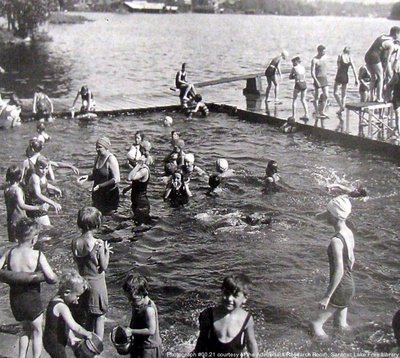 Prescott Park Beach, late 1930s. Swimming lessons were offered by Mrs. Elizabeth TenEyck. Adirondack Daily Enterprise, August 9, 2008 Prescott Park is a park on the northeast shore of Lake Flower established about 1925 through the efforts of Mary R. Prescott, a founding member of the Village Improvement Society. The land had been a mill site belonging to Branch and Callanan; it was acquired for $1700. 1 It became the site of the village beach. 2 The public beach was later moved to Lake Colby, amid considerable controversy. 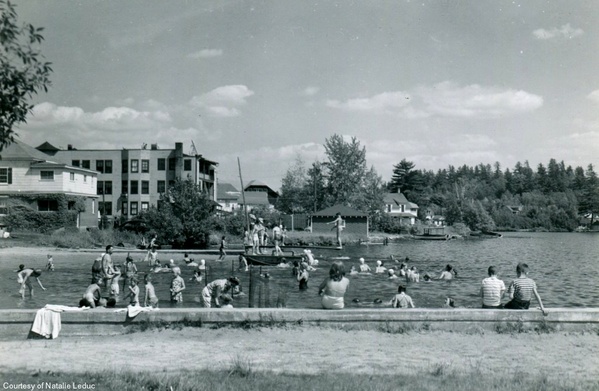 PARK PROJECT FOR SARANAC IS DRAWN UP

Saranac Lake—A $100,000 improvement project involving the construction of a new dam at the head of Lake Flower and a picturesque bathing float, beach, park site and building addition to house the Saranac Lake Craft and Study Guild has been drawn up by Mayor Thomas P. Ward and Village Manager Miller Johnson. 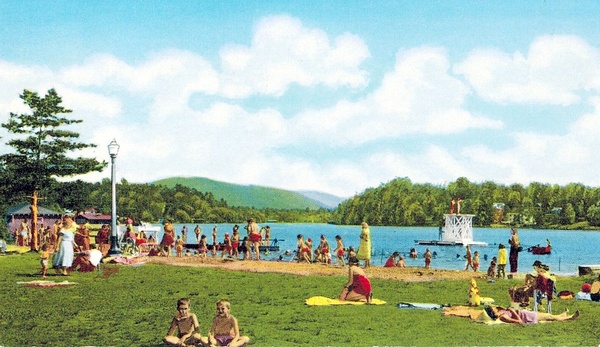 The project, which is to be carried out under WPA will be started in early March. Plans are to be drawn up by Architect William G. Distin for the approval of the village board at its next meeting.

The project's principal value will be the beautification of the unsightly lake head property located about the present wooden dam be low the village building. The Paul Smiths Light and Power Company will spend $10,000 for the construction of a new dam and about that appropriation will grow the fund from which the entire improvement will be made.

The preliminary architects' sketches show ornamental stone step leading from the present concrete bridge to a judge float and raft to be anchored at the proposed beach which will occupy the lake shore where the unoccupied Paul Smiths house now stands. The utility already has granted the village permission to demolish the structure.

The road on Riverside Drive from Main Street will be widened so that cars may swing on to that residential road from the main thorofare with less danger. It also will eliminate a dangerous traffic condition from Lake Street.

A high retaining wall is to be built on the site of the present wall on the west side of Riverside Drive and a large portion of the embankment leading to 11 Riverside Drive will be cut away.

The head of Lake Flower at the point of Riverside Park will be utilized for a boat landing. Previously there was no anchorage for any pleasure crafts at that end of the lake. Mayor Ward's plan also calls for the development of Riverside Park, with a possible bandstand as well as a pavillion.

An addition will be built to the present village building, and in the new wing will be housed the Saranac Lake Craft and Study Guild and the local art league. The park on the island in the Saranac River beneath the village dam which has been under construction for the past year is to be completed.

Mayor Ward outlined part of the extensive program to the public meeting which ratified the agreement reached between the board and the Paul Smiths Light and Power Company and received the approbation of the meeting. The meeting apparently started Saranac Lake's own era of good will.

The sands of time

You've got to respect the sincerity and drive of the man who helped build Prescott Park Beach. After all, he is an authority!

Wes Moody, originally made out of armor plate, still has only a few rust spots to show for a life-time of coming to grips with the realities of life.

His age is his own business anyway. Back in the early 1920s, Mary Prescott trusted both Wes and his father to help build the community beach the way she envisioned it. That's the way it was done.

But Wes is lingering under a cloud of extended guilt. Mary Prescott never wanted the beach moved, and though the guilt is not on Wes, he feels the village, himself included, should have put up a battle to keep it permanently on Lake Flower just as she originally intended.

Mary Prescott, a great benefactor of the village though not rich by any means, gave the property on Lake Flower for a public park and beach where children and citizens of Saranac Lake could relax, swim or bake in the sun.

At the time, Wes drove a team of horses for his father and qualified as one of the gifted animal handlers of the day. Prancing horses were still prominent on the streets of the village in the "Roaring '20s."

By "gifted" we mean he could take an ornery, mean and unpredictable horse, or an unbroken horse, and straighten out his idiosyncrasies. Wes could make a good honest working horse out of an apparent misfit or maverick.

Miss Prescott was aware of the problems of building the beach and she knew that horses and wagons were essential. Wes was hired to haul in good, screened sand. He worked 12 hours a day.

Most of the river was filled with sunken stumps and whatever was left over from lumbering days. Lake Flower was a graveyard of rotten, waterlogged timbers and twisted roots resting in mud and ooze, a real hazard to anyone wishing to enjoy a swim that necessitated diving.

Wes recalls it like it was yesterday ... the building of the beach and the horses Brown Dan and Mollie.

Mollie had been the victim of a barn collapse, and when they dug the fallen timber and barn rubble off her, they expected to find a dead horse

Mollie rolled her frightened eyes at the Samaritans and was able to struggle to her feet. But Wes says that from that day on she was "crazy Mollie" to those who knew her history.

She was still a fine worker, but when she would get her eye fixed on something a hundred yards down the road, she would run straight for it at full speed and stop on a dime when she got there. "Whoa Mollie. Whoa!" didn't help.

Mollie was famous for scaring pedestrians on the village streets during her frequent high-speed dashes.

But she loved the water, and so did Brown Dan. Day in and day out, Wes drove the pair into the water belly deep to unload the screened sand well out from shore. With shovels and a mild but active current, the sand was carried into the shallows. It finally settled and stayed. A drop-off was too far out to alarm the public.

But sooner or later, the crowds and the activity at the beach caused worries. The first lifeguards appointed by the village after Prescott Beach was designated as the municipal bathing area were Tom and Bill Wallace and Wilbur F. Tagliabue. This triumvirate of sinew and brawn established the kind of controls that didn't make people angry, just respectful.

All three were cast in the heroic mold. Exceptional athletes and masters of springboard acrobatics, the admiring young people were quick to obey the safety regulations hammered home by Tom, Bill and "Tag."

Bill Paye was assigned as the park's special police officer to maintain order, keep unleashed dogs out and to prevent littering and noisy parties when the moon came up.

When the beach house was built, the boys' band played evening concerts on the flat roof bordered by rustic Adirondack rails. The front of the building was a candy and soda stand facing the street. The main portion of the building interior was devoted to stalls where you could change into your swimsuit for 15 cents.

At the rear facing the beach was the lifeguard locker and key-board for the stalls. The guards kept first aid equipment under lock and key and stored their cars and megaphones there. The smell of iodine was strongest at this point.

An L-shaped dock extended out about 75 feet from the shore in water deep enough for the diving board. Fifty yards out in the water, a raft surmounted by a 10-foot diving tower was permanently anchored.

In June, the barrel rush combatants usually ended up in the park on severely hot afternoons and the victors tossed the vanquished into the cool water.

Bill Wallace could play the ukulele and regaled the beach crowd with Rudy Vallee hits of the day. Ukulele Ike of Hollywood fame made the instrument a beach fixture for young people, and the girls learned to swish and sway in the finest Hawaiian fashion.

Wes Moody is partly angry and partly resigned about the political move or trade-off that put the Colby location ahead of Mary Prescott's wishes. So Wes is up front, leading the petition carriers wishing to have the beach put back on Lake Flower.

For more on the neighboring buildings removed in the 1970s to create the larger Riverside Park between River Street and Lake Flower, see the Lake Placid News article, "An Explanation of River Street Plans," at the bottom of the River Street page.