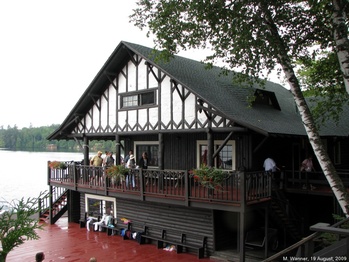 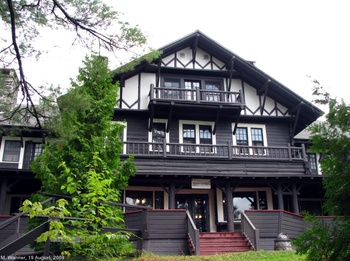 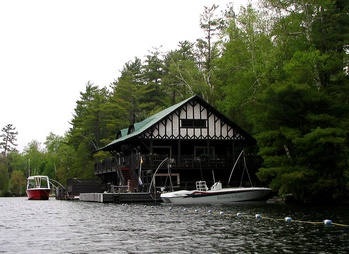 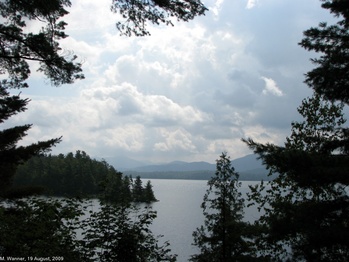 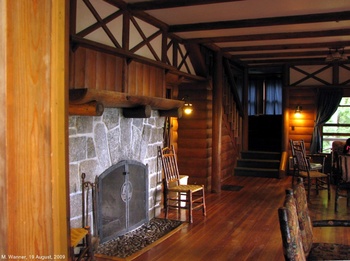 One of the 40 fireplaces at Prospect Point Camp Prospect Point Camp is an Adirondack Great Camp notable for its unusual chalets inspired by European hunting lodges. William L. Coulter's design is a significant example of the Adirondack Rustic style. It was built in 1903-04 for New York copper magnate and financier Adolph Lewisohn on a bluff overlooking the northern reaches of Upper Saranac Lake, near Camp Eagle Island and Moss Ledge, two other Coulter designs. Along with later buildings on the site, designed by William L. Distin, the compound comprised 28 structures. Its grand scale is typical of the opulent camps of the area in the great camp era.

In a departure from the tendency of camps to be sheltered in the woods, Prospect Point Camp towered over its shoreline, approached by several broad flights of steps from the water (no longer extant). The main lodge is a three story chalet with a half-timbered effect, with birch bark 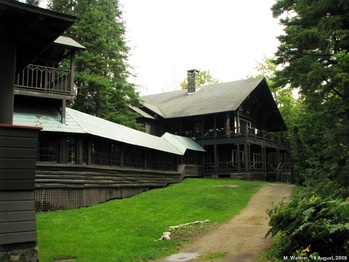 A covered walkway filling the role usually played by brick or stucco. Birch bark is also used as a ceiling treatment between the beams. Interior walls were finished with local spruce, but also with southern pine, stained green or tan. The boathouse was the largest on the lake. The camp had a gasoline powered generator, and telephones throughout. 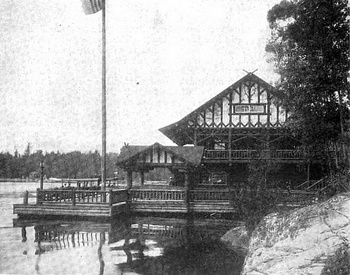 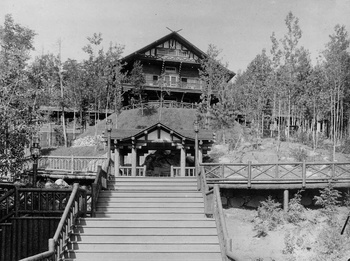 The approach to Prospect Point Camp
from the boathouse, c. 1904
Courtesy of Adirondack Experience.Adolph Lewisohn died at the camp in August of 1938. In 1940, the camp was sold to W. Mladek Willy, banquet manager of the Waldorf-Astoria hotel, who operated it as Sekon in the Pines, a hunting lodge and restaurant. It was sold again in 1950 to Sara and Irving Blum, who ran it as a summer camp, Camp Navarac, for young Jewish girls. In 1969, it was purchased by Young Life, a Christian 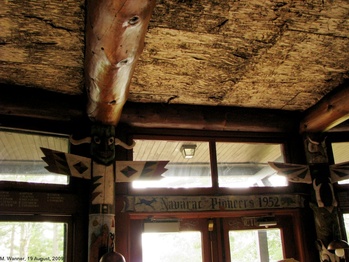 Birch-bark ceiling, totem poles from the girls' camp years non-denominational ministry based in Colorado Springs, Colorado, who use it for one-week long educational camping sessions.

The camp was included in a multiple property submission of 10 camps for listing on the National Register of Historic Places, and was itself listed in 1986.1

From millionaire's retreat to religious camp: A history of Prospect Point on Upper Saranac Lake

There is a long history of religious camps in the Adirondacks yet you will not find too many located in one of the Adirondack Great Camps built by America's millionaires at the turn of the century. One of these unique camps is Prospect Point Camp on the Upper Saranac Lake. It is called Saranac Village today and is owned and operated by the Young Life Ministries serving young people of high school age.

Adolph Lewisohn, founder of a successful copper industry, hired architect William Coulter to build a Great Camp on his 4,000 Adirondack acres in the spring of 1903. Materials for the camp had to be transported by barge across the lake since the road was not finished until 1909.

According to the historical record the Prospect Point Great Camp complex includes as many as 40 buildings. There were 28 buildings left when Harvey Kaiser wrote the Great Camp book in 1982.

Prospect Point Camp reflected some German influence on the design from the owner's background. The large gables and overhanging roofs over the balconies and porches were requested by Lewisohn. The walkways between the buildings were glass-enclosed to keep out the weather. Most Adirondack camps left them open.

Lewisohn spent some two and a half million dollars on Prospect Point. He required a staff of 40 which included a singing teacher, a chess player and a caddy. When his son complained he was spending his capital Lewisohn responded, "Who made it?" The successful businessman also said, "(I) made all the money I wanted so I quit!" Lewisohn died in 1938 and the Great Camp was sold to Mladek Willy, a New York City hotel banquet manager. He operated it unsuccessfully as "Sekon in the Pines" until 1950.

Prospect Point became a summer camp for girls in 1951. It was operated by Mr. and Mrs. Blum of South Orange, N J., until 1969. The property was reduced to 105 acres and acquired by the Young Life Christian group in 1969. The camp provides a summer camp experience for high school students offering a wide variety of activities.

The camp boasts an extensive water slide, a Jacuzzi, a pool and game room, water skiing and parasailing, among other more traditional activities.

In 1904 an article in Town and Country magazine called Prospect Point "A Quaint Lodge in the Country." That it is. The Great Camp at Prospect Point reflected the popular Japanese influence on architecture of the time with the curved roof lines and once crossed logs extending above the peaks. The half log siding used in many of the Great Camps was used throughout Prospect Point. Birch bark facing to simulate stucco, framed in half logs, was used in the gables.

The buildings at Prospect Point are connected by paths of crushed stone, rustic bridges and pavilions. Some of the unique fireplaces have over-mantels of peeled logs set in a pattern. The dining room walls have real birch bark wall paper framed by 10-inch logs. Wrought iron and copper were used throughout the buildings for light fixtures.

The Young Life Ministries face a challenge today not experienced by the original builder in maintaining the Great Camp. Any restorations or new construction falls under the Adirondack zoning regulations.

Such is the life of an Adirondack Great Camp today. Each faces problems of changing ownership, some used by youth camps, changing time and maintenance problems, and the quest for survival. They are as much a part of Adirondack history as its woods, waters, mountains and people and should they not survive they would become the "dinosaurs" of our modern times.

An elaborate camp is nearly completed on the Upper Saranac Lake for Adolf Lewisohn, the "Copper King," who recently purchased a plot of ground of S.B. Ferris on Prospect Point. There are about sixty acres in the camp site, and the location is one of the finest in the mountains. The camp consists of the main building, dining room, a large cottage, boathouse, guides' house, power and electric-light plant, &c., and the buildings, all of which are connected, cover the entire point.

The most elaborate camp in this part of the Adirondacks, perhaps, is that which has just been completed for Adolph Lewisohn on Prospect Point. It has been two years in building and every effort has been made to make it distinctly Adirondack in style and material. Native woods have been used with great effect.  As one glides into Gilpin Bay the Lewisohn boathouse, a large, substantial structure of spruce logs, slabs and poles, with gables of birch bark paneled with spruce, is seen. On the hillside above is the main lodge, with wings, a gable over the entrance and a wide veranda above a foundation of huge logs. Balconies extend across the central portion of the lodge, which is built of spruce logs for the first story and of polished plank and logs for the second.

The most attractive room in the camp is the living room of the main lodge. It is of magnificent proportions and has been handled in excellent taste, with massive ceiling beams and wide planks for the walls. There is a fireplace that has few equals for beauty. It is of rock taken from a neighboring Adirondack peak, but it is unusually rich in jewel-like markings. The hearth is of small cobbles. The room is stained a tan color and the color scheme is worked out to the last degree in cocoa rugs and divans, with cushions of corduroy. There are covered passage-ways connecting the other buildings of the camp.

Adolph Lewisohn, accompanied by Mrs. Arthur Lehman and Mrs. Albert Rossin, came from Elberon this week to spend a month at his camp, Prospect Point.

The tragedy occurred when the chute, three-quarters of a mile long and extending from a knoll on the Lewisohn Estate oout on the ice of the lake, snapped in three places and sent the toboggan, and its occupants crashing 20 feet to the ice.

For ten days the slide had withstood the weight of tobogganists who made merry at the camp during the holidays. Seconds before the Shelleys got into a toboggan and with shouts of glee shot down its iced surface Maurice Vosburgh and his sister, Alice Vosburgh, of Lake Clear, had made the thrilling descent. Ice weighted and made soggy by recent rains is believed to have caused the slide to collapse.

When the great structure disintegrated the three occupants of the toboggan were thrown to the ice with terrific impact. Mr. Shelley's neck was broken.

News of the accident spread rapidly to Saranac Lake and Tupper Lake. Dr. Julius Cone of Saranac Lake and Dr. E. M. Austin of Tupper Lake rushed to the camp. Despite their efforts, Mr. Shelley did not regain consciousness. Miss Shelley was painfully injured but it is expected she will soon recover.

As has been the custom for a number of years the estate had been made ready for winter occupancy at a cost of several thousand dollars and a gay party ;had been enjoying winter sports there as guests of Mr. Lewisohn during the holidays. The chute, together with rinks and curling lanes, had been prepared especially for the sojourn of the New York people.

The Lewisohns and their guests had returned to New York when Frank Turner, caretaker at the estate for many years, invited a party of friends, including the victims of the accident, to the camp. The frolic had just got under way when the tragedy occurred.

The camp is situated in what is a veritable wilderness at this time of the year and it was some time before help could be obtained from Saranac Lake and Tupper Lake, between which towns the place is located.

The tragedy came as a climax to a series of misfortunes which have descended upon the Shelley family in the last five years. Only three weeks ago Mr. Shelley's wife died in a Montreal hospital following an operation.

Mrs. Shelley was the widow of Captain John H. Shelley, brother of the victim of the tragedy, and a partner in the garage and tool business in Broadway. Captain Shelley had passed his examinations for a commission in the army in December, 1918, when in a New York hotel he was stricken and died within a few minutes.

Nathan Shelley was prominent in Masonic circles and was active in the promotion of winter sports. He is survived by two daughters, Alice and Helen Shelley of Saranac Lake.

Mrs. Maude Shelley was also active in village affairs and for years [was] head of the Women's Relief corps.