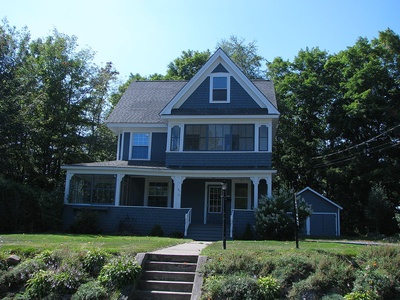 Queen Anne is an architectural style based initially on styles from the reign of British Queen Anne; in America the style developed distinctive features including asymmetrical facades; dominant front-facing gables, often cantilevered out beyond the plane of the wall below; overhanging eaves; round or polygonal towers; shaped and Dutch gables; a porch covering part or all of the front facade including the primary entrance area; second-story porches or balconies; differing wall textures, such as patterned wood shingles shaped into varying designs; dentils; classical columns; spindle work; oriel and bay windows; horizontal bands of leaded windows; and monumental chimneys. 1 Examples of the style in the Saranac Lake region include: