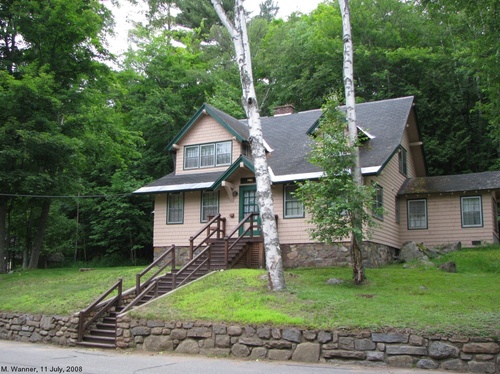 Description: This is a one-and-one-half story frame bungalow on an uncoursed, rough-cut rubble foundation. The asphalt-shingled gable roof has two asymmetrical dormers, the larger of which may be an enclosed sleeping porch. The wood shingle siding has a six-inch exposure. The front porch of the cottage was enclosed with matching shingles at an unknown date after 1957. There is an attached garage at the rear of the cottage with a three-fold door. The garage also has two Queen Anne windows of clear glass, which suggest that parts of an older building were reused.

History: This shingled bungalow is the "attractive little home . . . built at the south entrance for the Radiographer and [his] family." 1 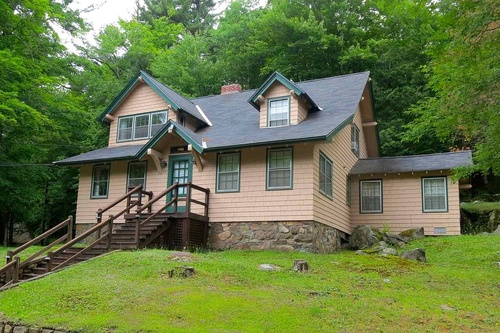 Radiographer's Cottage, 2021
Courtesy of John Eldridge
Homer Sampson (1880-1945) was a patient — the Radiographer — who became director of the X-ray laboratory at the sanatorium, which handled thousands of plates a year. Though he had no formal medical training, he was awarded an honorary Ph.D. in Science from St. Lawrence University in 1934. The Adirondack Room in the Saranac Lake Free Library displays a sculpted bust of Sampson, and his doctoral hood. 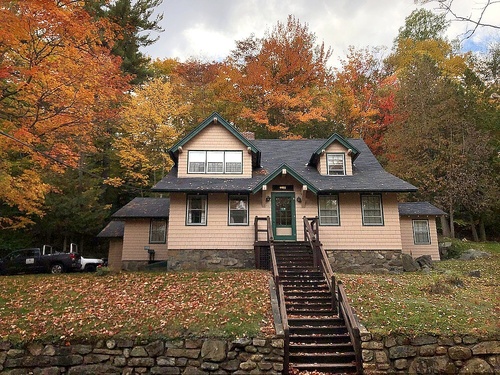 Radiographer's Cottage, 2020. Historic Saranac Lake photograph.Across the narrow drive behind the house there stood in 1993 — but no longer — a dilapidated one-room shingled house which may have been a "TB shack" (a primitive summer cure facility) at one time, and which served as a playhouse for Homer Sampson's daughter, Mary Sampson MacIntyre. A similar "shack" is still standing behind the Pomeroy Cottage in 2010, [but no longer in 2020].