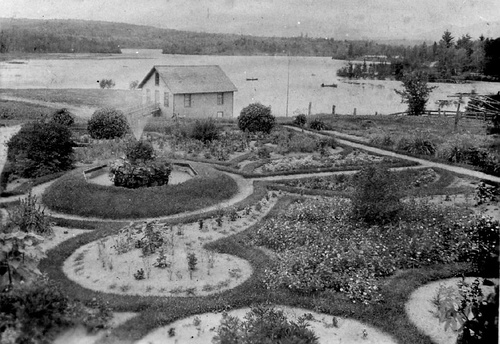 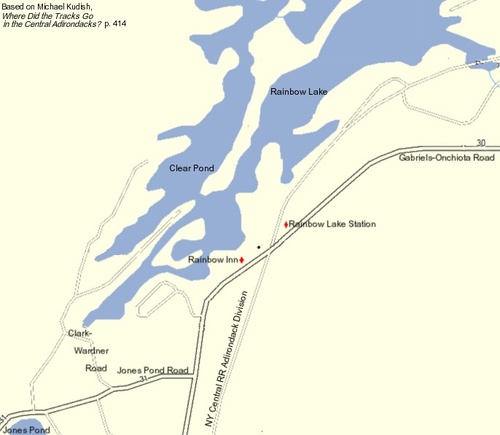 Rainbow Lake The Rainbow Inn was a successful resort built in 1862 by James Wardner, who with his brother Seth and friend Lorenzo Rand, had come to the Rainbow Lake area in an effort to cure his tuberculosis. They camped all winter in a log cabin on Osgood Pond, where they did well enough hunting and trapping that James was able to buy land in 1855, for a farm on his chosen site at Rainbow Lake. He recovered from TB to marry Delia Marshall, clear a farm and build a house that he later enlarged to become the Rainbow Inn. In 1910, the inn became the site of the Independent Order of Foresters' Rainbow Sanatorium. The inn was a temperance establishment from the outset: no liquor was served.

When the inn opened, guests would come via steamboat up the Hudson River to Lake Champlain (via the Northern Canal), then by stagecoach to Paul Smith's Hotel and finally by guide and guideboat to the inn. In 1884, Paul Smith completed a new road that connected the Old Military Road near his hotel to the Rainbow Lake road, which was then pushed through to Hunter's Home and Loon Lake. Then, in 1887, the tracks of the Chateaugay Railroad passed within four miles of Rainbow Inn on its route to Saranac Lake, and three years later, W. Seward Webb's Adirondack Division line to Malone was routed directly past the hotel.

In 1878, minister of the African Methodist Church Henry Ossawa Tanner, an accomplished artist, made the first of three trips to Rainbow Inn seeking a cure for a disease, likely tuberculosis; he reported that the visit had helped him.  He returned in 1882 and 1886. 1

The Sporting Club returned last week, bringing with them a fine buck, the result of a week's hunt at Wardner's, Rainbow Pond. Bad weather, bad cartridges, poor dogs, didn't see my sights, high prices, &c. Yes, captain, we accept all these plausible reasons for your not having more venison.

DRIVES AMONG THE MOUNTAINS AND LAKES. 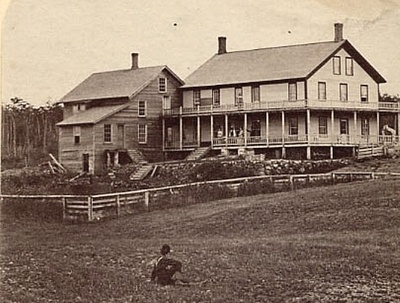 Rainbow Lake House from the West, c. 1890
Courtesy of the Adirondack Experience
[…] 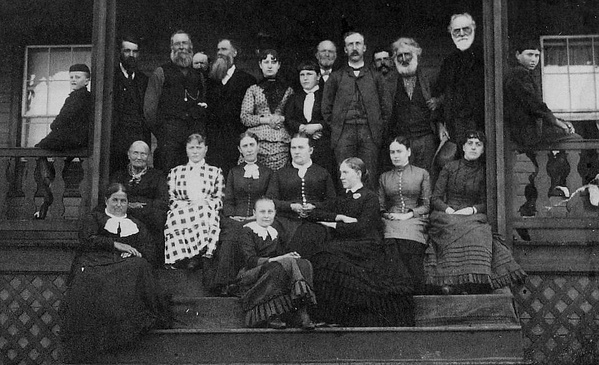 a resort kept by one of nature's noblemen, Mr. James M. Wardner. Mr. Wardner is a noble specimen of a backwoodsman. Possessed of a fine intellect, fair education, high moral character, backed up by a fine physical structure, and weighing about two hundred pounds, we think we are amply justified in speaking of him in these eulogistic terms. With his brother Seth, he settled here more than thirty years ago, when it was an unbroken wilderness. He has followed trapping, hunting and school teaching the better part of his life. He has killed fourteen bears and probably a thousand deer, and as the country became settled, "taught the young ideas how to shoot!" Mr. Wardner talks some of starting a sort of summer school of natural history for boys, and we urged him to go ahead and try the experiment at least. It strikes us there are many gentlemen in Plattsburgh as well as elsewhere, who would be delighted to avail themselves of an opportunity of sending their sons off into the woods to spend their vacations under so gentlemanly and honorable a tutor and guide, who would make their visit a constant series of object lessons, while he introduced them into the mysteries of fishing, hunting, the camp, and the life of the backwoodsman! It is good fishing at Rainbow Lake, a handsome body of water, and this has always been a great hunting center. Mr. W. has a large pack of hounds anxiously awaiting the 15th of August. His house is new and commodious.

There were two special reasons for our making a visit to Wardner's. First, to see their collection of stuffed 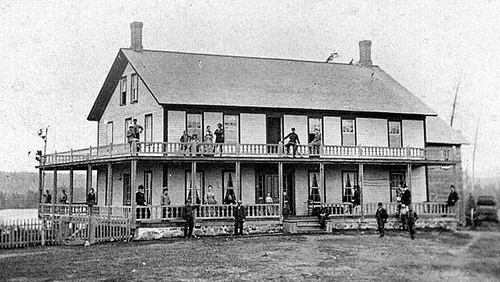 Mrs. Wardner, whom many will remember as Miss Addie S. Macomber, of Clintonville, daughter of Albert Macomber, is the taxidermist of this region. Sportsmen from all directions come here to have animals and birds staffed which they would like to preserve as souvenirs of the wilderness. One year she staffed fourteen deer heads for parties from the cities. Purchases are constantly being made from her own collection of animals and birds, but her display is still very interesting, ornamenting all the sides of one large room, and including a large bear recently killed by Mr. Wardner, a fine lynx, deer heads, fine specimens of sable, mink, loons, owls, and smaller animals and birds. At the time their house was burned several years ago they lost a valuable collection, The second attraction was their

Frequent reference has been made to interesting discoveries of ancient pottery made in this neighborhood by Mr. Wardner, which, owing to the increased interest in this subject, awakened by the recent discoveries by Dr. Kellogg, of Plattsburgh, can hardly fail to interest our readers. Mr. Wardner's most interesting discovery was about twenty years ago, near Jones Pond, and consisting of an earthen vessel holding about three gallons and nearly perfect. This is now on exhibition, at the Hall of Military Record, in Albany. The manner of its discovery was singular. He was following a deer over a fallow, from which, the fire had burned nearly all of the vegetable mould or peat, the collection of many years and, perhaps centuries, as not infrequently occurs. Curiosity led him to stop and examine a hole made by one of the deer's feet, which revealed this earthen vessel, half buried in the sand, and into which the deer had stepped. Subsequently, Mr. Wardner found two other similar vessels, which were destroyed at the time his former house was burned. He has now a quantity of fragments of pottery found on an island in Rainbow Lake, which bear a strong resemblance to the specimens discovered by Dr. Kellogg. Mr. Wardner believes this pottery to be the work of a pre-historic race.

...In an open field, in sight of Mr. Wardner's, a single cloth tent, occupied by a Miss Russell and her attendants. This lady came to the woods several years ago an invalid in search of health, as thousands of others have done. We did not learn whether she considers her health entirely restored, but were told she can travel on foot through the woods twenty miles a day for twenty successive days, and that there is it but one guide who has accompanied her on her expeditions that she has not succeeded in tiring out! She seems to be well known among the guides at Paul Smith's, and her exploits are well understood!

Near by is Rainbow Lake Inn, which is still under the management of J. M. Wardner. Rainbow is on the watershed between the headwaters of the St. Regis and Saranac Rivers, and its altitude above the level of the sea is greater than that of any other noted resort in the northern Adirondacks on the New York Central line. Not far from Rainbow Lake Inn is the station of Onchiota, which is Indian for Rainbow...

THE BOYS AND GIRLS OF OLDEN DAYS AT WARDNER'S RAINBOW HALL.

In eighteen hundred and eighty-three on a mild midwinter's night,
At Wardner's Rainbow Lake Hotel, where everything goes right,
The boys and girls turn out this eve in answer to the call
The light fantastic for to trip at Wardner's Rainbow Hall.

From Keese's Mill and Saranac they make the fastest run,
And all the gang from Paul's come up to have an evening's fun.
At Franklin Falls and Harrietstown they heed the joyful call.
And all the way from Silver Lake to Wardner's Rainbow Hall.

The sleigh bells' merry ting-a-ling the evening stillness break,
Upon this night all highways lead to Wardner's Rainbow Lake.
To reach this spot of wondrous fame they ride, they walk and crawl
From miles about they gather here at Wardner's Rainbow Hall,

They come from halfway from New York, they come from far and near,
The talk about this grand affair is all the people hear,
And those who stay away this night with envy sure will bawl
To think they missed the New Years hop at Wardner's Rainbow Hall.

Vene Pay he saws the violin, while Flanders toots the horn
To keep them dancing to the strains until the early morn
Stand on your feet, pull down your vest, salute your partners all
It's lot of fun we always have at Wardner's Rainbow Hall.

Here's Pete O'Malley, just the boy to superintend the floor.
And if they get unruly he will sling them through the door.
"Grand right and left" with nimble feet and "swing your partners all!"
They shave her down and shave her up to Wardner's Rainbow Hall.

Now Warren Flanders calls it off to keep them on the run,
While Captain Pierce with graceful glides contributes to the fun
Both Henry Smith and Burt McCann are swept against the wall
By all this multitude of sports at Wardner's Rainbow Hall.

Here Guard Maloney leads the pace with Jim O'Malley's aid,
To double shuffle 'round the room they're really not afraid.
Duck Derby dances in a race with big Will Pay so tall,
And Robert Coolon referees at Wardner's Rainbow Hall.

They dance the old year off the earth and dance the new year in,
Until from hunger every one becomes extremely thin.
The boys consume some juice of rye, then hasten to partake
Of tempting foods they serve this night at Wardner's Rainbow Lake.

For such a wholesome midnight feast they simply have to fall,
Then hurry back some more to dance in Wardner's Rainbow Hall
The Devil's Dream, the Irish Trot and Monkey Musk they play
To twenty dozen boys and girls until the break of day.

When morning comes this merry crowd the journey homeward take
With pleasant thoughts of Rainbow Hall and Wardner's Rainbow Lake.