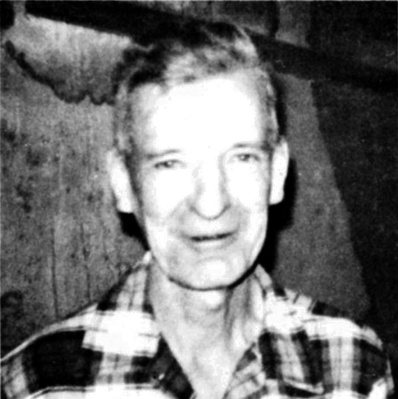 Ralph Morrow was a guideboat builder. He was a resident of Saranac Lake most of his life. He worked at Crescent Bay Marina, later worked building guideboats for Carl Hathaway. In 1970, he started Morrow's Boat Shop. With Carl Hathaway, he taught a course in guideboat building for North Country Community College in the 1980s. The Adirondack Council granted him the Distinguished Achievement Award for his efforts to pass the traditional craft along to a new generation of boat builders.

He lived at 127 Duprey Street. He served in the Army in World War II. He is buried in Pine Ridge Cemetery.

According to Phil Gallos's research card files, Morrow lived at 46 1/2 Duprey Street; or perhaps this is the address of his boatshop? Phil's sources are: Pamphlet: "Guideboat Show," Saranac Lake, NY, 6/29-7/5/1983; and Maitland DeSormo, Summers on the Saranacs, p. 133.

Ralph was a resident of Saranac Lake for most of his life. Many years ago he worked at Crescent Bay Marina. He later worked for Carl Hathaway building Adirondack guide boats. He owned and operated Morrow's Boat Shop since 1970.

He was a veteran of the United States Army, and served during World War II in the Headquarters Company, 2nd Battalion, 63rd Infantry Division.

He is survived by one daughter Margaret Magyar of Orlando, Fla.; five grandchildren; five greatgrandchildren; and several nieces' and nephews.

He was predeceased by his wife on June 18, 1992; his parents; and his seven brothers and sisters.

The Adirondack Guideboat Program at North Country Community College's Center for Humanities and Adirondack Studies will be the subject of a documentary film on TV-Channel 57, Wednesday, Dec. 9 at 9 p.m.

The documentary film, eight months in the making, research and editing, will document the guideboat program in the fall of 1980 and spring of 1981. Footage will include Carl Hathaway's shop where he and Ralph Morrow conducted two classes with 12 apprentices in each class.

In addition, the film will show two completed guideboats and the launching party on a nearby lake.

The guideboat program is in its second year with two classes meeting at Hathaway's.