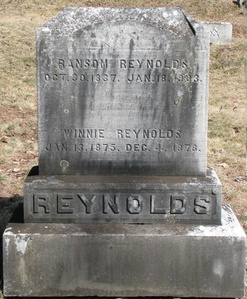 Married: Josephine A. Lynch a daughter of John and Maria Lynch.

Ransom Reynolds was a notable guide in the early years of Saranac Lake. He was a son of Newell Reynolds, one of the earliest residents of the village. In 1886, he sued his siblings to force a division or sale of his father's farm. 1 In the late 1800s, Ransom and his brother Reuben Reynolds owned much of the center of the village.