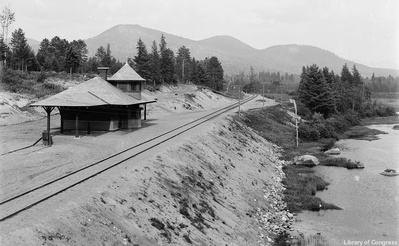 Ray Brook Railroad Station, 1905-20 Ray Brook is a small hamlet three miles southeast of Saranac Lake, in the Town of North Elba, Essex County, New York; it lies within the Saranac Lake Central School District. Daniel Ray, one of the earliest of North Elba's pioneer settlers, arrived in 17951 and settled near a stream ever afterwards to be called Ray Brook. Many of the nascent North Elba settlers abandoned their efforts to farm in 1816, "the year without a summer," but as to the fate of Daniel Ray who was by then over 60 years old no one can say. Between 1840 and 1860, Daniel Ames came to North Elba and settled his family in the Ray Brook area, where he farmed and lumbered, building the handsome Greek Revival farmhouse on the Old Military Road, and probably also building the dam at Ames Mill. Later much of the land in Ray Brook was owned by the Ames and Cameron families. 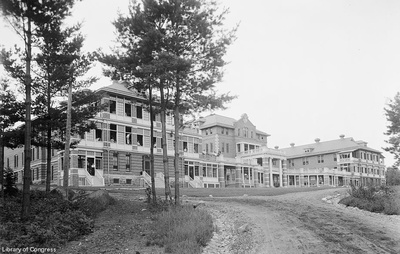 The hamlet was the site of the New York State Hospital for Incipient Tuberculosis at Ray Brook, which admitted its first patient on July 1, 1904. Its size transformed the rural hamlet, so small it seems never to have had a church, into a community dominated by that one large institution. It brought new jobs and new people, who needed services themselves. The dam of the old Ames Mill became the site of the power plant for the hospital. A new Ray Brook schoolhouse, now a residence, was built to accommodate the additional children, apparently the last one-room schoolhouse erected in the town. As late as 1930, the Ray Brook Railroad Station was rebuilt (after a 1928 fire destroyed the previous station) within easy walking distance of the hospital. The railroad station, which was also used as a post office, closed when the New York Central discontinued service in the 1960s. 2 With the advent of antibiotic treatment for TB, the state began to downsize the hospital beginning in 1965 and, despite local efforts to keep it open, it was closed in June 1971. After use as a drug rehabilitation facility, the site became Camp Adirondack, a minimum-security New York State prison. This was later changed to medium-security and named the New York State Adirondack Correctional Facility.

The Federal Correctional Institution at Ray Brook is a separate facility, originally built with federal prison funds for temporary use as athletes housing for the 1980 Olympic Winter Games, as concern for security was high after Israeli athletes were killed by terrorists at the Munich games held previously, but planned for prison use following the games. 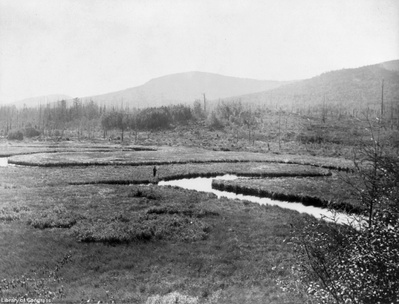 The Adirondack Park Agency (APA) has its headquarters in Ray Brook, as does Region Five of the New York State Department of Environmental Conservation (DEC) and Troop B of the New York State Police; these state agencies occupy the site of a once-popular resort hotel. 3. The state also operates the Meadowbrook campground at Ray Brook.

According to Howard Riley, there were six bars in Ray Brook in 1948: "The Birches was then owned by Ralph DeMassi, (later owned by Mose LaFountain, the elder, and after that by son, Jimmy); the Pioneer Village; the Evergreen Tea Room now Tail o' the Pup; a bar and restaurant next to that owned by the Joffe [sic: Yoffe. See the following paragraph.] family, where the Ford Agency is now and across the street, was the Brown Bear Bar; owned by the Duprey family and that is how Phil Duprey, the Olympic bobsledder got his nickname, Brown Bear Duprey. Fitzgerald's was a more fancy restaurant and bar and was located in that beautiful house now owned by Joe and Maria Hackett next to the golf course." 4

"In my story about the Ray Brook bars I had the name wrong - it was the Jacob Yoffe family, not Joffe, who had a bar and restaurant near where the Ford garage is located today...on the Placid side of Tail O' the Pup. None of my older brothers or sisters can remember the name of the restaurant, and yes, there were cabins also... my brother Ray, delivered milk there when we lived at the Oseetah Dairy. They had a daughter, Carol, who graduated from SLHS sometime in the 1940's." Howard Riley, email, 4/26/13.

Tonight at the local ball park the newly formed Ray Brook Ramblers play host to the visiting Brighton Blues in a return match between the two teams. In the first meeting of the year for the Ramblers they were handed a defeat by the Blues 6-4, but have since men won their first game of the season, over the Bloomingdale Firemen 6-2, which was last Friday evening.

You will see such ball players on the Ramblers as Danny McKillip, Bruce Dudley, Jack Smith, Bruce Elmore, Jackie Knight, Bobby Griffin, Tooey Myers, Bugs Pratt, mainstay of the original Ray Brook Ramblers, and other well know ball players, all coached by Duke Benz famed leader of over 200 athletic programs throughout the country.

Ed Duprey will be the umpire and another umpire will also be on hand to call the plays on the base paths.

Thursday night and not tonight as previously stated, because of a change in scheduling, the Ray Brook Ramblers will play the Saranac Lake Chiefs in a game which will be of interest to all of this community.

TWO TUPPER BOYS WILL BE AMONG 40 ATTENDING AUG. 14-18 SESSION OF NEW CONSERVATION CAMP

The new Adirondack Boys' Camp which the state Conservation Department will open on August 6th, and to which the Tupper Lake Rod and Gun Club has arranged to send two local boys, stands on the site of the Ray Brook House, between Saranac Lake and Lake Placid.

The original Ray Brook House, where President Grover Cleveland was a visitor back in the '90s, was destroyed by fire in 1907 and the present structure was erected shortly thereafter and operated for years as a health resort, and later a tourist house.

Two one-week camp sessions are planned there this season, August 6-12 and August 13-19. Maurice Godin and Charles Pisanchin will attend the Aug. 13-19 session under sponsorship of the local Rod and Gun Club.

From th Forty Adirondack boys, from 13 to 16 years of age, will attend each session, District Game Manager Greenleaf Chase announces. They are sponsored by various sportsmen's clubs and other service organizations within the nine counties, Essex, Franklin, St Lawrence, Clinton, Warren, Lewis, Herkimer, Jefferson and Hamilton. The sponsor fee is $25 per lad per session.

Oliver Wallace, Instructor of forestry at Paul Smiths College and the camp director, will select the three camp counsellors from the college. The camp doctor selected is an interne in Albany. A cook and cook's helper will be employed but they will not re side on the premises.

Conservation Department work men are damming the little Ray Brook Pond on the old road across the way. The site will be cleared and a sand beach made. A log lean-to is being built on the land in back of the camp, which will also accommodate the rifle range. Each evening one group, consisting of eight boys, will sup at the lean-to, camp for the night, and return to classes after breakfast.

Five tourist cabin businesses and several support services for auto tourists are located in close proximity to one another along Route 86 in the unincorporated hamlet of Ray Brook. These businesses occur in two clusters, on the edges of the hamlet center. From east to west, they are the Sherwood Forest Motor Inn and the Duprey family's Log Haven on the north side of the road and the Evergreen Camps (formerly "Cal's") on the south side. The western edge of the hamlet is marked by Moreno's Cottages on the old Ray Brook Road, just off New York Route 86 to the south, and Pioneer Village on the north side of Route 86.