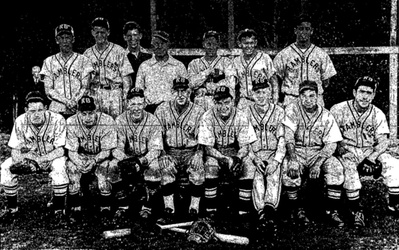 Larry Russ and Brown were the opposing moundsmen with each yielding nine hits in a fast, tight game. Bert Tormey's single, his steal of second and R. Stephenson's safety gave the Firemen their initial counter in the opening inning.

Watson Clark smacked a long triple in the next frame and scored on an infield error to register the Ramblers' first tally. Larry Russ, who fanned nine during the game, led off the top of the third with a single and crossed the rubber on successive blows by Sullivan and Jim Duprey to put the visitors ahead, 2-1. Bloomingdale tied it at 2-2 in the bottom of the third as R. Stephenson was given a lift on a Rambler infield error, stole second and dented the plate on two passed balls.

The Firemen staged a 3-run blast in the fifth frame which eventually sewed up the game. Singles by Tormey, Benware and Sprague and a walk to Benny Rieck were the main factors in the 3 run splurge. These would have been avoided if Russ and Jim Duprey had not collided on an infield pop-up.

In the sixth inning, the Ramblers put across their third and final marker on singles by Bush and Sullivan aided by a firemen infield bobble.

The young, newly formed Saranac Lake Ramblers displayed the hustle and snap of the former Ray Brook Ramblers and copped their first game of 1953 by defeating the Bloomingdale Firemen, 7-2, in a twilight six-inning affair on Youth Commission Field in Bloomingdale last night.

The local nine, co-managed by Rene Gendron and Wally Gay, consists largely of high school and college diamond hustlers who took advantage of numerous Firemen miscues to overtake a first inning 2-0 margin of the home combine.

Al Bouton started on the hill for the Ramblers and after he got by the 2-run first, he improved steadily before stepping aside for Bug Pratt, who toiled the fifth and sixth without giving up a hit.

Bloomingdale with a jumbled-up lineup that contained only 6 regulars couldn't put a halt to Saranac Lake's rallies in the second, third and fifth. Watson Clark toed the slab for the losers and with a little better support the final count would have been closer but the run-making frames for the spirit-happy Ramblers totaled 2, 1 and 4 respectively.

The only extra-base blow of the visiting victors was a two-bagger to the right field fence in the third by shortstop Bob Daunais which highlighted the Rambler hitting.

Excited and proud over their first conquest, the players, whose ages range from 16-23, and managers hope to schedule more games with Bloomingdale, and some with Plattsburg, Peasleeville, Malone and Peru. They also hope that an inter-city series with the Chiefs can be arranged.