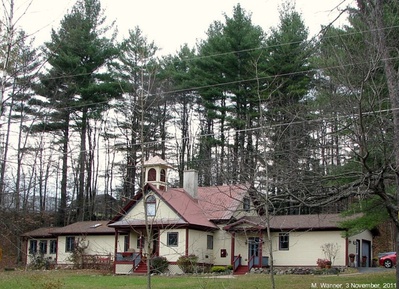 Ray Brook school house The Ray Brook Road, designated as County Highway 32, presently starts at the New York State Police Troop B headquarters on New York Route 86 IN Ray Brook, and runs in a loop one and a half miles from south past the Ray Brook Federal Correctional Institution and the Adirondack Correctional Facility back to Route 86. It also passes Pendergast Road, and the sites of Ames Mill and the Ray Brook Railroad Station.

Letter from Mary MacKenzie, Historian of the Village of Lake Placid and Town of North Elba, on October 10, 1991, to Mary Hotaling. 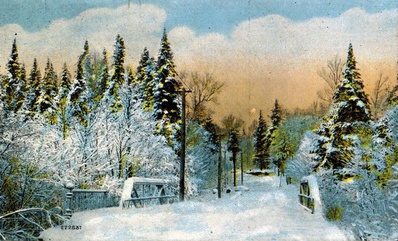 Postcard captioned "The Old Road to Ray Brook."
Courtesy of Noreen Oslander  "After the Ameses came, the Old Ray Brook Road was put in opposite the Conservation building [location of today's State Police headquarters]. It only went down to the Ames mill on Ray Brook. Then when the Ray Brook San was built in 1904, the road was extended to go around the hospital grounds as it does today and at that time was extended also to go directly into Saranac Lake as of today. Up to that time the only road from Ray Brook to Saranac was the McKenzie Pond road. Up until 1934 the Old Ray Brook Road was the main road from Ray Brook to Saranac. In 1934 the entire road from Lake Placid to Saranac was reconstructed, and it was at that time that the cut-off from the Conservation building to White Birches was surveyed and put in place, eliminating Old Ray Brook Road as the main thoroughfare. At that time also a new entrance to the McKenzie Pond road was put in, as it exists today. From 1810 on, the McKenzie Pond road used to start veering off to the north immediately past the Conservation building, swinging off to the rear of Pioneer cabins and the State Troopers building. When the new entrance was put in in 1934, the MacKenzie Pond road certainly had to be relocated for a distance of at least half a mile, maybe more. This was a rather significant relocation of the 1810 road. The Lake Placid News reported that many, many curves were eliminated in 1934 over the whole road. Also, in 1913 the State macadamized the whole Lake Placid-Saranac Lake road and probably made minor alterations at that time also."