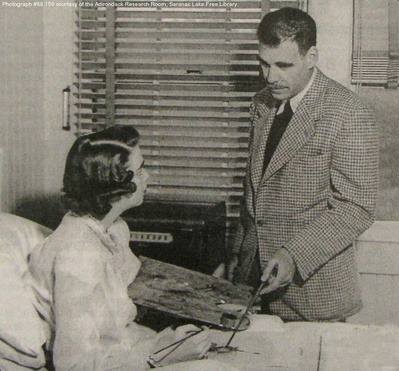 Raymond Budd Ridabock was an internationally known, award winning painter who lived, painted and taught in Saranac Lake until 1955. His family owned Ridabock & Company, a fancy dress uniform company in Brooklyn, established in 1849, and later engaged in banking in Stamford, Connecticut. He graduated from the Kings School in Stamford and attended Williams College. He was a devoted outdoorsman, enjoying water sports especially swimming and boating, and an outstanding collegiate athlete. After college he began working in the family banking business, commuting daily from Stamford to New York City. The course of his life was changed by the diagnosis of tuberculosis in 1927. From 1927 through 1940, he made repeated trips to Saranac Lake for long stretches of recovery. 1 When he was well enough, he returned to Stamford and his work in banking. However, he relapsed often and soon his nearly full-time effort at recovery severely limited his working. 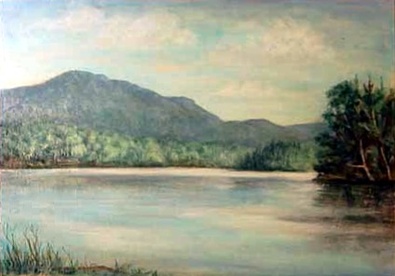 An Adirondack landscape by Ridabock. www.liveauctioneers.comWhile recuperating in Saranac Lake, he had time for introspection and solitude and his curious nature made him open to new ideas and he studied architecture by correspondence course. Amy Jones, a WPA muralist employed by the Saranac Lake Study and Craft Guild, introduced him to watercolor painting and found him an enthusiastic student.2 His first show was held at the Adirondack Piano Store on Broadway in the early 1940s. He also became a teacher in the Saranac Lake Study and Craft Guild. Mr. Ridabock's home and studio were located at 31 Helen St (pre-911 address) on Helen Hill. He served as president of the Saranac Lake Art League in 1943-44. In the 1950s he studied with Xavier Gonzalez in Wellfleet, Massachusetts. Gonzalez encouraged him to pursue alternate avenues, such as abstraction, and to pursue new opportunities in other styles and mediums.3 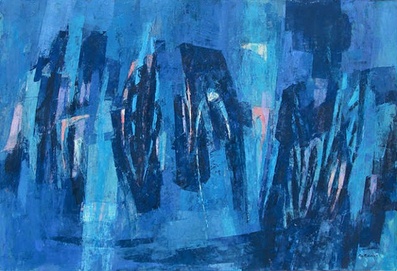 In the 1950s, Ridabock flourished as an artist, receiving many accolades. In 1953 one of his paintings was selected for an exhibition held at the Berlin Academy of Art in Germany. His painting "Fisherman's Delight", a casein and watercolor seaside scene, was one of thirty four selected from a New York City competition held at the Caravan Gallery.4 In April 1955 his work took first place at the Museum of Fine Arts Show in Springfield, Massachusetts. "Fisherman's Warning" was described as "moderately abstract". Ray Ridabock's art was eclectic and experimental: he painted traditional landscapes as well as impressionistic paintings. He exhibited at fifty national shows and won prizes in New York City; Newark, New Jersey; Utica, New York; and Wilmington, Delaware. His work was seen throughout the United States in Maryland, Alabama, and Miami, Florida. In 1958 at the National Academy Galleries in New York City he received his most prestigious award, the Medal of Honor of Audubon Artists, for his painting "Out of the Blue."5

Ray Ridabock was similar to many patients who came to Saranac Lake for the cure: he cured, he a built new life and a new career and contributed to the community. Unfortunately, according to the Adirondack Daily Enterprise, "the strange antics of the State Bureaucracy" resulted in the dismantling of the Guild's educational courses, and Ridabock no longer had a steady teaching job. Although he sold some of his artwork, Saranac Lake was too far from the major art markets. His wife, Nancy, had her own employment losses. In 1954, when the Trudeau Sanatorium closed she lost her job.6 In 1955 Ridabock and his wife left Saranac Lake for Sandy Hook, Connecticut. The Saranac Lake Free Library owns three of his paintings.

2010-05-29 08:03:22   The Saranac Lake Free Library has some of his paintings, and they might have more information on him. If you're not local you could try emailing them at [email protected] —Mwanner