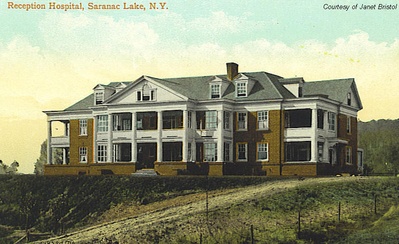 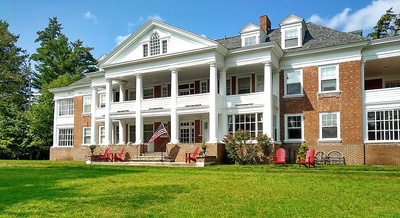 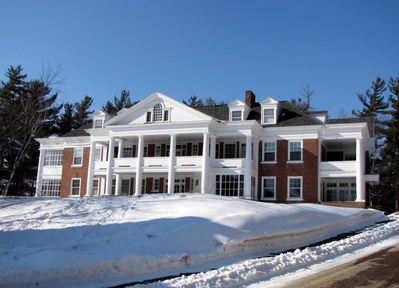 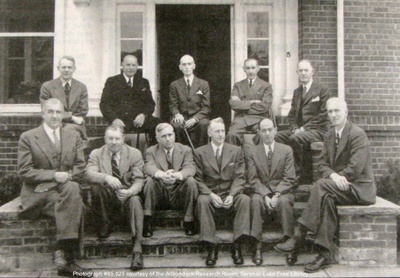 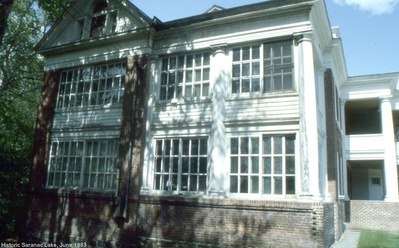 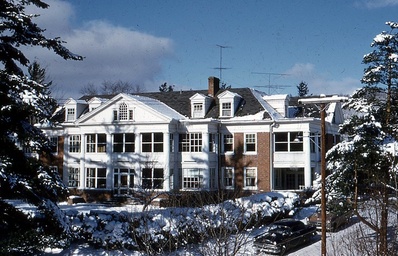 The Reception Hospital, also known as the Prescott House, opened in 1905, was originally intended as a clearing house for seriously ill patients, sending them on to other sanatoria as their conditions and/or finances permitted, hence the name "Reception Hospital." The need for beds for patients too ill for admittance to the Adirondack Cottage Sanitarium, which took only incipient cases, and too poor for private facilities prompted Mary Prescott, at the urging of Dr. E. L. Trudeau, to open the first small nursing cottage on Front Street. The need for more beds prompted Miss Prescott to build the Reception Hospital; she personally subsidized the operating expenses of the hospital to allow for the care of poor patients. It was designed by the new architectural firm of Scopes and Feustmann, who entered and won a competition to design it. The Colonial Revival-style Reception Hospital was located at the north end of Franklin Avenue. 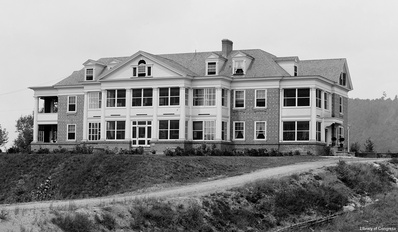 Reception Hospital, c. 1905, Detroit PublishingOver time, conditions changed, and it began taking patients for longer periods, and treating fewer per year; in 1943 its name was changed to Prescott House, in honor of its benefactor. By 1949, a shortage of funds led to the closing of the hospital, and the trustees sought another use for the building. The Saranac Lake Study and Craft Guild was in need of additional space, and on March 27, 1950, the building and all other assets of the Hospital were given to the Guild.

The Guild maintained a center there for several years, offering business education, academic and technical subjects, including X-ray technician training in addition to the traditional arts and crafts courses. However, the development of effective antibiotic treatments for tuberculosis led to a gradual reduction in the number of patients interested in the Guild's offerings, and courses were dropped until only the X-ray school was left. On October 9, 1968, Prescott House was given to the newly formed North Country Community College; the X-ray program became part of the curriculum. However, the college decided that, due to the building's need of maintenance and its distance from the campus, it would put the property up for public auction.

On January 4, 1969, the building was acquired by Chester Fobare and Richard Yorkey, who carried out extensive repairs. The building became a girls' dormitory for NCCC for a time.

In 2017, Debra Thuet purchased Prescott House and turned it into a short and long-term lodging facility and restored the integrity of the building .

The annual report of Dr. E. L. Trudeau concerning the work done at the Adirondack Sanitarium at Saranac Lake during the year ended Oct. 31, 1899, states that it treated 254 patients during the year, of whom 48 were discharged apparently cured, 47 with disease arrested, 50 improved and 18 unimproved. There were at the close of the year 89 patients still under treatment in the institution. While it is the rule of the sanitarium to accept as patients only those in the incipient state of the disease, the fact is that of the 163 discharged patients no less than 119 were “advanced” or “far advanced” so that the possibilities of absolute cure for tuberculous people seeking treatment in time are seen to be vastly greater than is indicated by the figures quoted. Dr. Trudeau refers to the need the institution has for greater funds, and says:

The increase of applicants has accentuated a great need in our work— i. e., a reception hospital somewhere in Saranac Lake village for the more advanced cases who cannot be taken at the sanitarium. During the entire year, but especially during the summer months, scores of invalids in the last stages of the disease come to Saranac Lake village, either with scanty purses or wholly without funds, full of the new hope which the prospect of admission to the institute has brought them, only to meet the bitter disappointment of finding they cannot be taken in because their cases are beyond the reach of treatment. Too sick often to care for themselves, without money and without friends, their position is most pitiable, and they seek here, often in vain, a place to await the inevitable end. A separate hospital building that would afford a shelter to these stranded and helpless human beings would indeed be a fitting complement to the work of restoration attempted at the sanitarium, and I cannot but think that in the near future the same generosity which has made possible the growth and development of our institution will furnish as well a shelter for those who are beyond the reach of its treatment.

The cottage had an "annex," a tent across the street. It was the discomfort of approaching cold weather to the two patients housed there as well as increasing demands for its services which determined the first move of Reception Hospital.

Miss Prescott leased 40 Shepard Avenue, and at the new site ten patients and later fourteen were accommodated. It was in 1905 that Miss Prescott built Reception Hospital on its present location at 5 Franklin Avenue. Funds were raised through appeals to her friends, and to the community, supplemented from her own purse. The institution has 20 beds and, in good times or bad, has filled a vital need in the village. It is not surprising that patients at Reception have a deep-rooted belief in the precept of its founder and her physician [illegible] tuberculosis.

As soon as their health permits, and often they are very ill on admittance, many are eager to find occupation for the mind and the hand.

Among the patients there now, Howard Neville and William Sabo are taking book-keeping courses at the Guild. Edward O'Reilly is studying mathematics and physics. Milton Groh, a prep school boy, is planning to take English courses.

Miss Betty Baker is drawing. Mrs. Mabelle Gurney is enrolled in the theory and harmony of music course. Mrs. Earle Duncan and Miss Nancy Hough are knitting for the Bundles for Britain organization. Others are simply waiting for the doctor to say the good word that they're well enough to take courses at the Guild in which they're interested, or to pursue their own hobbies.

They are proof that "an active interest of some kind" is the same aid today in recovering from tuberculosis that it was for Miss Mary R. Prescott in 1901.

Dr. Leonard J. Bristol, radiologist of the Saranac Lake Rehabilit ation Guild, last night presented the members of Class 16, graduating unit of the Guild General X-ray Technicians course, that the job of the X-ray technician was much more than that of taking pictures.

Addressing the group in ceremonies at Prescott House, Dr. Bristol urged the graduates to give thought to the work that they must do and to exercise the human approach in their relationship with patients. Patients, he said, are generally an ill and worried lot which demands the utmost in kindness and understanding on the part of the X-ray technicians.

A dinner at the Elks club preceded the graduation exercises.

The graduates have completed 13 weeks of study at Prescott House and 35 weeks of training at cooperative hospitals in northern New York.

Following graduation, Tobin will associate with the St. Joseph Hospital at Syracuse; Miss Garey will take a position with Highland Hospital at Rochester while Mortland will join the staff of the Acme Silver company at Washington, D. C. Abbot and Struzzeri have several positions offered but have made no decision in the matter.

Prescott House, long a haven for tubercular patients, has been bought by Chet Fobare and Dick Yorkey, and they have already begun the enormous task of repairing and refurbishing. Fourteen windows were installed over the weekend being the first of many necessary jobs. Student occupancy is not certain at this time as there is a great deal of plumbing to be done such as new bathrooms and showers; additional closets, too. And there will be recreational areas on both the first and second floors. The new owners, doing most of the work themselves, plan to do the work well so there will be no necessity for redoing it !next year. Good luck, Chet and Dick, Many are eager to see the grand old house on the hill brought back to its former beauty and dignity, and nothing could be more fitting than a dormitory for college girls.

For 44 years a handsome brick neo-colonial building at 5 Franklin Ave., designed by Saranac Lake architects Scopes and Feustmann, welcomed and cared for Tuberculosis patients. Erected in 1905, it was the outgrowth of a small nursing cottage on Front Street which has been opened at the request of Dr. Edward L. Trudeau with funds provided by one of his former patients, Mary R. Prescott.

Its purpose was to serve as a semi-charitable clearning house for the seriously ill, sending them on to other sanatoria or nursing cottages in the area as their health and circumstances permitted. Thus it became known as the Reception Hospital.

But with changing conditions the term of stay was greatly lengthened and the number of patients treated each year greatly reduced, so in 1943 its name was officially changed to Prescott House in honor of its founder and benefactress.

By 1949, according to a history written by Miss Prescott, "shortage of funds to meet increased costs, shortage of nurses and other shortages compelled closing the hospital" and the trustees sought an appropriate use for the beautiful property on Helen Hill overlooking the Saranac River and Mt. Baker.

Coincidentally another unique Saranac Lake institution was seeking expanded quarters. The Saranac Lake Study and Craft Guild had been offering facilities and instructions for the rehabilitation of tubercular patients since 1936. Starting at the bedside and following through medical discharge and a return to employment, Guild counselors and instructors were available to all patients in the public and private sanatoria in the 150-mile square area around Saranac Lake.

With new understanding of the importance of rehabilitation as an aid to recovery and an assurance against relapse, the guild quarters at 100 Main St. became critically inadequate. On March 27, 1950, on the recommendation of Miss Prescott, the board of trustees of Prescott House designated the Saranac Lake Study and Craft Guild the recipient of all real estate and personal property of Prescott House, along with an unspecified amount of cash assets.

For a number of years the guild maintained a lively center there, offering a full schedule of courses in arts and crafts, business education, academic and technical subjects, including an outstanding training program for X-Ray technicians.

But advances in the treatment of tuberculosis signalled, if not an immediate end of the disease, at least an end to the need for extended care in sanatoria or nursing cottages. Gradually the number of patients curing in the area declined, and courses at the Guild were dropped until only the X-Ray school remained.

On Oct. 9, 1968, Prescott House was given to North Country Community College where an associate degree in X-Ray Technology became a part of the curriculum. However since Prescott House was at some distance from the main campus and in great need of repair, the college put the building up for public bid.

On Jan. 4, 1969, Chester Fobare and Richard Yorkey took possession. After extensive repairs and renovation, the doors of Prescott House opened once again, this time as a girls' dormitory for North Country Community College students. It is still operating in that capacity, loved and cherished today as in the past by all who reside there.

The research on this building was completed by Dorothy Fobare, a member of Historic Saranac Lake. If you have any additional information of its history or structure, especially the name of the builder, please pass it on to her or the Saranac Lake Free Library.