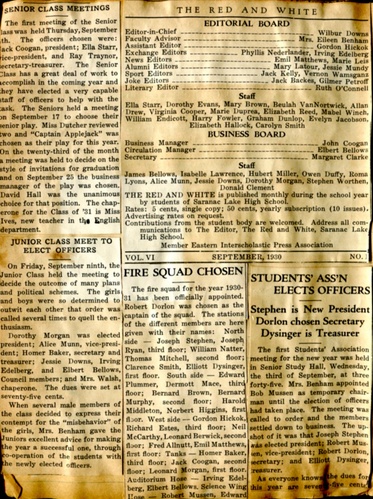 Clippings from the 1930 Red and White from a scrapbook kept by John G. Coogan)

Red and White is the student newspaper of Saranac Lake High School, first published in 1925.

The rip-roaring twenties produced some pretty wild journalism on the high school level and, in the Red and White edition of June, 1929 we have uncovered a trove of invaluable information which would make the villagers mentioned therein blanch, regurgitate and perhaps even suffer an attack of the vapors.

The reason they would undergo violent physical and mental stress is that most of them have since become sedate and solid citizens.

The vapors was a hallmark of the tight corset era when girls wanted their waists pulled into a bottleneck and held there by the adroit application of string laces and whalebone stays.

Girls would often faint or have dizzy spells from an attack of the vapors showing the males they were tender ethereal beings . . . . butterflies flitting from rosebush to daffodil in the Garden of Eden

It wouldn't be overly tactful on our part to reveal all the shenanigans of these cobwebbed Casanovas circa 1929 but it shows the "vigah" of an age when bathtub gin and the Stutz Bearcat were the epitome of the blase. A student without a coonskin coat in winter and a yellow slicker (summer) cartooned and lettered with campus queens' names was simply out of the social swim entirely.

When this issue of the Red and White was printed they still had barrel rushes and probably many a romance flowered and matured on the old foot bridge in back of the town hall. The big men on campus wore maroon varsity jackets and if you weren't out for sports you became a target for the brawny gridiron behemoths or perhaps received an apt slap from the crusading staff of the rambunctious Red and White.

Lettermen hung out in front of Bill Herron's Tobacco emporium at 24 Broadway on soft summer evenings and girls ambled by hoping to get whistled at . . . they were rarely disappointed.

The Bullshevik Number as it is referred to in the flag was perhaps a trifle left wing in its approach to whittling students and teachers down to size. Today the issue would never clear censorship and would be drained of blood and venom before reaching eye-level.

In those days the students were bigger and often older than the faculty and somewhat indifferent to scholastic accomplishments compared with today's mortarboard rush to ivy halls of advanced learning.

Those around today who had a hand in putting out the virile and vitriolic periodicals of 1929 are few and far between but scattered remnants of the vanishing american remain yet above sod.

With apparent glee and often animal delight they would badger the unfortunates who were not accepted in the rebel ranks. They made fun of everyone and everything including themselves. No romance was sacred from the acid pens of the editorial department of the Red and White.

They tell me the day the Red and White came out back in prohibition days it was the next thing to a Roman Holiday! I should have this rare issue reprinted and copies mailed out to those still living here abouts. Those still present but not functioning in the traditions of the June 1929 issue.

I should enclose a letter of blackmail with each copy and for the sum of $1.00 I would see that nothing was ever said about the whole darn thing.

Historic Saranac Lake does not have any copies of the Red and White, the old high school student newspaper, but the Adirondack Collection of the Saranac Lake Free Library does have a few copies, cataloged as <S243715r news>. Their complete holdings as of May 21, 2000, are listed below: