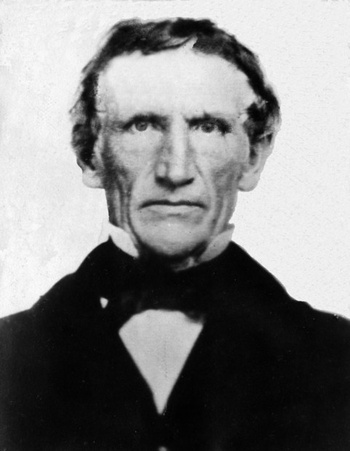 Reverend Samuel Smith, courtesy of the Trudeau InstituteBorn: 1804 in New York State, or possibly in England

Samuel Smith, known as "Preacher Smith," was listed in the 1860 census as a Farmer, the head of his household, age 56, born in New York. He was living with with his wife, Eliza Richards, age 53; their son Robert, age 27; Robert's wife, Eleanor, age 23; two Laborers and a Servant. By 1870 Samuel Smith was 66, his wife was gone, and he was a Surveyor, living in the household of his son, Robert and his wife, with four children.

Helen Smith, out on the Trudeau Road (formerly named Smith Road), very kindly calls to tell me that the Samuel Smith I inquired about yesterday was her great-grandfather, who came here from Johnsburg (Warren County) and was the first minister of the Methodist Church.

In the year 1839, Samuel Smith, who was 35 that year, bought a one-mile square of land located just to the northeast of the village of Saranac Lake. This mile-square of land was bordered on the north by the St. Armand Town line. The western border climbed to the top of Mount Pisgah, and on over its southern slope to end in a spot not too far from the end of what is now Park Avenue, in Saranac Lake. From the top of Pisgah Mountain, the land sloped down and down to the bottom of the valley for its eastern border which reached out in both directions to corner with the ends of the north and southern borders.

Samuel Smith came to this area from Johnsburgh, Warren County, apparently looking for a new place in which to locate home. When he discovered this bit of land with its mountain top, and the valley at its foot he must have recognized it as his own "Promised Land." Mr. Smith was a religious man and as he looked out from the mountain top to the valley below, he was reminded of the Mount Pisgah mentioned in the Bible. It was up that Mount Pisgah to the top of one of its peaks — Nebo — that God, many centuries before, had called the prophet Moses, that he might view the valley before him where lay the Jordan River in the foreground and beyond it the land of Canaan, (the Promised Land) to which the children of Israel were journeying.

Back in 1839, a large portion of the land in this North Country was State owned and most of it was quite heavily forested. But it happened that this particular spot which appealed to Samuel had at least one private owner. He had cleared a small portion of the land and had started to put up a house. Smith [found] the owner quite willing [to sell] the whole mile-square [illegible] of 640 acres. Thus [illegible] the possessor of [illegible] "Promised Land,' and [illegible] lived until his death many years later. Soon after his purchase he went to work on the house and soon had a satisfactory shelter for himself and [his] small family.

Although Samuel Smith had to do more or less of farming and woodcutting to care for his family of wife and two sons, he was appointed an elder in the Methodist Episcopal Church of the Troy Conference. The appointment was made by Bishop Edmund S. Janes at Keeseville on the 31st of May, 1846. He was to be a traveling preacher, or elder, to care for the spiritual needs of the people of Harrietstown, Bloomingdale, Saranac Lake and Lake Placid.

The Smiths had two sons but only one of them, Robert, lived to grow to adulthood, as his brother, John, ( Edward—not John) died in a drowning accident when he was 15 years old.

Today we continue our story of the mile-square of land which Samuel Smith purchased in 1839. Just when the very first portion of that section was sold is not certain to this writer, but among the very first were 16 acres in the southeast corner.

That piece of property was sold in 1883 to the Adirondack guides who had cared for, and hunted with, Dr. E. L. Trudeau, during the years of his fight for health in this North Country. They knew he had dreams of establishing a sanitarium for tubercular patients somewhere in this portion of the Adirondack Mountains. They also knew that he had a favorite spot where he loved to sit for hours at a time as he gazed about him and thought much about life and death and God. When the guides discovered where that place was, and found that he considered it the ideal spot for a sanitarium, they "chipped in" and bought 16 acres of "Preacher Smith's Pasture." The price was $25 an acre. How pleased they were to present the deed to the doctor whom they had learned to love so much!

It was on that land that Dr. Trudeau established his "Adirondack Cottage Sanitarium" which later became known as the "Trudeau Sanitarium," or more often just plain "Trudeau." Today that property is owned by the American Management Association along with other land that had become part of Trudeau.

In his autobiography, Dr. Trudeau wrote of this land as being "Most unattractive and rugged in appearance" and "it was covered with huge boulders and looked more like a pasture for goats than a building site." But the boulders were found very useful as they furnished plenty of stone for the buildings that were soon to be built.

The Pisgah Ski Center is on land which was a part of the original mile square section.

After Samuel Smith's death his son, Robert, fell heir to the home place, and his son after him. Through the years many different pieces and sizes of lots have been sold from the original 640-acre section until only ten or twelve acres remain to serve as "home acres" for the Smith farm.

The Smith house stands on the eastern slope of Mount Pisgah and from it one may look out over the beautiful and extensive valley below, and to the mountains beyond the valley. The original small house still stands as a part of an attractive and commodious residence. Some years ago when wiring for electricity it was found that one secret of the first little home's sturdiness was due, at least in part, to the fact that a layer of two-inch planks had been used between the outer and inner walls for want of other insulation. And so the little old home does its share toward making a beloved home for the Misses Marjorie and Helen Smith who are great granddaughters of Samuel Smith.

Information about the Smith's from Miss Helen Smith; that of Dr. E. L. Trudeau came from his autobiography and was used by permission of Dr. F. B. Trudeau.

Rev. Smith and Eliza and two children are buried at Harrietstown Cemetery. Both stones are badly damaged.

1. A transcription of the Harrietstsown cemetery stones give the year of death as 1881, but the photograph of the stone appears to show a date of 1870, a year which agrees with research by descendant James Richards.