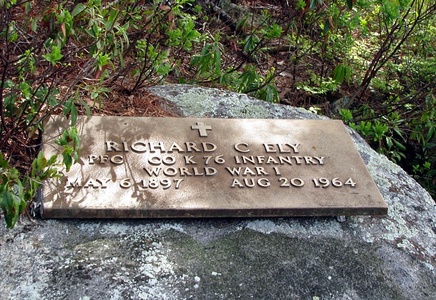 Richard C. Ely was a World War I Veteran and a guide.

Richard C. Ely, of Saranac Lake, an Adirondack guide, died at 10:30 yesterday morning at Sunmount Hospital where he had been a patient since July 5.

Mr. Ely was born in Belmont on May 8, 1897, a son of Leonard W. and Esther Charles Ely. He served in World War I as a private first class with the First Company Infantry. He was a Mason, a Shriner, and a member of the Adirondack Commandery, Knights Templar.

Mr. Ely was a friend of the late Theodore Hanmer, the guide boat builder, and under his instruction built at least three boats. He also was well known in his own right as a maker of Adirondack pack baskets and snowshoes.

Survivors are his wife, the former Milla Moe; two sons, Leonard of Saranac Lake and Peter of Watertown; ten grandchildren; and a sister, Mrs. George Zohm of Buffalo.

Friends may call at the Fortune Funeral Home through Saturday evening. A Masonic service will be held at 8 p. m. Saturday at the funeral home and a private funeral service will be held Sunday with the Rev. Peter O. W. Hill, rector of the Church of St. Luke, the Beloved Physician, officiating. Cremation will be in Troy.

Mr. Ely's family requests that in lieu of flowers, donations be made to the Cancer Society.