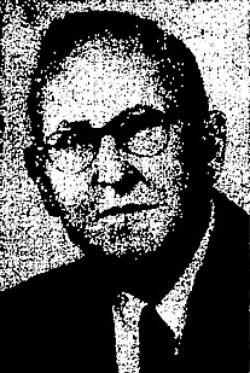 Richard R. Woodruff, who announced his retirement from the Saranac Lake Hardware on July 2, died suddenly last night while fishing at Two-Bridge Brook with an old friend, Richard Ely of this village.

Mr. Woodruff and Mr. Ely had left the Ely home around 7 p. m. to fish and had been gone less than a half hour when Mr. Woodruff was stricken and died.

Mr. Ely notified Stale Police who contacted Game Protector Richard Emperor to join them in bringing Mr. Woodruff's body out of the wooded area to the Sunset Cabins on the Harrietstown road.

Funeral services for Mr. Woodruff will be held at 3 p. m. Saturday at the Fortune Funeral Chapel. Rev. Ernest B. Mounsey will officiate There will be Elks, Odd Fellows and American Legion services tomorrow evening. The family requests that friends make donations to the Heart Fund.

Mr. Woodruff was born in Wadhams, the son of John and Ida Woodruff, and had been a life long resident of Essex County. He came to Saranac Lake as a young boy and had been associated with the former Walton and Tousley Hardware prior to the organization of the Saranac Lake Hardware 26 years ago. Mr. Woodruff had been associated with the hardware during those 26 years and had served as its manager.

He had just completed a year as president of the New York State Retail Hardware Association. He was a member of the Board of Directors of the State Association.

Surviving include his widow, Ruth Carpenter Woodruff, whom he married in 1937 in Rochester, and a sister, Mrs. Gilbert Sherman, of Wadhams.

Mr. Woodruff was a member of the American Legion, the IOOF, Rotary and the Adirondack Mountain Club.

It was once explained by a very eminent psychiatrist that the real leaders of any group are not those who are always the most articulate, who always have and express opinions on every subject, but rather the quiet ones who spend more time thinking, whose opinions are the more highly valued for being contained.

These are the people to whom the community turns for essential makers of public opinion. The quiet ones.

Such a man was Dick Woodruff. His associates have commented on his participation in the many activities in which he was interested, have described his habits at board meets. He often said little or nothing. When a controversial question came up, Dick would remain quiet. until the others had spoken. Then they would turn to him. He would have been thinking the whole question through, and his comment and opinion would be more often accepted than not.

Dick Woodruff was also an Adirondacker, not just by accident of being born in these parts of ancient Adirondack lineage. He was, and this is far more important, an Adirondacker by choice, by passion. He was not just a member of the Fish and Game Club; he was an active, functioning, dedicated member.

A good businessman he was, of course, reaching the pinnacle of success as the head of his trade association in the state. But he was a community-minded businessman, which is something plus. His attitude always was: If it's good for Saranac Lake and the Adirondacks, I’m for it and we'll go along.

Perhaps his last community act was his attendance at the annual school meeting Tuesday night. He had no children in the schools, but he was there because as a responsible citizen, he knew that the business of education is everybody's business, and therefore his business.

This is the spirit this community needs so desperately now. This is why his shockingly sudden death, a matter of days after his retirement, will be so deeply felt, not only by his friends, but by every citizen of this community where he worked and which he loved.