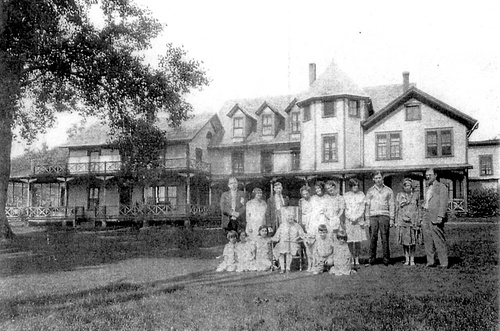 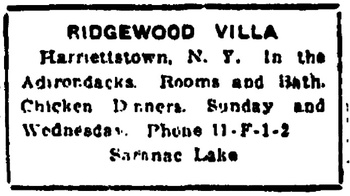 We get our kicks on Route 86

In the 1930s there was a huge hotel or tourist home known as the Ridgewood Villa, owned and operated by Mrs. J. J. Fitzgerald, on Route 86 (described in a brochure as the Roosevelt Highway), midway between Saranac Lake and Paul Smith's. Howard Riley's family moved there after lightning struck their barns on the Split Rock farm and burned them to the ground.

From a Saranac Lake obituary for Herbert Scholfield, January 28, 1921

. . . he came to Saranac Lake in 1892. At that time he was seriously ill and not much hope for his recovery was held. He went to live with Mr. and Mrs. James Fitzgerald, of West Harrietstown, and for many years he was as one of the family. Although he regained his strength to a certain degree, he suffered frequent relapses. For two years he taught at the West Harrietstown district school [perhaps the Lake Clear Schoolhouse of Harrietstown Common School District No. 3] and was one of the most popular and best-liked teachers of the school which he had been an instructor. . . .

Miss Margaret M. Mullin has gone, to Ridgewood Villa, Bloomingdale [sic], to spend the remainder of the summer.

A Presbyterian church with a seating capacity of 300 will be built in Harrietstown. The location will be on the east side of the highway between the Ridgewood Villa and the Highland Lodge.  J. J. Fitzgerald is treasurer of the fund and together with F. G. Tremble donates the land required. The site is one of the most picturesque in this country, occupying as it does a prominent place in Harrietstown which is regarded as one of the most beautiful resorts in the state. It is proposed to erect a place of worship at a cost of $3,000. Already the people of the vicinity have contributed liberally to the fund.

A Presbyterian church is to be erected in the town of Harrietstown, on the east side of the highway between Ridgewood Villa and Highland Lodge. The building is to have a seating capacity of 300, and is to cost $3,000. GUY BOYCE, an architect, of San Juane, Porto Rico [sic], has offered to draw the plans as his donation toward erecting the church. J. G. FITZGERALD and F. G. TREMBLE have donated the site, and others in that vicinity are said to have contributed liberally toward the project.

...J. J. Fitzgerald, our W. M. and proprietor of Ridgewood Villa, has ten city boarders, with several more expected in a few days. Ridgewood Villa is one of the most charming of Adirondack summer resorts.

Saturday, Oct. 17th, being the twentieth anniversary of the marriage of J. J, Fitzgerald, now proprietor of Ridgewood Villa, in Harrietstown, to Miss Sarah L. Merrill, and Mr. Fitzgerald being Worthy Master and his wife Worthy Lecturer of Brighton and Harrietstown Grange, the members of that order planned a surprise, and nearly fifty people gathered at Ridgewood Villa Saturday evening.  Refreshments were served in the spacious dining hall, after which the host and hostess were presented with a chair as a small token of the esteem and appreciation of the members of the Grange for their untiring efforts in furthering the interests of the order during the four years since this Grange was organized. The presentation speech was made in an appropriate manner by Miss Ricketson, and Mr. Fitzgerald responded in his usual mirth-provoking manner, finishing his remarks by inviting the gentlemen to the smoking room to enjoy some of his excellent cigars. The remainder of the time until twelve o'clock, passed all too quickly with music, singing and games. The occasion will long be remembered as a most enjoyable one.

U. S. NEGOTIATING FOR SANATORIUM AT SARANAC LAKE

Negotiations between the government, says the Adirondack Enterprise, and prominent citizens here for the leasing of a sanatorium for the care of convalescent soldiers are still pending. The government is deeply impressed with the desirability of Saranac Lake as a location for their building, but stipulate that the proposed sanatorium [illegible] capacity to accommodate 150 [?] such a place can be obtained, the government will take a lease of a year and a half with the privilege of extending it in the event of a prolongation of the war. Efforts are being continued to find such a place.

A few days ago, Mr. Sessword of the John W. Thompson & Co., real estate brokers, to whom the government has delegated the task of obtaining sanatoriums in various parts of the country, was in town, looking over available places. He was referred to the Ridgewood Villa, the boarding houses of Frank Tremble and George LaBounty and the Hotel St. Armand. None of these are large enough to accommodate 150 disabled soldiers.