The road that starts at the Lake Flower dam at foot of Main Street and runs south down the western shore of Lake Flower, now called Kiwassa Road, was called Maple Street in 1910. The first left off of Maple Street going south, where Maple drifted away from the lake, was called Woodland Avenue. By 1916, the northernmost section, together with all of Woodland Avenue, had been renamed Riverside Drive. By 1928, the road had been extended to Kiwassa Lake and that section was named Kiwassa Road. In 2004, when the village addresses were changed in the implementation of the 911 Emergency Response System, the entire road, from the Lake Flower dam all the way to Kiwassa Lake was renamed Kiwassa Road, so that what is left named "Riverside Drive" is the part originally named Woodland. See the +map at the bottom of the page.

Improvements to Riverside Drive will start on May 13, according to an announcement made by Village Manager Millar Johnson at a meeting of the village board last night.

Listed as a WPA project, the work will include widening the present road to thirty-five feet, removal of the sidewalk to the lake shore side of the road, and the installation of new curbing.

In connection with the project Trustee Sol Drutz made a motion that Paul Smith's Electric Light Company be instructed to remove overhead wires and poles and to arrange for the installation of ornamental street lights on the new sidewalk.

Approximately four months will be required to complete the work, at which forty-eight men will be given work four days per week.

The appropriation calls for an estimated expenditure of $17,400, of which approximately $10,200 will be furnished by the federal government and the balance $7,200 by the village. 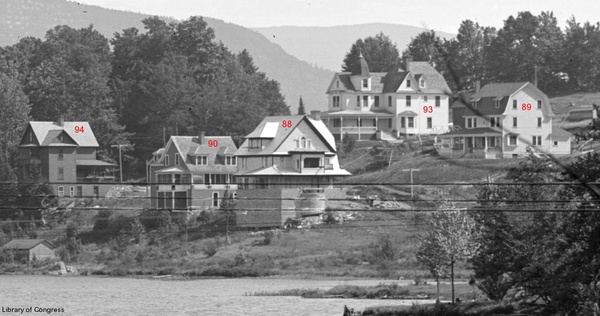 Detail from a 1902 photograph of part of Riverside Drive (click to enlarge). Pre-2004 street numbers are shown in red. Apparently taken from River Street near the Colbath Cottage. For the full photograph, see Lake Flower 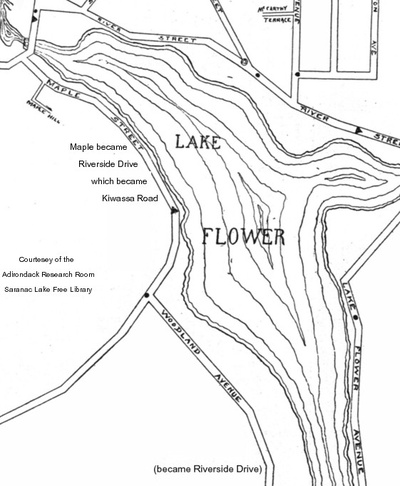 Riverside Drive, from the 1910 Village Directory