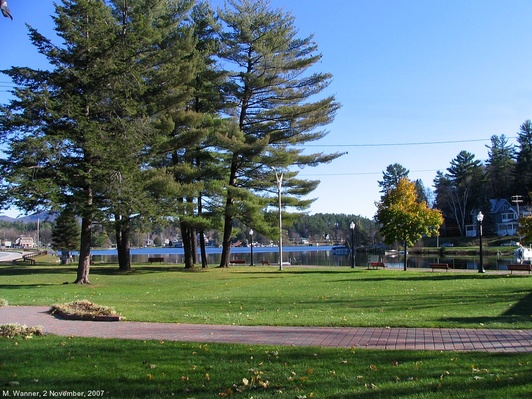 Riverside Park Riverside Park was initially a park on the site of the old Riverside Inn. Later, the park came to incorporate three other parks along the length of River Street: Seymour, Prescott and Mullen Parks; the four parks had been created between 1918 and 1937. The Village Improvement Society deeded the parks to the Village of Saranac Lake in the 1950s, with the provision that they remain parkland.

VIS, Historic Saranac Lake to be consulted on park plans

Riverside Park, which runs the length of River Street adjacent to Lake Flower, incorporates four VIS parks (Riverside, Seymour, Prescott and Mullen) created between 1918 and 1937. VIS deeded the properties, plus a small strip adjacent to Prescott Park, to the village in the 1950s with the provision that they remain parkland.

Saranac Lake is applying for a $200,000 matching fund grant under the Environmental Quality Bond Act, DePuy stated. If successful, the total of $400,000 would be spent on Riverside Park, the former village office area and local playgrounds.

Work would include replacing railing and paving stones in the park at the corner of Main and River streets and establishing rest rooms and a changing area at the beach in cooperation with the Department of Environmental Conservation. Also planned are walkways along the water (inside the guardrails), removing an old oil tank from the former Gladd and Leaper parking lot and upgrading the McLaughlin fountain in the lake.

Across the street, plans call for turning the pump house at 10 Main Street into an historic facility where visitors might view the turn-of-the-century turbines that still pump village water. Also being discussed is rebuilding the bridge connecting the peninsula, upgrading lighting and placing appropriate signs. The third phase would include upgrading all playgrounds to make them safer for children, repairing and resurfacing the tennis courts and repairing park equipment around the village.

Word on the outcome of the grant application should arrive late this summer, state officials have predicted. 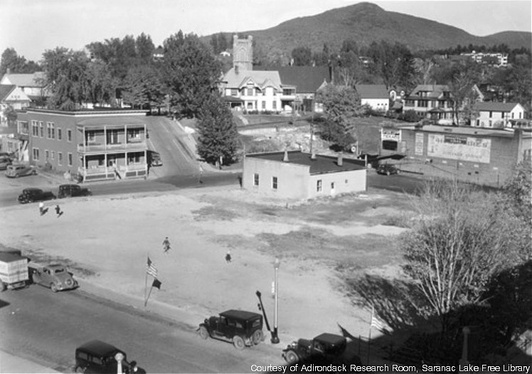 The land that would soon be Riverside Park is seen on October 12, 1935, after the Riverside Hotel was demolished.
Adirondack Enterprise, April 10, 2010SARANAC LAKE — How does a landscape architect feel as he walks through his first project 60 years later, stumbling over sinking paving stones and crunching across dead grass? Not too badly, actually. "You can see it's being used," Philip G. Wolff says with satisfaction as he looks around Riverside Park, "and the basic design still works."

Recommended to the Village Improvement Society (VIS) by Joseph Pullman Porter, his Cornell landscape architecture professor, Wolff designed the park at the corner of Main and River streets in 1936 as his class final. It was a greater project than either Wolff or the VIS could have foreseen for, more than any other park, Riverside's community use has escalated over the years. Today the park relates six decades of Saranac Lake history.

In Saranac Lake's early days the landmark Riverside Inn stood on the site, commanding a magnificent view up Lake Flower to the mountains beyond. But the advent of the modern, fireproof Hotel Saranac and the Great Depression closed the Inn forever. By the mid-1930s the deteriorating wooden structure and its tax loss had become a serious community concern.

The Village Improvement Society envisioned the Inn's site as the jewel in the crown of parks with which, following an Olmsted Plan for the Development of Saranac Lake, they were tenaciously encircling Lake Flower.

From its inception in 1910, VIS had been poor in pocket but wealthy in community goodwill. It had already created four parks on Lake Flower. The Riverside site was a wildly ambitious plan for the society's impecunious circumstances, but members persevered regardless.

VIS proposed joining forces with the village of Saranac Lake to tear down the deteriorating landmark and create a public park. Strongly supported by village leaders and the Adirondack Daily Enterprise, VIS emerged victorious from the storm of controversy which followed. A park the site would become, to be named Riverside after the historic edifice it succeeded.

Bolstered by Works Progress Administration (WPA) funds, the village agreed to demolish the structure, grade the site and underwrite landscaping according to the plan and materials VIS would supply. Partly on Porter's recommendation and partly because young Wolff, nephew of local resident A.C. "Ollie" Bartz, was already gaining a reputation for his landscape work, VIS selected him to design its jewel.

Wolff worked diligently the fall of his senior year in 1936, submitting two plans complete with estimates for the park. The first had a European flavor, the second followed the New England custom of village greens blending in better with the park's surrounding American architecture, Wolff pointed, out in correspondence with Mary Morgan (Mrs. Joseph L.) Nichols.

Presciently he added, "Also, if the adjoining property were ever secure...it would be much easier to draw up a unified relation between the narrow, informal area of the shore and this area."

Meanwhile, VIS selected plan two, the village green, at an estimated cost of $850 which included Wolff's services to care for the fledgling park the coming summer "including the watering of trees and shrubs, cutting of grass once a week, and edging the walks and beds," for $65.

The village graded the site and installed the flagstone paths. Under the WPA it was to supply topsoil and a gardener to landscape according to VIS' plan but suddenly the project found itself in crisis. A quantity of topsoil and four loads of Malone sandstone were missing, alleged to have been diverted to a Lake Placid project the gardener was also doing. He was fired, but now what? VIS turned to Wolff.

"Nineteen thirty-seven was a Depression year," Wolff relates "and a little extra cash was welcome. I agreed to take the spring term off and do the landscape planting."

"Boy, did I learn a lot about gardening from him," Wolff says appreciatively.

Having missed graduation with his class, Wolff returned to Cornell in the fall of '37, his mind still on the success of his first landscape project, as correspondence with Mrs. Nichols reveals. Had VIS paid the blacksmith on Woodruff Street who worked on the iron supports for the benches, and the Kendall Lumber Company for the oak supplied, he queried on Oct. 19, 1937, concluding "Be sure that the hemlocks are well watered and that they get a heavy mulch for the winter... if the sun gets too bright, cover the hemlocks with burlap to protect them..."

After completing his senior year in January 1938, Wolff returned to Saranac Lake where a busy landscaping future awaited.

"Looking back, this interruption in my college work was a fortunate event for me," he said. "While working on Riverside Park I met local architect Bill Distin, Sr., civil engineer Henry Homburger, and local contractor Andrew Callanan.

In the 1940s Wolff, now himself an Army veteran, headed a committee to locate an Adirondack rock to honor Saranac Lakes World War II veterans. The simple, dignified stone from the Franklin Falls area replaces Riverside's central sundial, an American flag waves alongside. The 1950s saw the discovery of tuberculosis controlling drugs and closing of local sanatoria including Ray Brook. The bright circle of flowers surrounding the memorial is planted each spring by prisoners from the Adirondack Correctional Facility which Ray Brook now houses, subtly noting a change in the local economy's direction.

The 1960s saw America on the move; thousands of cars jammed River Street's narrow lanes causing such summer frustration that the state Highway Department decided to expand River Street into a four lane highway, swallowing three other VIS parks and shaving down Riverside's northeast side but giving the village the opportunity to develop the entire River Street shoreline into one sweeping park as Olmsted had originally advised. Again VIS went to bat… and won. Wolff was promptly summoned to decide which trees to save in Riverside Park in opening the view and where to plant the new ones the Department Of Transportation would supply for the park extension.

By the 1980s, America had learned to appreciate culture and the Great Outdoors. Makeshift park concerts were so popular the village built a permanent bandshell with VIS advising on location and underwriting architectural fees In good weather the building is used almost constantly for concerts, plays, poetry readings and informal performances.

On holidays such as the Fourth of July, Riverside Park really jumps, hosting Rotary picnics, strawberry festivals, concerts and craft shows. And always people are there, wandering, resting, enjoying its welcoming peace and its glorious view. 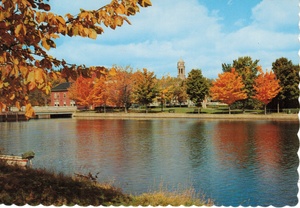 Standing recently in Riverside Park, Wolff gazed around. All that remains of his youthful endeavors are the two maples at the entrance behind the bandshell and the fir trees that once screened the garages, now grown tall and stately. But his plan has adapted successfully to 60 years of change reflecting the history of a community in which he himself has been deeply involved. Through it all VIS continued to advise the village on Riverside's development, and today it is the most used and useful of Saranac Lake's numerous parks. 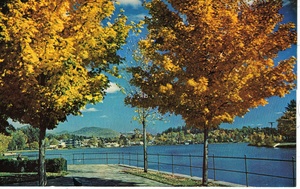 "The plan still works," Wolff said with pride, "though the park obviously needs care. The really remarkable thing is that back in those days they had the foresight to create a park and we don't have another gas station here."

For more, see the Lake Placid News story of March 18, 1976, "An Explanation of River Street Plans," at the bottom of the River Street page.