Dr. Robert C. Paterson was "one of the most prominent tuberculosis specialists in the country," according to an article in the New York Times. He was a graduate of McGill University, and had come to Saranac Lake in about 1909 because of his wife's health. He was John Black's doctor, and an active member of the Saranac Lake curling organization.

He was shot to death on December 24, 1921, by one of his patients, a veteran of World War I, who was apparently suffering from delusions.

Saranac Lake, N.Y., Dec. 24.--Dr. Robert C. Paterson, tuberculosis specialist, was shot three times and instantly killed in his office this afternoon by William Grant R. Johnson, an ex-service man who is said to be mentally deranged and is held by the police charged with the crime. Johnson was captured after a gunfight in which a policeman and pedestrians figured.

Johnson, backed against a fence, fired shot after shot at Patrolman M. M. Jones, who returned the fire. When Johnson's gun jammed, Lester Bean tackled him about the shoulders and felled him to the ground. Johnson pointed the gun at his own temple and again pulled the trigger with no result. He then turned to the policeman with a smile, "I won't hurt you boys," he said, "I got the man I was after."

It is said that Johnson fancied he had a grievance against Dr. Paterson, who made a report on his case, recommending, it is said, that he should be committed to an institution.

Two of the bullets entered Dr. Paterson's hip and the third his lung. Mrs. Patterson, who came downstairs when the first shot was fired, probably owes her life to the fact that she fainted when she saw the man, as one shot he fired passed over her.

Johnson was a drafted man serving as a private in France. He is said to have contracted influenza and to have been invalided home. He came to Saranac Lake about a year ago and later returned to his home. He arrived here this afternoon from Plattsburg and immediately went to the office of Dr. Paterson.

Dr. Paterson was one of the most prominent tuberculosis specialists in the country. He was born in Montreal and was a graduate of McGill University. He came here because of his wife's health twelve years ago.

William Grant R. Johnson, who killed Dr. Patterson of Saranac Lake the day before Christmas, was adjudged insane on Thursday last and ordered committed to the Hospital for Insane Criminals at Matteawan until restored to his right mind, when he is to be returned to the custody of the court and the criminal proceedings instituted against him are to be resumed or he is to be otherwise discharged. Judge Paddock had appointed Drs. P. F. Dalphin and A. G. Wilding to make examination and investigation of the case for the purpose of aiding and assisting him in its determination, and the investigation was conducted at the court house here before Judge Paddock on Thursday. Assistant District Attorney Clark aided in conducting the examination and Col. Ransom H. Gillette, of Albany, looked after the interests of the prisoner. The hearing continued till about four o'clock in the afternoon and the testimony of numerous witnesses was taken. These included Dr. George Stack, head of the U. S. Public Health Service at Saranac Lake, as applied to ex-service men; Carrie M. Smith, proprietor of Smith's Sanitarium in that village, where Johnson was under treatment; Mary McMartin; an employee of that sanitarium; John T. Wylie, Blair A. Pennington and Benjamin Talbot, ex-servicemen who were patients at the Smith Sanitarium; Dr. Lawrason Brown, of Saranac Lake, who treated Johnson, Miss Ora Savage, secretary of Dr. Patterson, the victim of the homicide; Sheriff Steenberge and Deputy Sheriff Kerry. Drs. Dalphin and Wilding also testified as to the results of their examination of defendant, and their findings. On this testimony Johnson was adjudged insane. Johnson's father was present at the proceeding. 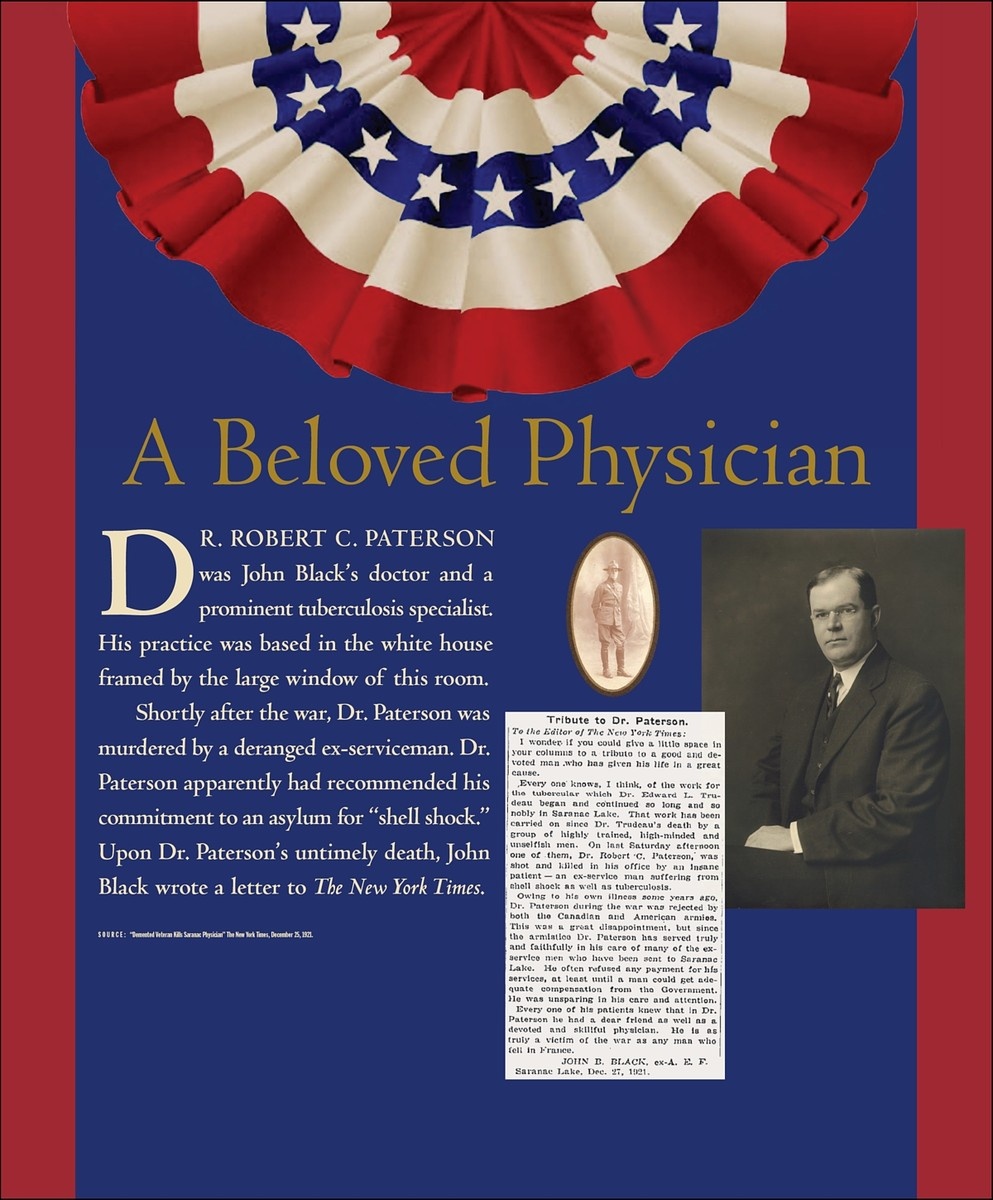