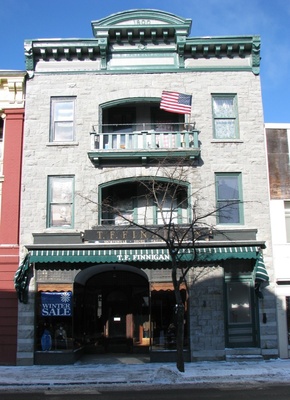 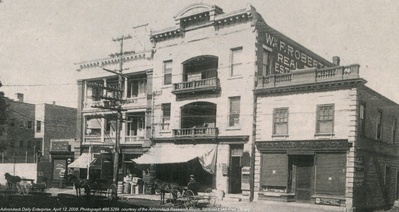 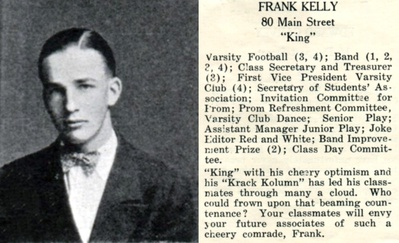 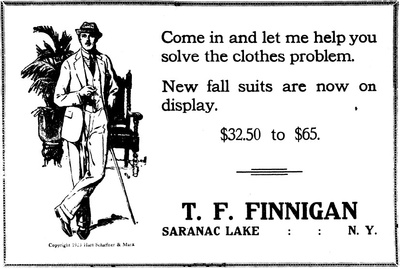 Immediately after purchasing the northern part of the Annie Miller Homestead Lot, William F. Roberts built what has become one of Saranac Lake's favorite buildings. The Roberts Block, at 80 Main Street, better known as the Finnigan Building for its owners of the past 58 years, was completed in 1900.

William Roberts was a real estate dealer ("renting cottages a specialty"), an insurance agent (Equitable Life), a "notary public with seal", and an operator of an "intelligence bureau", according to signs that adorned his new building.

Other early occupants were: Dr. J.B. Besant, "surgeon-dentist" prior to 1907; Dr. Pattinson, dentist, George Schrader, architect, and "Miss Nettles", dressmaker, in 1910; and Franklin Real Estate in 1915.

Perhaps from the beginning but certainly prior to 1907, A. Bruzza Confectionary occupied the ground floor storefront. This business is remembered well today by older residents for its marble tables and counters, its baskets of fruit, its ice cream and candy, and its stalks of bananas hanging in the windows — sweet memories for children in their seventies and eighties. Three steps up to the raised floor took the hungry youngster into this hall of delights.

In November, 1904, Roberts sold the building to Frank H. McKee who continued to lease office space to the former owner and the store to the Italian confectioners. In 1917, he signed a renewal of the lease agreement with Antonio Bruzza for the period of May 1, 1918 to June 1, 1923, for $100 per month. However, 21 days after the new lease took effect, McKee sold the property to Thomas F. Finnigan. 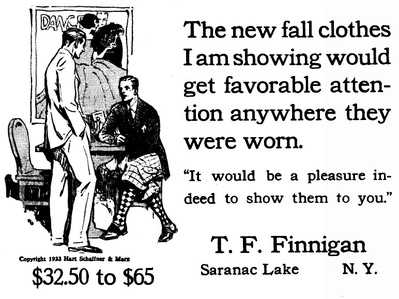 Lake Placid News, August 31, 1923
The new landlord was a partner in C.J. Carey Clothiers-Outfitters across the street. He had formerly been the business manager at Paul Smith's Hotel. Following the death of Paul Smith, Sr., or the "old gentleman" as his employees called him, Finnigan found himself philosophically at odds with Paul's son Phelps; so, he left the latter’s employ to seek his fortune in Franklin, Tennessee, about 18 miles south of Nashville. After a tornado struck the town, Finnigan returned to Saranac Lake, saying, "I've seen people and horses hanging in the trees, and I don't want to see that again."

Finnigan stayed with Carey until the Bruzza lease expired and then remodeled the Roberts Block storefront, lowering the floor to sidewalk level and installing the beautiful cherry fixtures and furnishings that have remained a hallmark of T.F. Finnigan to this day.

Like Carey's, Finnigan’s clothing store catered to people who were quality conscious, conservative and often quite wealthy. The Finnigan connection with Paul Smith's Hotel, from whose store well-to-do camp-owners on the St. Regis Lakes purchased $225,000 wholesale per year in Cross and Blackwell food products alone, was a marketing advantage few could match. To this was added a concern for fine wares at a fair price. Finnigan’s prospered.

Of all the clothiers in Saranac Lake during its boom period (at least ten, including two furriers and a millinery), T.F. Finnigan is the only one still in business. Also, along with Madden’s Transfer and Storage, it is one of the very few businesses in the community that has been a family affair for three generations. Tom Finnigan, Jr., began working for his father doing odd jobs at age 14. Now he is distinguished as "Old Tom" because on any given day one might find either him, or his son, Tom the younger, in charge of the store that has become an emblem of stability in the shifting scene of Main Street.

The facade is of randomly coursed, rock-faced, limestone ashlar, except for the corners of the ground floor where smooth cut ashlar are interbanded with the rockface.

The single, ground floor storefront has a deep, trapezoidal entry with a vaulted ceiling whose cross-section is a basket arch. The full-sized display windows have bronze stiles. Above them are panels of Luxor prisms, the last unpainted ones in the District. Against the bronze awning frame rests a black sign with gold letters reading “T. F. Finnigan”. A simple, residential entryway stands to the right of the storefront. Set into the center of the second and third stories of this three-story stone and brick building are two recessed balconies under segmental arches. The upper balcony is actually both recessed and "normal". The normal, overhanging portion is a little more than a third as deep as the recessed portion and is supported by three brackets and guarded with a simple, slat-work and square-post railing. The arches and their supporting walls are wood-trimmed with recessed panels.

Topping this strong and distinctive facade is the finest entablature in the District. It is based on the Serlian motif. Four brackets ornately embossed with a foliage pattern and three sets of five embossed dentils support a cornice in three parts. The outermost brackets are the more robust. The narrower, inner brackets are aligned above the skewbacks of the balcony arches. The central section of the cornice is raised upon squat posts above the inner brackets to bring it to a level higher than that of the flanking sections. Finally, it is crowned with an arched pediment that reflects the arches of the balconies below. In its lunette is displayed the date "1900". Finishing touches are achieved with both recessed and pronounced panels.

This entire feature is made of galvanized metal, and old photos show that it was not painted until at least 1907. For many years it has been painted a pale, limestone grey and dark green, as has all of the building's woodwork.

Inside, the store's drawers, cases, shelves, racks, and recesses are all built of quarter-sawn cherry while the walls of the display windows are paneled with solid mahogany.

After three generations, T.F. Finnigan's is bought by brothers who plan to 'continue the tradition.'

Tom Finnigan, grandson of the founder, sold T.F. Finnigan's to Jimmy and Johnny Williams on August 16, 2018. The brothers are also owners of the bar and restaurant Bitters & Bones. See the Enterprise for the full story.