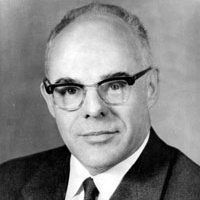 Roger Wellington Tubby was White House Press Secretary from 1952 to 1953 under President Harry Truman. In 1953, with James Loeb, who served as consultant to Truman's White House Counsel, he bought the Adirondack Daily Enterprise, which they operated until 1970. From 1962 to 1969, he served as U.S. Ambassador to the United Nations and other international organizations headquartered in Geneva.

He was appointed deputy commissioner of operations and management of the New York Office of Parks and Recreation by governor Hugh Carey in 1975. He was instrumental in the building of the Adirondack Northway. 1 He served on the New York State Tourism Council until 1988.

Ad astra per aspera: To the stars, through difficulties. Harrietstown Cemetery.

By the Enterprise Staff SARANAC LAKE — Roger Tubby, journalist, founder of the Adirondack North Country Association and former U.S. ambassador and press secretary to President Truman, died this morning at his home following a long bout with cancer. He was 80 years old. Tubby's career in government and politics included work for many leading Democratic figures including President Truman, one-time presidential candidate Adlai Stevenson, New York Gov. Averill Harriman, and Secretaries of State James Byrnes, George Marshall and Dean Acheson. In 1954 he was a candidate for the Democratic nomination for Governor of New York.

Word about Tubby's death spread around town this morning and several officials of organizations which he either founded or had played an instrumental role remembered the man.

"ANCA is Roger's legacy to the citizens of Northern New York. His passing leaves a great void and we will miss him dearly in the days and years ahead," he concluded.

"The North Country lost today its most tireless champion," said David Petty, president of North Country Community College. "His having chose, this area to be his home has made this a better place for all of us living here now.

"Roger's support for higher education helped bring to Essex and Franklin counties a State University Community College," Petty continued. "That same support has strengthened all of the colleges in the North Country. His legacy will pay a dividend to future generations of students."

William Doolittle, who succeeded Tubby and James Loeb as publisher of the Enterprise remembered Tubby as a dear friend and a very good friend of the people of the Adirondacks.

"I found Roger to be a wonderful guy and friend, and very supportive of anything anyone tried to do to promote economic growth in the Adirondacks," Doolittle said; "His major focus was trying to diplomatically expand the economic base of the Adirondacks."

Tubby wrote a column for the Enterprise in his retirement years.

In addition to serving as a trustee from 1954-84, he was a founding member of the Trudeau Institute, following its transformation from a tuberculosis sanatorium into a research facility.

Tubby was born Dec. 30, 1910 in Greenwich, Conn., the son of George Prentiss and Frances Kidder Tubby. He attended the Choate School and graduated from Yale College in 1933. He then joined the staff of Time magazine, where he worked from 1934 to 1935. He then became a reporter and editor of the Bennington, Vt. newspaper The Banner until 1942. He was active in politics and government in Bennington, the start of a lifelong interest in community affairs.

During World War II, Tubby worked with the Board of Economic Warfare and the Foreign Economic Administration as assistant to the administrator. Following the war, he became press officer for the Department of State and then White House Press Secretary for President Truman.

Tubby moved to Saranac Lake and became co-publisher and editor of the Adirondack Daily Enterprise in 1953 in partnership with Loeb. While working for the Enterprise, Tubby took leaves of absence to work for Gov. Harriman in Albany, for Stevenson's unsuccessful bid for the presidency in 1966 and for the Democratic National Committee's press relations staff during John Kennedy's 1960 presidential campaign.

From 1962 to 1969, Tubby was the U.S. Ambassador to the United Nations and other international organizations headquartered in Geneva. From 1969 until 1972 he was Dean of the Department of State's Foreign Service Institute. In the summer of 1972 he returned to Saranac Lake and joined the staff of Paul Smith's College.

Mr. Tubby was also chairman of the Adirondack Northway Committee, which campaigned successfully around the state for a constitutional amendment making possible the highway which now links Albany with the Canadian border.

Tubby was involved in numerous community activities and organizations throughout his long life. He was on the Board of Trustees of Trudeau Institute, the Champlain Valley Physician's Hospital in Plattsburgh and past director of the Saranac Lake Chamber of Commerce.

Indicative of Tubby's long-range planning, he penned his own obituary several years ago. He asked that the following passage be used in its entirety.

"Indeed, Tubby was never successful as a writer, which is what he most wanted to be. He did write a novel, which received some encouraging response from a New York publisher, together with some pointed criticism, but mainly because of other interests he never revised it, and never tried to write another."

The Keough and Son Funeral Home is handling the arrangements. A complete obituary is expected to run in Tuesday's issue of the Enterprise.