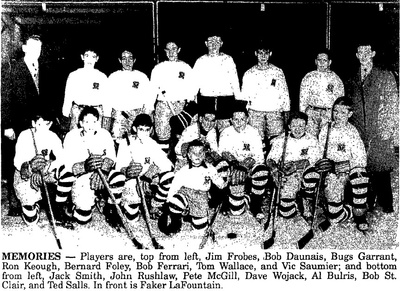 A stroll down memory lane with Ron Keough

Special to the Weekender SARANAC LAKE — Do you know what team this is?

It is the Lake Colby Skating Association. Pete McGill sent the photo to Ron Keough for his birthday on Feb. 3.

Pete's mom thinks this picture was taken in 1945. We graduated St. Bernard's grade eight in 1948. My recollection of the time frames are that the team formed out of the hockey team that developed from the skating rink that used to be at St. Bernard's School.

This rink was built and maintained by students and parents. My Dad used this Gravely plow to clear the rink of snow. Those of us who played hockey used the fire hose from the basement of the old St. Bernard's Church to flood the rink. The rink was in two parts — one for hockey and the other for general skating.

The photo time seems to me like it was 1946 or 1947. But Pete's mom may be right. She used to serve up a lot of hot chocolate, along with the St. Clairs and my mom.

We used to walk to Lake Colby School to practice on the rink that was there on the playground in the winter. After practice we would go to Durgan's for hot chocolate with Bea and Mose LaFountain and catch a ride home with the coaches. For those who may not know — Durgan's was where Muldowney's — later Bill Jost's — place on Lake Colby Drive is.

Once in a while we got to practice in Lake Placid. We used to play Lake Placid and regularly won.

I believe this picture was taken around winter carnival time — we had a Colby Skating Association float in the parade. I think this picture was taken because we were scheduled to go to New York City and play a preliminary at the Garden before the Ranger game in some kind of tournament. The photo is in the old 1932 Olympic rink. Our coaches and Charlie Keough knew the then-coach of the Rangers and arranged for us to go. I think the Ranger coach then was named Pat Patrick. We had started a fund drive to finance the trip and slay with free tickets to a Ranger game.

Placid got wind of our invitation to New York City. Since the Ranger Farm team — Lake Placid Roamers — played in Lake Placid at the time, the Placid youth team pre-empted us and sent their team instead.

This was the start of the hockey program in Saranac Lake. The high school hockey coach then was, I think, a man by the name of Parks. Butler Sullivan then became coach —I think 1950.

We put up our own hockey pen on the Petrova Avenue field, did our own shoveling and flooded the rink ourselves. If our grades were good enough, we were allowed to use study hall time to work on the rink.

I am not certain who else coached later but I think Phil Lalande coached high school for while, too. Of course, this is all pre-Gilligan time.

Before that in the early 40s everyone would skate in the old Curling Club rink, which is now Madden's storage area near the Pine Ridge Cemetery.

Interesting line of history: Vic Saumier one of our coaches played wing or center with Charlie Keough in high school, so the story went. I remember watching hockey games on Pontiac Bay and skating on the oval around the hockey pen and watching speed skating and barrel jumping in Pontiac Bay.

We were in the Clarkson College High School Hockey Tournament. We used to stay in their dorms. We were in the finals with Salmon River and tied at the end of the game. We then played five 10-minute overtimes and were still tied. The officials and coaches then decided that we would play non-stop until someone scored. The sixth overtime, I believe, was 22 minutes long before, I think, Pete McGill scored the winning goal. We were told that it would be entered into whatever records of U.S. high school hockey as the longest game on record.

We started around 6 p.m. and it was after midnight when we left the ice. Our coach was Butler Sullivan. I believe Taffy Dupree was coaching the Salmon River team.

Out of that high school team, Pete later was a coach and referee. Roy Garrant coached and was a referee. Bob St. Clair coached and had a son headed to Sweden for a special team when he had an accident and was not able to go. I spent hours with others in our local hockey association. My dad bought a snowblower in the late 50s to use on the association outdoor rink, before the village and school finally began to invest in the hockey program. All five of our sons played both association and high school hockey. Our second son, Pat, is still playing hockey in Washington in a midnight league.

Thanks to Pete for the photo, I thought I would add a little background history as I remember it. Perhaps someone else has some information on the history. The speed skaters for the association might remember some names and dates. They eventually formed the Saranac Lake Speed Skating Club.

This same group of kids used to ski at Betters Hills on Kiwassa Road and St. Joseph's Friary hill and St. Joe's ski jump. We also had a toboggan run at McGill's, and a bobsled run at Russ Novell's on Virginia Street, all of which we did ourselves with help from parents.

During these winter months, we switch from lawn mowers, trimmers, and fertilizer to snow blowers, shovels and deicing salt. Recently, as I was shoveling the sidewalk, the village sidewalk plow came by clearing the sidewalk on St. Bernard Street. As it went by, I thought back to the first time I shoveled these same walks. I wondered how much snow I had moved off the sidewalks around the building since 1944. When we first moved into the funeral home in 1944, we had a lot of snow. I remember my Dad sending me to Charlie Green’s Market to bring back several of the old wooden baskets, with the wire handles that fruit and vegetables came in.

His game plan was that he would fill the baskets from the stairs and landings, and I would carry them to the curb and dump them on the snow bank left by village plows. The horse drawn sidewalk plow would come by, driven by Mr. Cassavaugh and later by Jim Latour. Somehow, they could adjust the plow width as they went along. In those days, they used the grader to plow back the snow and to scrape down the roads and banks. When they picked up the snow, the grader would use the big blade to move all the snow to the middle of the street. When there was a lot of accumulation, the grader would lower the big teeth on the grader and pop all the ice up from the street. As I recall, Mr. Flagg and Mr. Miner were the operators.

The village dump trucks were equipped in the winter with scoops in the front. The operator would raise or lower the scoop by raising or lowering the dump box. They would scoop up the snow in the middle of the road and tote it off. Sand was spread by hand with a man in the back of a dump truck spreading sand with a shovel by hand. The sidewalks were done by hand, spreading the sand on the sidewalk from a pail. Technology has changed all of that, but what has remained is the time and long hours highway crews put in to deal with the snow. So thank you to all of the crews over the years who have kept and are still working to keep our roads and sidewalks safe.

Excerpts from "Reflecting on what makes a Happy Birthday"

We moved over the funeral home Feb. 8th, 1944. My birthday party that year was at 166 Lake Flower Ave. That is where we were living before the move to the funeral home. [Some of the friends who came to that party were] Fuzzy Wallace, now Fuzzy Scollins, her sister Barb, who is now Barb Stunzi, the Vaughn family who lived up the street, Phyllis and Joyce [Morency] Woodruff. Alice Wallace was a good friend of our family and she made the chocolate cake. Mary and Bill Chennier lived next store [sic: door]. Mary came and played the accordion, and Bill played the spoons. He tried to teach us how to play the spoons, but none of us could manage to hold the spoons right and still play them.

Those of us who lived on Lake Flower were often referred to as "Rat Streeters" . . . because of all the muskrats on that stretch of highway. My Dad, Bernard Brown, Bill Wallace, and some of the Dupree's hunted rabbits each weekend. So for my birthday that year [1945] my Mom made a German dish--Chicken pie--or ALA rabbit pie--based on Mrs. Trudeau's famous Rabbit Pie. . . . The Wallace sisters were there and Alice again brought her very famous chocolate cake. That year, some of my friends from St. Bernard's School came. Among the names that I remember are Ian Haye, who lived in the white house next to the Ray Brook Golf course. The house is located next to the 8th green and the 9th tee. This house later became Fitzgerald's restaurant. Ed Lynch--who was a leap year baby and a long time friend was one of them. His Dad was a butcher--I don't remember where he worked. [Transcriber's note: He worked at the Lake Placid Club.] Jimmy Nolon was here while his Dad cured for TB. Bobby St. Clair, Pete McGill, Allen Bulris, Carol Wilcott, Theresa Dudash, Mary Ferrari, and others from School. Some of the St. Clair family is still here in SL. Emily Fogarty and Anne TenEyke. Carol Wilcox--I think her Dad ran the news company at that time. Mary Ferrari lived on Margaret St. I don't remember what her Dad did, but he made great home-made Root Beer. There are still McGills here. Al Bulris's Mom was a nurse at the Ray Brook TB Center. That year, [1945] my Dad gave me a small hunting knife in a leather sheaf for my birthday. It was to be used by me to skin the rabbits they brought home. I still have that knife. . . .