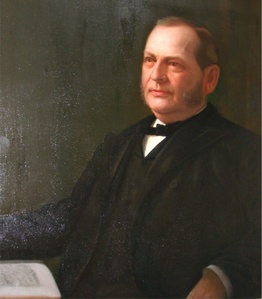 Roswell Pettibone Flower was the Governor of New York from 1892 to 1894. He signed the Adirondack Park Enabling Act in 1892, though the next year he proposed a bill that became known as the "Cutting Law," authorizing the Forest Commission to sell trees from any part of the Forest Preserve. This effectively undermined the chief purpose of the Forest Preserve, and led to the crafting of the Forever Wild clause in the State Consistution.

Lake Flower, created in 1827 as a mill pond when Captain Pliny Miller dammed the Saranac River, was named in his honor after he provided state funds to clear it of stumps left by the flooding of previously forested land. He initially vetoed a measure that would have provided $20,000 to do the job, but later signed a bill that provided $5,000, and a later bill adding $4,000 to complete the work. 1

There is a story that Wallace Murray, a supporter of Governor Flower, held a ball in his honor that was instrumental in securing his approval of the funding. 2 Murray was awarded the $5,000 contract to clear the stumps. 3 It is interesting to note that Wallace Murray formed the Saranac Lake Light, Heat, and Power Co. at about this time, and Governor Flower may have been instrumental in its founding.

On Wednesday of last week the Governor sent the following to the Assembly: "Assembly bill No. 623 (Mr. Halls); entitled 'An act to improve and clear Saranac river in Essex and Franklin counties, above the dam at Saranac Lake, in Franklin county, and making an appropriation therefor,' is herewith returned without approval. This measure appropriates $20,000 of public money for local improvements in the vicinity of Saranac Lake. I am unaware that any obligation is imposed upon the state to make this improvement, and, inasmuch as it will benefit local interests exclusively, the state, in my opinion, should not be called upon to pay the expense incurred. I do not think the people of the state will approve lavish appropriations for the benefit only of particular localities. It is the people's money which is thus voted away, and the same careful scrutiny should characterize its distribution that we as individuals would apply to the disposition of funds which we hold in trust for others."

There is no town in Franklin county whose voters, of both parties, are so ready to resent and punish an official injustice as those of Harrietstown, a part of which Saranac lake is. Should Gov. Flower ever be a candidate again for a State office, he will doubtless be made to realize as much.

The improvement which the vetoed bill was intended to effect is of more than local concern. Saranac Lake is one of the most popular resorts in the Adirondacks. It is visited both summer and winter by a very great number of city people, especially by health seekers. It is also the seat of a sanitarium which has already done inestimable good and holds the possibilities of saving other lives. The proposed improvement would not only have made Saranac Lake more attractive —a condition of great value in the case of invalids—but it would also have contributed to promote the public health by reason of securing the: removal from the stream of a mass of decaying logs and timber.

Saranac Lake will be sorely disappointed and aggrieved by the veto.

State Engineer Schenck has been for some time past improving a little lake in the village of Saranac Lake in the Adirondacks.

It is formed by the Saranac river and has been named Lake Flower, after the governor of the State. The lake has been thoroughly cleaned and many tree stumps and roots removed, and it now presents a beautiful and natural appearance. Work has been done under an appropriation of $5,000 from the last legislature.

1. Chapter 141 of the New York State Laws of 1893, contained a bill dated March 16, 1893 that appropriated $5000 for the purpose of removing tree stumps from the lake. Chapter 169 in the laws of 1894, contained a bill dated March 23, 1894 appropriating $4,000 that was entitled "An act to provide for the completion of the improvement of the Saranac River in Franklin and Essex Counties." —Adirondack Daily Enterprise, November 18, 1970
2. I can find no primary source for this story. See the articles on the Wallace Murray page.
3. Plattsburgh Sentinel, September 15, 1893