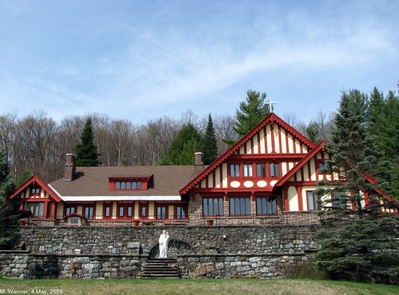 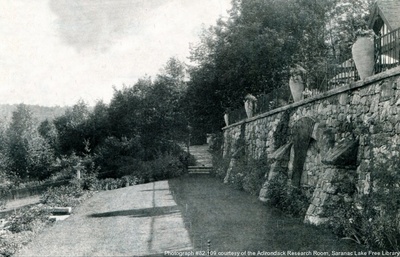 The Rumsey Cottage was built by John W. Rumsey, former owner of the Embassy club in New York city for his wife; it is said to have cost $250,000. By the time it was completed, the Rumseys were divorced. In October 1936, Gerald and Sara Murphy (friends of Ernest Hemingway, John Dos Passos, Archibald MacLeish and Dorothy Parker) rented the Rumsey Cottage in the Glenwood Estates subdivision for their son, Patrick, seriously ill with tuberculosis. This was one of four places in the area where Sara and Patrick lived during his illness; Gerald visited frequently while continuing to work at Mark Cross Co. in Manhattan. Patrick’s condition continued to worsen, and he died January 30, 1937 at age 16. He had been sick for over seven years, almost half his life.

The St. Joseph’s Rehabilitation Center for alcohol treatment opened in Saranac Lake in 1971.

There was apparently a small ski area and ski jump at what was called the St. Joseph's Friary, according to a story by Ron Keough; see the 1994 story on that page.

One of the Franciscan Friars at the Friary was the Reverend Martin Carter.

It is presently used as St. Joseph's Rehabilitation Center.

The palatial Rumsey estate, one of the show places of the Adirondacks, which is to become a preparatory seminary of the Friars of the Atonement, has been known since its construction in 1929 as "the House that Jack built."

The estate was built by John W. Rumsey, former owner of the Embassy club in New York city, at an estimated cost of $250,000 when completed.

Mr. Rumsey built the house for his wife, the former Ruth LaMar, of New York. At the time the building was completed, however, the couple was divorced. Mr. Rumsey occupied the estate with his mother in 1929 and 1930. During the time of his occupancy he was host to many notables of the stage and screen and it was believed that Mr. Rumsey had intended to turn the place into an exclusive Adirondack club where stage notables could come for brief rests. The plan never materialized, however.

Since passing out of Mr. Rumsey's control the estate has been occupied by a number of tenants including Sen. John H. Dunnigan, minority leader in the assembly; Gerald Murphy, president of the Mark Cross concern in New York city and Wendy Barrie, stage and screen star, who occupied it in the summer of 1936.

The main building of the four-acre estate contains 16 rooms The house is set on a hill above Lake Flower and affords a view of the entire lake as well as the mountains across the lake.

The property is located in the Glenwood estates approximately a mile from the center of the village. The location is one of the most beautiful in the vicinity and the front porch of the main building overlooks Lake Flower.

Harmon S. Auguste, New York city businessman and philanthropist, assumed control of the property several years after it had been built when he foreclosed the mortgage.

Donation of a 16-acre tract of land adjoining the Rumsey estate to the Friars of the Atonement by Harmon S. Auguste, prominent New York stock broker and philanthropist, has been announced. Included with the gift, is the modern two-story "barn" located on the land.

The Franciscan order, which has purchased the Rumsey estate and four acres surrounding it from the Saranac Lake Society for the Control of Tuberculosis for the purpose of establishing a preparatory seminary for young men entering the priesthood, now has total holdings of 20 acres of land, the 20-room Rumsey building and the "barn."

It is believed that the barn, constructed at an estimated cost of $20,000 with a special cork floor, will be reconstructed into a chapel for the order.

Possession by the Friars is not expected until May 1. At that time, it is believed that alterations will have already been started with the main Rumsey building turned into class rooms and dormitories and the barn converted into the chapel. In addition, it is expected that the land surrounding the buildings will be landscaped and gardens planted.

Although summer classes are planned, the regular school session will begin on September 8. Approximately 50 young men between the ages of 18 and 25 will attend the school at first, more to be admitted later on. Graduates of the seminary will attend the Friars school at Catholic University, Washington, D. C. Headquarters of the Friars of the Atonement is at Graymoor, Garrison, N. Y.

SARANAC—Fire starting from a burning grass patch was carried by the wind through the woods and towards St. Joseph's friary on top of the hill and was brought under control by volunteer firemen of the local department. Residents were burning over a sizeable grass patch when dry ferns caught fire starting a running blaze which the persons were unable to handle. Several acres were involved.

The Rev. Father Stevens, S.A., of St. Joseph’s Friary left Sunday night for New York city where he will embark on a mission to the Diocese of Nelson, Green­ wood, British Colombia, South America.

SARANAC LAKE - The regular monthly meeting of St. Joseph's Fraternity of Secular Franciscans will be held Sunday, Dec. 16 at St. Joseph's Friary in Saranac Lake. Mass will be at 2 p.m. There will be the usual Christmas Crib Devotion followed by the Christmas Social. We would be happy to have anyone interested come and celebrate with us.

An obituary ends  …A Mass of Christian burial will be held at 2 p.m. Thursday at St. Joseph's Friary Chapel, Glenwood Estates, Saranac Lake with the Rev. Daniel Callahan and the Rev. Arthur Johnson officiating. Interment will be in St. Bernard's Cemetery in May. Memorial contributions may be made to St. Joseph's Rehabilitation Center or the Saranac Lake Volunteer Fire Department Rescue Squad in care of the Fortune-Keough, Funeral home which was in charge of arrangements.

THE HOUSE ON THE HILL

St. Joseph's Rehabilitation Center first came into existence as an alcohol treatment center in 1971. Founded by the-Franciscan Friars of the Atonement at Graymoor in Garrison, NY, the building that has been home to St. Joseph's Inpatient Program for over twenty five years, was first used as a novitiate, or place to train future members of the Friars organization. The house was originally built in 1928 by John W. Rumsey, a New York City literary agent and night-club owner. His decision to build a twenty room, ten bath, two stable, three car garage, and a helper's house was not exclusively due to its beautiful setting on the hill overlooking Lake Kiwassa in Saranac Lake. It was 1928 and despite Prohibition in the states, the property's close proximity to the Canadian border assured the availability of alcohol for his speakeasy in the city.

The property was deeded over to the Atonement Friars by the Saranac Lake Society for the Control of Tuberculosis in 1941. It had been given to them four years earlier by the Rumsey estate. From 1951 until 1960 the Friars used the property as a school of philosophy and theology, returning it to a novitiate once again in 1961. Declining numbers of men entering the priesthood coupled with the need for a treatment center for homeless and unemployed men with addiction problems, caused the Friars of Atonement to decide in 1971 to establish the first free standing alcohol treatment center in New York State. Today St. Joseph's carries out the ministry of the Franciscan Friars at Graymoor by offering a continuum of services to both men and women.

The original building has been added to, most recently with a 14 bed facility for women and a family building for family members of residents. In addition to being the home for up to 62 residents for periods ranging from four to eight weeks, a herd of friendly deer occupy the grounds. St Joseph's at the end of Glenwood Estates has been and continues to be a peaceful curing spot for over seven thousand grateful recovering alcoholics.