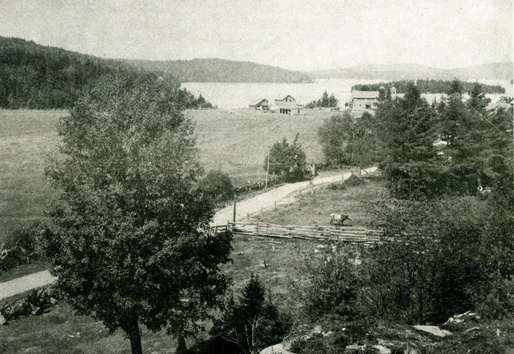 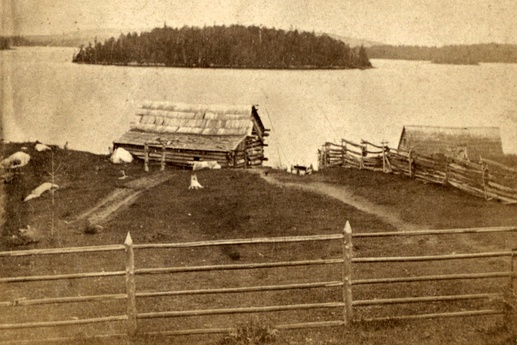 Corey's Landing, 1865. Upper Saranac Lake. H.S. Tousley, photographer.
The photograph appears to show Corey Island
The Miriam and Ira D. Wallach Division of Art, Prints and Photographs: Photography Collection, The New York Public Library. The New York Public Library Digital Collections. The Rustic Lodge was a hotel at the south end of Upper Saranac Lake at the upper end of Indian Carry. The original lodge was built in 1850 by Jesse Corey, the first white settler on Upper Saranac Lake, who operated it as a hotel; he also hauled boats, canoes, and people over the Indian carry.

In 1897, the property, including the Indian Carry and Rustic Lodge, was purchased by Eric P. and S. A. Swenson of New York in 1897. They continued to rent the lodge to Charles H. Wardner, who had rented it from Corey, and left the carry open to the public. In 1913, they decided to restrict it to their own private use and they tore down the old lodge buildings.

The present camp, known as the Swenson Camp was built around 1931. The original buildings are gone. The Swensons also built a nine-hole golf course here about where the Indians had planted corn. There were two garages, a barn, boathouse, and a small grocery on the property. There was also a chapel, the Indian Carry Chapel, built in 1898 by the Champlain Presbytery.

The Rustic Lodge was seasonally occupied by Roderick Swenson and his family until 1966, when it was sold to Gregory Nowakoski and Bernard Nemeroff of New York.

Rustic Lodge on Indian Carry, photographer F.E. Slocum, c. 1880
Courtesy of the Adirondack Experience
The changes to Rustic Lodge were not long in coming; two years later in 1913, the Swensons decided to tear down the old lodge buildings as well as the boat house, the little "grocery" at the landing, and the ice house. They also built a new road around the property terminating at a new dock to direct traffic from the Rustic Lodge dock. In a 1912 item in the Tupper Lake Herald the paper took note that this was a sore spot in public relations stating. "Old guides and canoeists are not happy about the closing of the old Indian Carry — the Adirondack guides have long come to regard this as public domain. The new landing place is too shallow for those who use launches, and the road is longer than the old, A barrier has recently been built, however, across the ancient carry road," (Note: This was a legal procedure which theoretically closed the road, but in reality travelers continued to use the old carry for a number of years and the Swensons did not object.)

Today the carry as the old timers and ancients knew it has been completely re-routed. The lake side of the carry is still in South Bay but some distance away and after crossing Route 3, a recently cut carry trail now enters the Stony Creek Ponds in the North Bay of the Second Pond rather than the Petty landing on the Third Pond. 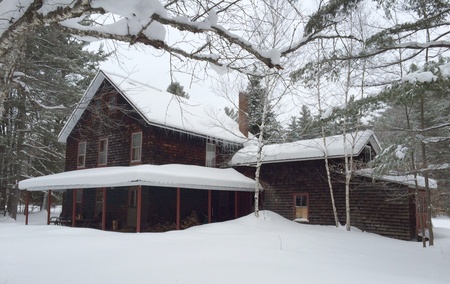 The Guide House on Indian Carry Road, built in the late 1880s, the last remaining original building from the Rustic Lodge and later the original location of Spencer Boatworks .
Photograph by Herbert MacArthur, courtesy of Diana WebsterAdirondack Daily Enterprise, November 3, 2000

[A]nother nine-hole golf course [] was located on the Upper Saranac Lake at Indian Carry which was called the Rustic Lodge Golf Course. This lodge was one of the oldest hunting and fishing resorts in the Adirondacks. It could be reached by road that no longer exists as well as by steamer from Saranac Inn.

In the late 1890s the lodge was sold to E.P. & S. A. Swenson who also built the golf course. This course was quite popular with residents of Upper Saranac. It was closed in the 1940s, but some of the course layout is still visible along with the evidence of the elaborate watering system.

An enlarged view of the photograph at top.