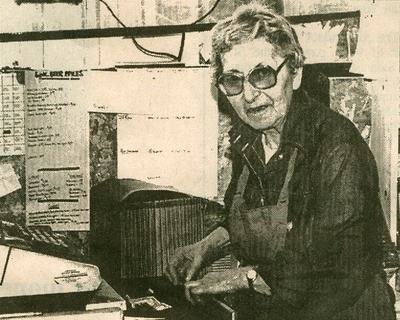 Ruth Effenbach at the register of the Oxford Market. November 4, 2002 Born: ~1917 in Washington, D.C., the daughter of Adolph Effenbach and Helen Jacobson Effenbach

SARANAC LAKE - Ruth Effenbach, owner and operator of Oxford Market on Broadway, died Friday at the age of 85.

A familiar fixture to several generations of area residents, Effenbach will be remembered for her friendliness, good humor and diligent work ethic.

"Everyone says you work too hard, but hard work makes Success," Effenbach said of her business in a 1987 interview.

Effenbaeh's father, Adolph purchased Oxford Market in 1923 when his wife Helen's tuberculosis necessitated their move to Saranac Lake from Washington, D.C. Effenbach and her brother Mark took over the business in 1947.

Effenbach Operated the grocery in various guises until this year. Over the years, she offered gourmet foods of all kinds, newspapers and other periodicals, and at one point, bus tickets.

The ethic of working hard to provide quality merchandise was something Effenbach always said her father instilled in her.

"He always told us to give your customer the best of everything. That's what you're there for to serve them. They'll always come back," she said in 1987.

Of her customers, who knew her as "Ruthie," Effenbach consistently expressed appreciation and enjoyment.

It's like a family. The same people come in the same time every day," she said.

A memorial service for Effenbach will be held at Hotel Saranac in Saranac Lake at 10 a.m. Tuesday, She will be buried with immediate family present at Adas Israel Cemetery in Washington, D.C. at a date to be determined.