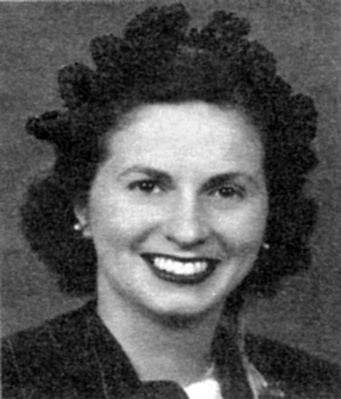 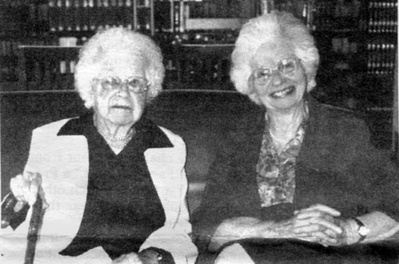 Florence Ruth Klein Hoyt, known as Ruth, of Paul Smiths, was a World War II veteran.  She was the creator and long-time curator of the Paul Smith's College Museum.

She was a daughter of Florence and Henry Klein of Homestead, Pennsylvania.  She earned a Bachelor in Science in Social Studies in 1938 and a Master of Science in Education in 1940 from the University of Pennsylvania. She served during WWII as a Navy WAVE, teaching pilots in the simulators. She received the Victory medal and the American Campaign medal. After the war, she completed her education at Syracuse University.

She met her husband Gould Hoyt when they were both house parents at Syracuse, introduced by the boys in Gould's house.  In the early 1950s, Ruth and Gould moved to Keese Mill Road in Paul Smiths, where they lived for more than sixty years. Ruth taught at Paul Smith's College in the 1950s and again in 1977, and helped Gould in many projects, including the building of the Forestry Club's cabin, the restoration of Paul Smith's Hotel's stagecoach, and the construction of the new church building across from the St. Regis Presbyterian Church.  She helped preserve historic artifacts from hotelier Paul Smith and his wife, Lydia Martin Smith.

Ruth played organ for the Presbyterian church on Keese Mill Road and also for the First Presbyterian Church of Saranac Lake, of which she was a member.

She is buried in St. John's in the Wilderness Cemetery.

Ruth Hoyt: The "WAVE" of PSC

…(Florence) Ruth (Klein) Hoyt is as much Paul Smith's College as is the leaning pine, the Bobcats, and the stagecoach—for it is through Ruth's extraordinary efforts and her countless hours of volunteer work that the history of Paul Smith remains a vivid legacy. The historic artifacts now on view outside the Adirondack Room [of the Paul Smith's College Library] reveal the College's unique history and its integral link to one of the most successful Adirondack entrepreneurs and his dynamic family. It is a rich tale that Ruth Hoyt recognized years ago, and she began to tirelessly preserve it for future generations.

"Ruth's energy and dedication to establish a museum and contribute to the archives for Paul Smiths has been recognized far beyond the College." Neil Surprenant, Director of Educational Resources for PSC said, "People call her up looking to share their historic memorabilia—not to mention their stories. She has been an unofficial ambassador for the history of Paul Smith's and the North Country for years."

Ruth has also held numerous other esteemed titles, official and unofficial in her lifetime. Born in 1916 in East Brady, PA. Ruth graduated at the top of her small rural high school and went on to obtain both a BS in Social Studies (1938) and a MS in Education (1940) from the University of PA. After student teaching and then attending night school at the University of Pittsburgh while working her first teaching job, she decided to join the U.S. Navy and direct her talents toward the American effort in World War II. As a Navy "WAVE," a term describing women enlistees, Ruth worked as a pilot training simulator operator, and then quickly established her abilities by managing the Flight Office.

"The Commanding Officers would come and go so often, that I quickly found myself doing all their work without the pay and title, of course."

With the end of the war. Ruth was pleased to find herself eligible for the GI Bill of Rights, and she enrolled in Syracuse University's Student Dean of Women program, majoring in Counseling and Personal Administration. Lo and behold, she met and was quickly intrigued by one of the Student Deans for Men. Mr. Gould Jennings Hoyt Jr., originally from Norwalk, CT, was also a veteran, and he was determined to secure his Master's degree in Forestry before marrying his new love. In August 1948, they were married and by 1949 they had begun a series of forestry experiences, positions and opportunities in upstate New York, which would ultimately lead them to Paul Smith's College.

The diversity of Gould's early experience as a junior forester, consultant, intern for the NYS Conservation Department, and sawmill operator and manager was by design. And, while it took him and his young bride from Cooperstown to Albany to Poughkeepsie, and then to Saranac Lake, it was time well spent. The broadening of his knowledge base was a perfect preparatory process for his ultimate career as an educator. Funny thing is though, that neither Ruth nor Gould knew it then.

A lifetime of contacts, friends, acquaintances and connections led the Hoyts on a rather circuitous trip to their final home here at PSC. In 1950, they moved to Saranac Lake for Gould's position with NYS Department of Equalization and Assessment, and while Gould enjoyed evaluating woodlands for tax purposes, he wasn't keen on relocating back to Albany when this was proposed to him in 1952. Though at first glance, Ruth thought Saranac Lake seemed like the "North Pole," she wasted no time in assimilating to her new surroundings and establishing a network of new friends. She joined the Women's College Club, immersed herself in community activities, and together they joined the Presbyterian Church on Church Street, where the Hoyts are still active today.

Among these contacts was Dr. E. Holt Hughes, a PSC professor and theologian who was recruiting both students and faculty members during the College's early years. With a little cajoling and counseling. Gould interviewed with President Chester Buxton and was astounded that he secured a teaching position after an interview that strangely centered around silence.

Ruth taught English composition at PSC in 1953-54, but she soon found herself quite occupied with her new baby girl, Jane Hannah Hoyt. As was mandated, the Hoyts lived on campus in an assigned second floor apartment of an original, hotel-era cottage. That is until Ruth told President Buxton, point blank and without discussion, that they were moving to their new home on Keese's Mills Road. Three years later, the family was complete with the addition of Edward Henry Hoyt.

Through the years, while Gould mentored and trained a legion of young foresters, Ruth worked as well. Once their children were in school, she taught at North Country Community College, and eventually balanced the schedule of family and teaching by focusing primarily on counseling students who were struggling and encouraging them not to drop out "We were educators together," she says of her 54-year partnership with her husband.

Among Ruth's other titles were the Executive Director of the American Cancer Society for Franklin County; Director of the Town of Brighton Senior Citizens; a member of the Delta Kappa Gamma— International Society of Key Women Educators; and the unofficial historian of Paul Smith's College.

Through a casual telephone invitation some 25 years ago by Natalie (Bombard) Leduc '51 (former PSC instructor of Physical Education) and Aida Stainback, (wife of then PSC President Thomas Stainback '48). Ruth was gradually introduced to the enormous amount of historic artifacts and treasures that remained scattered around the community from the hotel era. Little by little, invaluable pieces of the Paul Smiths puzzle were coming together, and the Board of Trustees assigned a committee to manage the historical artifacts and archives in 1977. The committee included Neil Surprenant, Michael Kudish, Natalie Leduc, Aida Stainback and Ruth Hoyt. Very quickly, it became apparent that the archives and artifacts needed an official home, and two rooms were secured in the basement of Cubley Library, Ruth took charge to assemble a meaningful museum. Today, many of the artifacts are in the display cases outside the Adirondack Room, adjacent to the Ruth Hoyt exhibit area in the new Library.

Interestingly and ironically, as Ruth has managed to secure a proper place for the legacy of Paul Smith, an original Adirondack entrepreneur and hotelier. Gould nurtured the educational mandate of Phelps Smith, whose last will and testament directed his estate to establish a college of arts and sciences that would bear his father's name. And together, through the Hoyts long partnership and their shared life of rich experiences, they have designed a legacy all their own.

Editor's Note: In keeping with their life-long tradition of working together, both Ruth and Gould are currently recovering from hip surgery and knee surgery, respectively. The Paul Smith's College community wishes them both a speedy recovery.