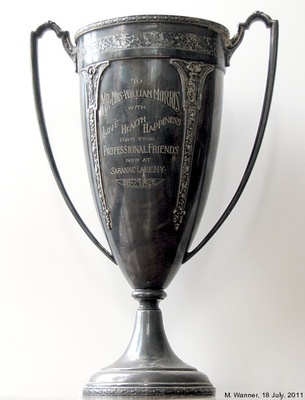 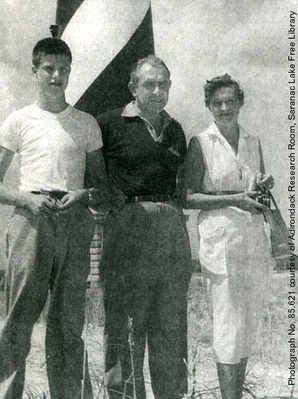 Ruth Morris was the daughter of William Morris, the theatrical agent, and his wife, Emma. Ruth came to Saranac Lake as a three-year-old, when her father was here to be cured of tuberculosis. She became an actress, a vice president of the William Morris Agency and a writer for King Features Syndicate. Locally, she painted with a group led by Sarah Joffe, a founder of the group that later developed the Paint & Palette Festival, held each summer, and still going at the turn of the new century.

Ruth Morris married William Chapman White, the author. In 1970, Ruth, Bill and their son returned to make their home at Camp Intermission on Lake Colby, which had belonged to her parents. Ruth served on the board of the Saranac Lake Free Library and was an active member of the Village Improvement Society and the Head Start committee. Bill White's columns on the Adirondacks were compiled into a book titled "Adirondack Country."

After his death, Camp Intermission was sold to New York state and is still in use today as an environmental camp for children. The Adirondack Research Room is named for Ruth and Bill White, who are buried at St. John's in the Wilderness church in Paul Smiths.

Mrs. White first came to Saranac Lake when she was three years old and her father, the theatrical agent William Morris, was here to be cured of tuberculosis. She was born in New York City, the daughter of Mr. Morris and Emma Berlinghoff Morris, and educated at the Barnard Preparatory School there and at Tufts College.

Later she was in the cast of the first Garrick Gaieties and was a member of the John Golden Players repertory company.

She had written a column on women in show business for Variety Magazine and had been a feature writer for King Features Syndicate.

She was married to the late William Chapman White, the author and Herald Tribune columnist.

They and their son, William M. White, now of Berne, N.Y., came to Saranac Lake In 1970 to make their home at Camp Intermission which had belonged to her parents. Mr. White's columns on the Adirondacks were incorporated into a book, "Adirondack Country."

After her husband's death, Mrs. White completed a book he had been writing, Tin Can on a Shingle, the story of the Monitor and the Merrimac. She also edited the second edition of "Adirondack Country," inserting material on events that occurred after his death.

Also after his death, Camp Intermission was sold to New York State which used it as an environmental training center for children. Mrs. White was an ardent conservationist herself.

She also wrote, Yankee from Sweden described as the dream and reality in the days of John Erickson, the builder of the Monitor.

At the time of her death she was a vice president of the William Morris Agency, concentrating her efforts in the play department, She also had been working on a biography of her father.

She had gone to Miami to take training for her physical condition. Her brother, William Morris of California, had been learning to walk for exercise and to cook special healthful dishes. He and his wife had planned to go next week with Mrs. White to Longboat Key, Florida, for the winter holidays.

She had dressed for dinner last night and was leaving her room at the center when she died.

At her request there will be an autopsy through the Heart Association. Her body will be brought to Saranac Lake for burial, with her husband's at St. John's in the Wilderness Church at Paul Smiths. Funeral arrangements which are in the charge of the Fortune Funeral Home are incomplete.