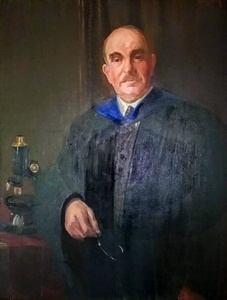 Strashimir Attanos Petroff, Ph.D., was a medical researcher and director of the Saranac Laboratory. (His middle name was given as Alburtus in an obituary.) Trudeau Institute has a portrait of Petroff, possibly painted by his son, Gilmer. The family lived at Trudeau Sanatorium, in the Bacteriologist's Cottage.

GREENVILLE, S. C, Nov. 27 (AP)—Dr. S. A. Petroff, who claimed the first disassociation of the tuberculosis bacillus, died at 8 o'clock last night of coronary thrombosis at a hospital here. He was 65.

Dr. Petroff came to Greenville from New York about three years ago.

He was a native of Russia. In 1901, he came to the United States to be associated with the Trudeau sanatorium, Trudeau, N. Y.

He received his Ph. D. degree from Columbia University in 1920 and in 1928 was awarded an honorary degree of Doctor of Science by Colgate University.

Funeral services will be held in Toccoa, Ga., on Monday with burial following in the family plot in Toccoa. He is survived by his wife, one son, Gilmer; and two grandchildren.

Dr. Petroff came to Saranac Lake and worked as a research operator at Trudeau sanatorium before becoming a member of the Trudeau Foundation staff in September 1919.

During his research at the Foundation Dr. Petroff continued to investigate and protest Bacillus Calmette-Guerin, the BCG - vaccine which Professor Calmette of France developed and used to innoculate infants against tuberculosis.

Dr. Petroff did much research to prove that injections of the live bacilli were highly dangerous. Attending a congress on tuberculosis at Rome in 1928, Dr. Petroff was asked by the International Board of Health, sponsored by the League of Nations, to address a meeting at Paris on Oct. 15. 1928.

He did so, objecting for 1 1/2 hours to the variability of the BCG cultures.

Through research in the Trudeau Foundation laboratories of which Dr. Petroff became director, the Saranac Lake scientists developed a heat killed tubercle bacilli which they advocated for use in the immunization of children to tuberculosis.

In the early 1930s, when 73 children died in Lubec, Germany, following injections of BCG vaccine, Dr. Petroff returned to Europe to investigate the incident at the request of the German government.

Through his efforts opposition to the BCG vaccine grew in Germany and Europe.

Dr. Petroff left the Trudeau Foundation in November, 1935, and went to California. In June, 1937, he was appointed director of the research laboratory at Sea View hospital in New York city.

Did Research at Trudeau

In experiments in the tuberculosis laboratory at the Trudeau Sanatorium, Trudeau, N. Y., Dr. Petroff found that tuberculosis bacteria in animals contained three types of bacteria, which gave clews to the composition of tuberculosis germs in man.

He worked extensively on projects to break the human tuberculosis bacilli into their component parts, and he experimented with tuberculosis vaccines. This work led him to condemn the B. C. G.  tuberculosis vaccine as dangerous to infants and he attacked it for a number of years in papers and speeches.

Dr. Petroff was born in Bulgaria and came to the United States in 1900. In 1909 he became a member of Trudeau's research staff, and in 1921 he was named director of medical research there, a post he held until 1935. After a number of years in tuberculosis research at Sea View Hospital, West New Brighton, S. I., he moved to Greenville in 1945.

Dr. Petroff was a member of the American Society of Bacteriologists . . . [missing]

A document from the Supreme Court, Third Judicial District, New York State, dated July 5, 1928, certifies that the records of the Court show that one "Strashimir Attanos Petroff" files Petition No. 138 to become a U.S. citizen on September 28, 1908. He swore that he was born in Varna, Bulgaria, on August 20, 1883; and that he was then residing in Slingerlands, Albany Co., NY. He had arrived at the port of New York on July 8, 1901. He became a citizen of the U.S. on January 4, 1909.